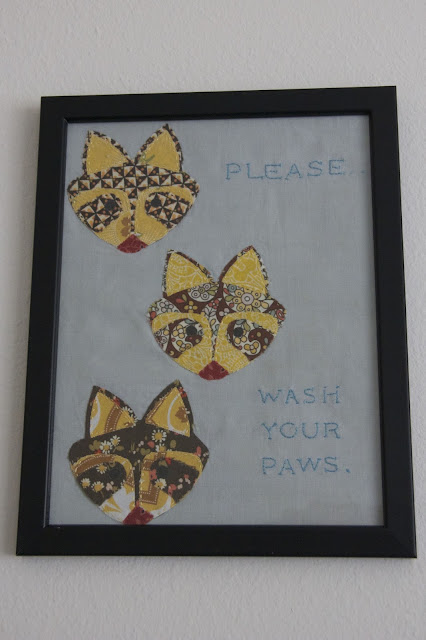 Here is an embroidery piece that I made for my sister's kitchen. My sister was a wildlife rehabber for a while, and one summer she raised a litter of raccoons. They liked to climb up on her head and play with her hair. I'm still jealous!

I'm adding this post in the waning hours of Anne's latest Pin to Present linkup. The raccoon face template for my project came from a free pattern provided by Rachael of the blog Imagine Gnats. Around the time of the pattern's release, Rachael featured a whole week of projects made with it. I think these raccoon elbow patches are adorable, but I decided to go in a different direction with my efforts.

If I remember correctly, around that time my sister and I went thrifting together and she wanted to buy some blue-and-white Japanese bowls but wondered if they would go with her kitchen, which is painted yellow. So part of the point here was to say Yes We Can combine blue and yellow in the kitchen. (I think that's a very kitchen-y color scheme, myself.) 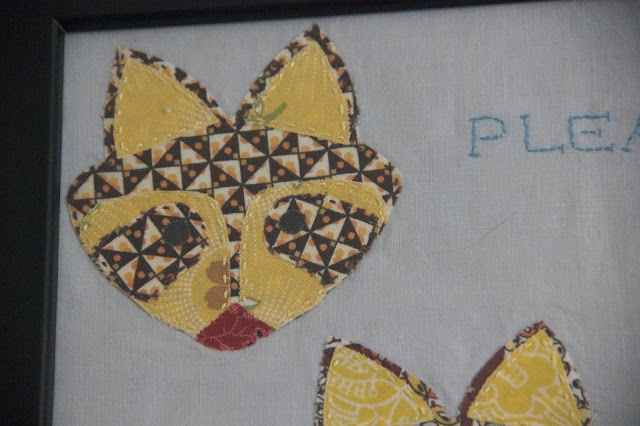 Many of the fabrics I used for the raccoon faces are Liberty of London quilting cottons that my sister had given me for my birthday. I liked the idea of turning around and giving something made from her gift back to her.

I used fusible web to assemble the raccoon faces, then hand-stitched around the edges of the different bits of patchwork. If I were starting this project today, I'd use Wonder Tape instead. Sewing through five layers of fabric and fusible web is no fun! 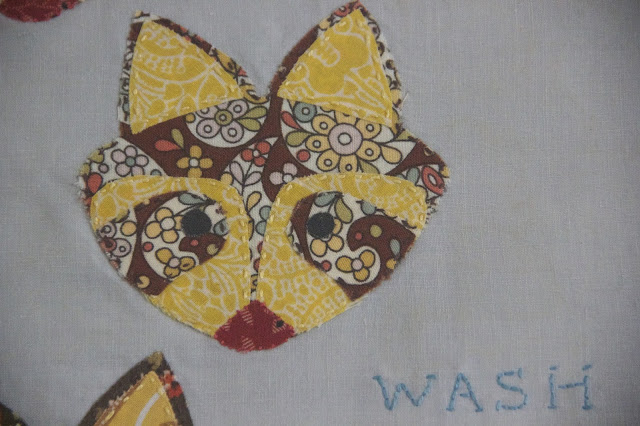 To add the text, I printed out the words on a sheet of paper on my home printer and then traced them through the fabric. I'm pretty sure that's how I did it, anyway. If I sound a little vague and uncertain about all of this, it's because I started this project over two years ago. Even though it's a simple project it took me quite a while to finish it, even longer to frame it up and give it to my sister, and yet more time to blog about it. 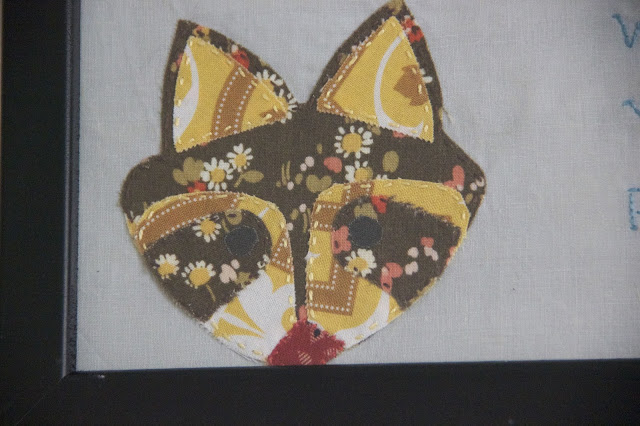 It sounds like I'm castigating myself here, but I'm not. I think it's good to remember that sometimes, for all sorts of reasons, inspiration takes a while to come to fruition, and that's okay. One of the nice things about Pinterest is that it can hold on to our inspiration until it ripens. The other thing that this project reminds me -- and this is a good thought to keep in mind when I get overwhelmed by all the productivity and seeming perfection out there -- is that inspiration doesn't have to be direct. We don't have to copy someone else's project, we can go our own way. We can snuffle around in the creative soil, pluck out the best bits like juicy grubs from here and there. Steal a bit, like the masked bandit you are, but judiciously. Be creative like a raccoon.
Posted by Sarah at 8:33 AM