How to plan a crafty weekend retreat 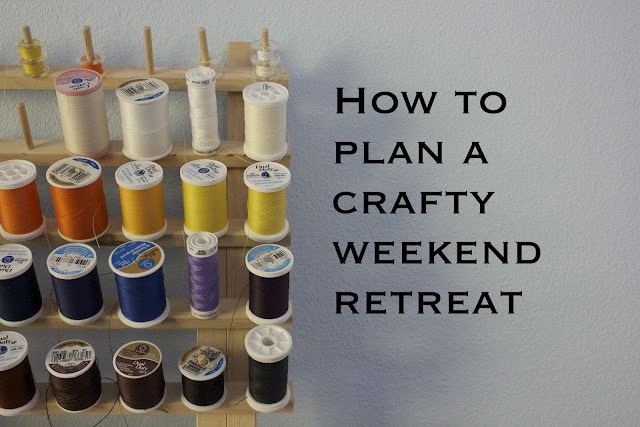 Finally, I am back, with some thoughts on the crafty weekend getaway I had with a group of friends a month or two ago, and how you can enjoy one too.

I feel a bit sheepish typing out all this advice, because really, it was not rocket science. Not even lace knitting, or setting a pocket into a princess seam--nothing nearly as complicated as that. But a couple people have expressed that they were eager to hear how we pulled this off, so here goes.

The main thing I want to express is that you can do this! I think a lot of us crafty types tend to look longingly at other people's blog posts recounting their adventures at Squam Art Workshops, or Sewing Summit, or whatever other big-name craft retreat is happening somewhere in the country this month. And yeah, I bet those events are awesome! But you can grab a group of friends and go to a cabin nearby for a lot less money, and it will still be plenty inspiring and productive.

Also, when we were planning this event, a couple of participants expressed nervousness about not being "creative enough" to come along. Seriously? Let's just nip that talk right in the bud. Because I think that if spending a weekend at a cabin with a half-dozen people who are sewing/knitting/drawing/building with Legos/whatever sounds remotely appealing to you, then you are creative enough.

Anyway, here's what I did, step by step:

1. Find your people.
I put out a call on Facebook--just posted a status update asking who might be interested in going away for a crafty weekend. People liked the idea! A couple friends-of-friends ended up in the group, but Facebook was a handy tool to get the ball rolling.

Our retreat was 2 nights--we arrived at the cabin around 5 pm on Friday, and left around 2 pm on Sunday. I think 2 nights is the minimum--if you only had 1 night you'd barely have time to get started on the making. I'd actually love to go for 3 nights next time.

3. Find a place.
I wanted someplace that felt like a getaway, but with modern conveniences so that we could focus our time on making stuff instead of, you know, building a fire to make the house warm. We ended up here and it was just about perfect.

I recommend starting early. We were looking to book about 2 months out and a lot of weekends were already spoken for. We would have had more choice if we'd started the process about 3 months before our planned event. Yes, even in late winter.

4. Invite some more people.
Once we had those basics figured out, a couple of us issued broader invitations. I think only one or two people joined the group at this stage, but we already had a big enough group to make the finances pretty workable. My thought here was that if it worked for more people to come along, great, but I wanted to make sure that the plans accommodated the schedules of those who were definitely in from the beginning.

5. Leave some breathing room.
The place where we stayed sleeps 8, and we were 6 people (plus 2 large dogs). I think it would have felt crowded (though still doable and probably totally worth it) if we'd had the maximum of 8 people. Especially if we'd had more sewing machines! Anyway, don't feel like you have to max out the bunkhouse.

6. Figure out logistics.
About a week beforehand we started furiously sending around emails to work out carpools, meal assignments, etc. This was a remarkably self-organizing process. And it's nice to split up the gear-hauling assignments, so one person can bring the ironing board and another can bring the iron. I recommend you have your own sewing machine, though!

7. Plan your menus.
Each person was responsible for providing one meal for the group. We didn't coordinate menus beforehand, though we did share any dietary restrictions or strong dislikes. We ate very, very well, and it was nice only having to worry about one meal--all the rest of the delicious feasts appeared by magic.

We had 6 people and 6 meals, so each person just took one meal. If you had more people than meals, I imagine you could double up on dinners or something like that.

In addition to food for your meal, I'd recommend bringing a bottle of wine or other tipple (if you're into that), and a bit of something snacky or chocolate to share. And make sure someone (possibly the breakfast crew) has coffee and tea covered.

Another pro tip: I was in charge of dinner the first night we were there, and I brought soup I'd made the night before. I was really glad I'd made it ahead, as we got to the cabin a bit later than we'd expected (inevitably, I suppose), and arrived hungry!

8. Claim your bed.
Actually we didn't figure this out until we all arrived at the cabin, and that was just fine. So, you know, chill.

But I did want to mention that we established one bedroom as the ironing/cutting room, and kept the dogs out of there while crafting was afoot. That way we didn't have to worry about pups tracking mud over fabric or knocking over the ironing board. Which would not have been fun to worry about, let alone deal with!

9. Settle up.
I made the lodging reservations and offered people the option of sending me their share of the lodging fee via PayPal or check. (Everyone chose check, which I guess is neither here nor there, but interesting.) This did mean that I fronted the money, since the place where we stayed charged half the fee up front and the other half 2-3 weeks before our stay, and other participants reimbursed me during the trip. That wasn't a problem for my bank account, but it's something to be aware of.

People also figured out gas money among themselves, and each person was responsible for the cost of the meal that they provided. (Which I think is a useful approach, because if you're not feeling so flush you can sign up for a breakfast, or make an inexpensive dish, you know? Although I will say from experience that a simple meal of soup is, um, not so cheap once you add fancy cheese, artisan bread, and nice wine. Oh well!)

Between lodging, gas, and food, I think the cost of the weekend was about $250 per person. (Those who brought their dogs paid a bit more, because they covered the per pup/per night fee for their dog.)

10. Do it again!
Yeah, there is totally going to be a next time.

I would go back to the place we stayed in a heartbeat, although one friend and I have talked about just convening at her house here in Seattle. Pros: way cheap (so we could do it more often), and less driving (so we could spend more time making). Cons: no hot tub. Admittedly, a tradeoff. But I think that would work just fine.

What did I miss?
Let me know if you have other questions in the comments, and I'll do my best to answer.
Posted by Sarah at 7:17 AM