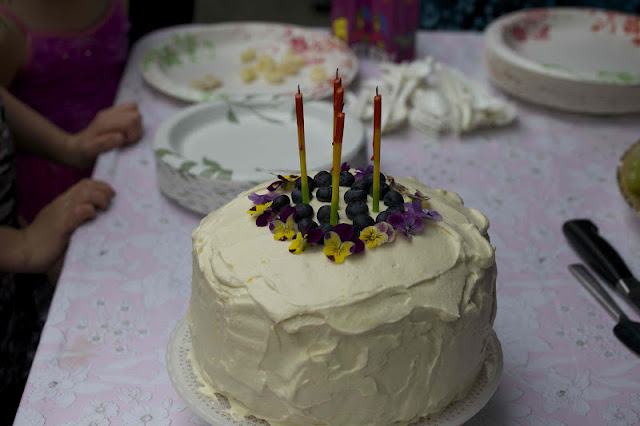 So here is what I wanted to say about that rainbow cake that I made for my girl's birthday party.

The short version of all this is that you can make a rainbow cake if you want to. Really, you can.

That's an important thing to say because I feel like rainbow cakes are kind of A Thing now, you know? They're like the avatar of Over-The-Top Internet Prettiness. I mean, there are whole Pinterest boards dedicated to rainbow cakes.

And Pinterest--and blogs and the Internet more generally--have come in for some criticism lately. There are those who say pretty pictures on the Internet are making us all long for an impossible life, and feel like our own real lives are not up to snuff--insufficiently pretty, inadequately styled.

It's almost as if the Internet automatically makes a thing seem less attainable. Oh, there's a pretty picture of a cake/quilt/living room on Pinterest? It must be too hard/complicated/expensive for me.

And it's true that the vast sea of "inspiring" photos, unmoored from a sense of how they came to be, can encourage that attitude.

But I don't think it has to be that way. I think that with time, care, and a little forethought, a lot of projects that may at first seem intimidating are well within reach. And frankly, pulling this sort of thing off can be pretty thrilling. 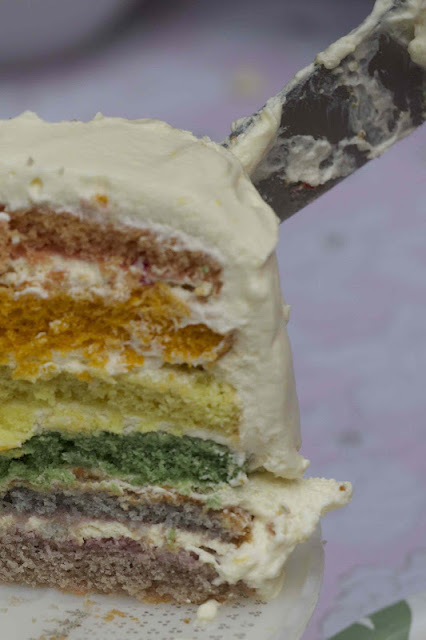 Anyway, as to the rainbow cake specifically, here is how I did it:

-I used this recipe for the cake layers. It's a pretty simple vanilla cake with a straightforward method--cream butter and sugar, add dry ingredients and wet ingredients alternately, you probably know the drill.

-Making the cake took about 2 1/2 hours from start to finish, including cleanup. Probably the biggest chunk of time was for greasing the cake pans and lining them with parchment! So it's tedious and repetitive at times, but not particularly fiddly.

-I suggest borrowing cake pans so that you have 6 on hand. (It takes a village to bake a birthday cake these days!) This is more time efficient and you don't have to worry about the leavening in your batter giving out while you wait for cake pans to cool etc.

-But 6 pans wouldn't fit in my oven at once, so I baked 3 layers at a time, turning the pans 180 degrees and switching their positions on the oven racks halfway through baking.

-After mixing up the batter, I divided it into 6 smaller bowls (I just eyeballed it and the portions turned out equal enough). I added the food coloring to the first 3 bowls, transferred these to their cake pans, and put them in the oven. Then I mixed up the remaining 3 colors while the first 3 baked.

-I used this natural food coloring, which I found at Whole Foods. (Yes, it is kind of breathtakingly expensive. Who needs a college fund anyway?) The colors are more pastel than lurid, but I'm okay with that. Also, I ended up with a couple of spots of darker/unmixed color, especially in the pink layer, so mix thoroughly and carefully.

-I wish the recipe had been clearer about how many servings the cake made. Each cake layer is quite thin, so despite the cake having 6 layers it is not particularly tall. It basically makes 12 normal-sized slices of cake, or, if you have a crowd to feed like we did, 24 veeerrrrry thin ones. 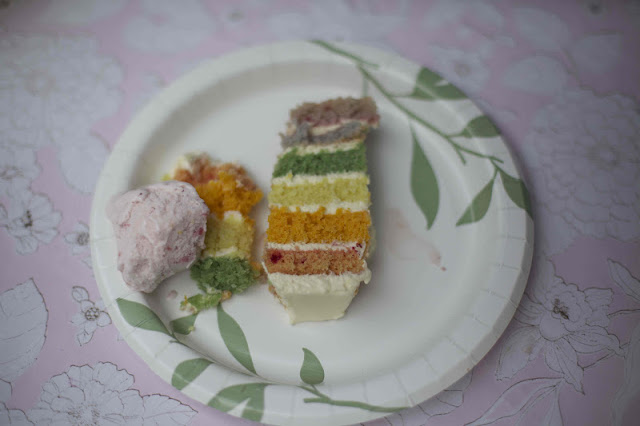 -I took a look at the frosting recipe associated with the cake and thought: no freaking way. It just sounded way complicated and prone to disaster. So instead, I used a recipe for Lemon Cream from the Macrina Bakery & Cafe Cookbook.

-The book is still in print, so I won't reproduce the recipe here, but I will say that basically it's lemon curd folded into whipped cream. Simple and yum!

-The frosting does wilt rather quickly once out of the refrigerator, so if you're in a super-hot climate it might not be the best choice.

-Making the frosting and assembling the cake took another hour and a half or so.  A good portion of that was stirring the lemon curd--so again, tedious, but not difficult.

(Yes, that's a four-hour cake there. I'm aware that it's a luxury to have that much time to make a cake--and good grief, not everyone would or ought to choose to fill four hours that way!--but let's be honest, as luxuries go this one is pretty unobjectionable. Also, I am pretty sure my man spent at least that much time killing zombies last weekend. I'm just saying.)

-I was VERY intimidated by the prospect of assembling the cake! But since the cake layers are quite thin and light they are relatively easy to manipulate without breaking. It was just a matter of working step by step, layer by layer.

We only got a couple of pictures of the inside of the cake--which kind of makes me cry, but hey, we are not professional bloggers, there was a party going on. So here you have it, completely un-"styled," this is exactly as good as this cake looks in real life: 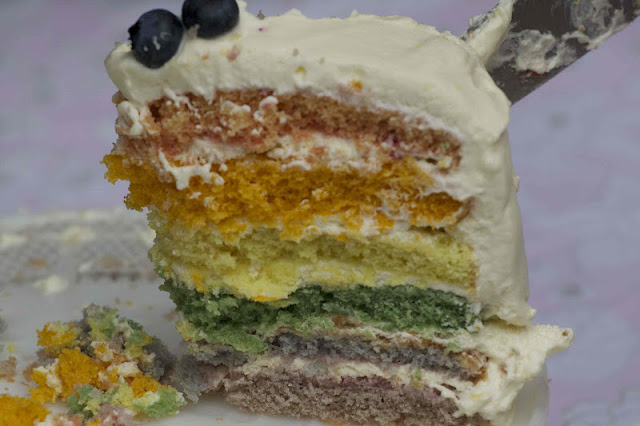 I am not a particularly experienced baker. (Unless by "experienced baker" you mean "capable of constructing a remarkably lifelike rendering of reindeer feces from butter, flour, and chocolate," in which case, yes, that's me!) But my basic skills were up to the task here, and I think that yours would be too. So go forth, and bake rainbows!
Posted by Sarah at 10:47 AM