On symmetry, yet again 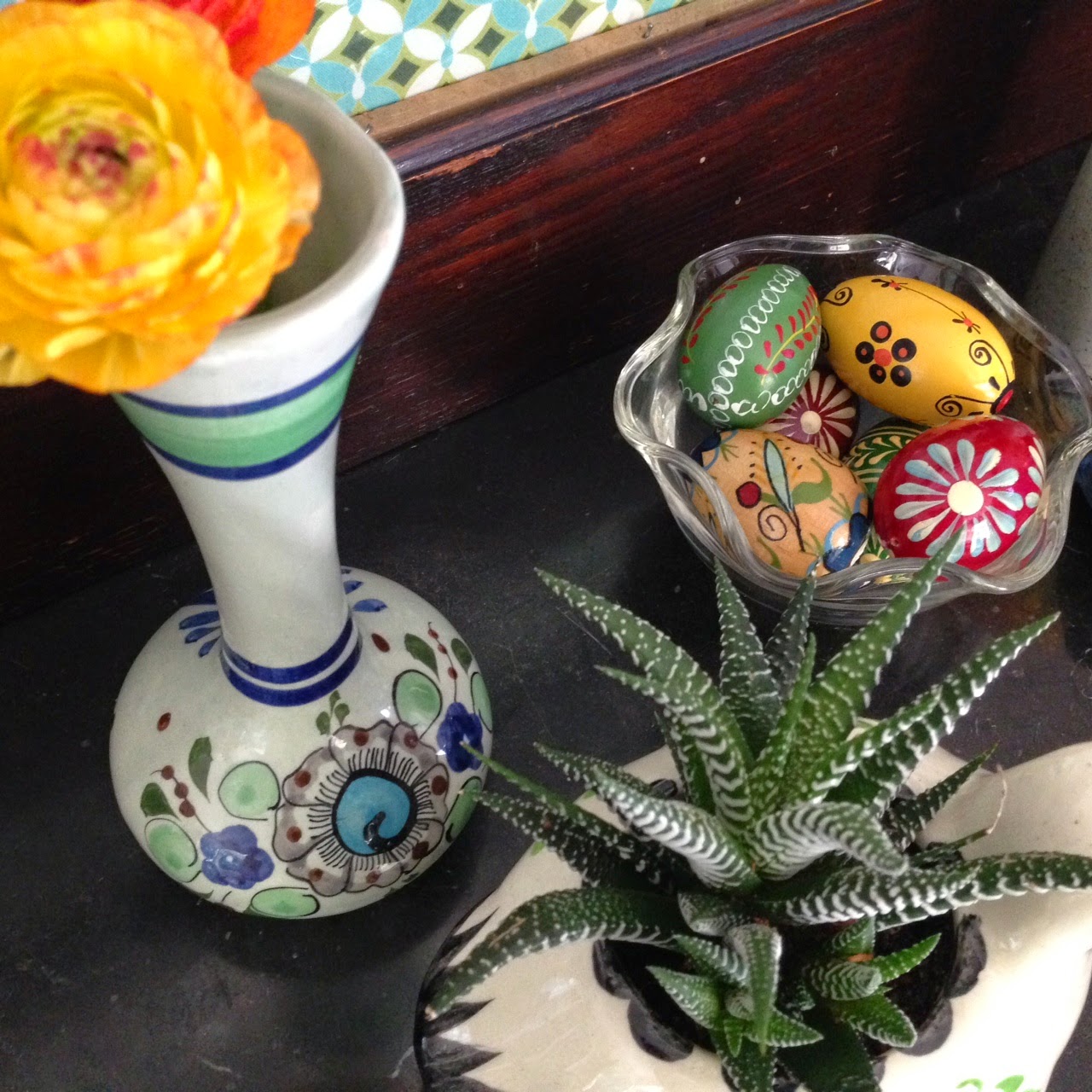 I've written a couple of times before about symmetry at this time of year, so I guess it's clear by now that's what April means to me. In any case, symmetry was definitely on my mind as I worked out my April contribution to "Styling the Seasons," a monthly project hosted by Katy of Apartment Apothecary and Charlotte of Lotts and Lots.

Every year around Easter time I display these wooden pysanky eggs that belonged to my husband's grandmother in this glass bowl that belonged to my grandmother. For me there's a kind of comfort in having a few things that I arrange in the same way year after year: symmetry across time and, in this case, a connection across generations, too. 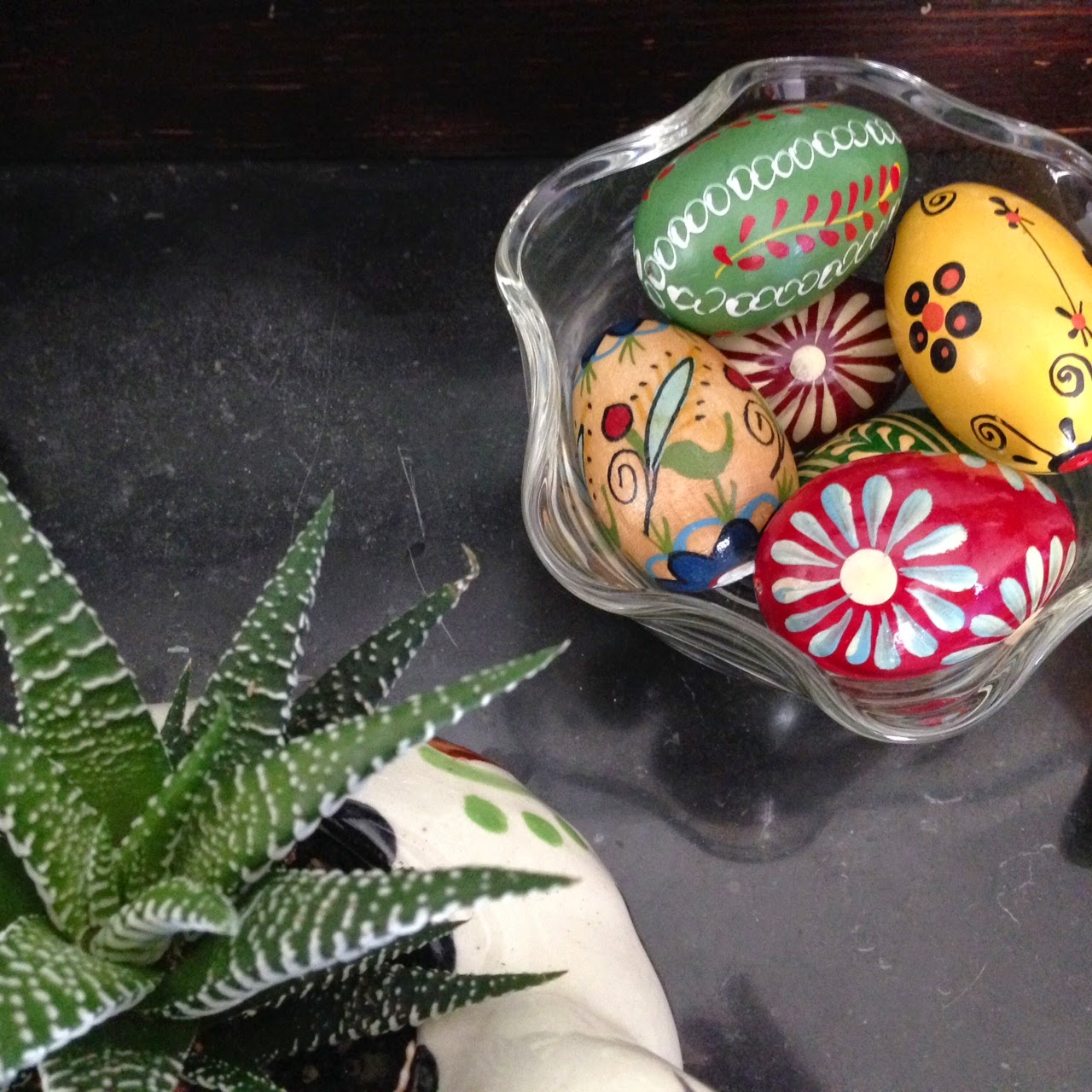 This year I realized that the designs on the pysanky eggs, a traditional craft from Eastern Europe and the Ukraine, echo the motifs on this Mexican bird-shaped planter (birds themselves also being a design often found on pysanky eggs), and on a couple of other Mexican vases I've picked up at thrift stores. I love these sorts of connections between folk art motifs from different parts of the world: symmetry across space, here. 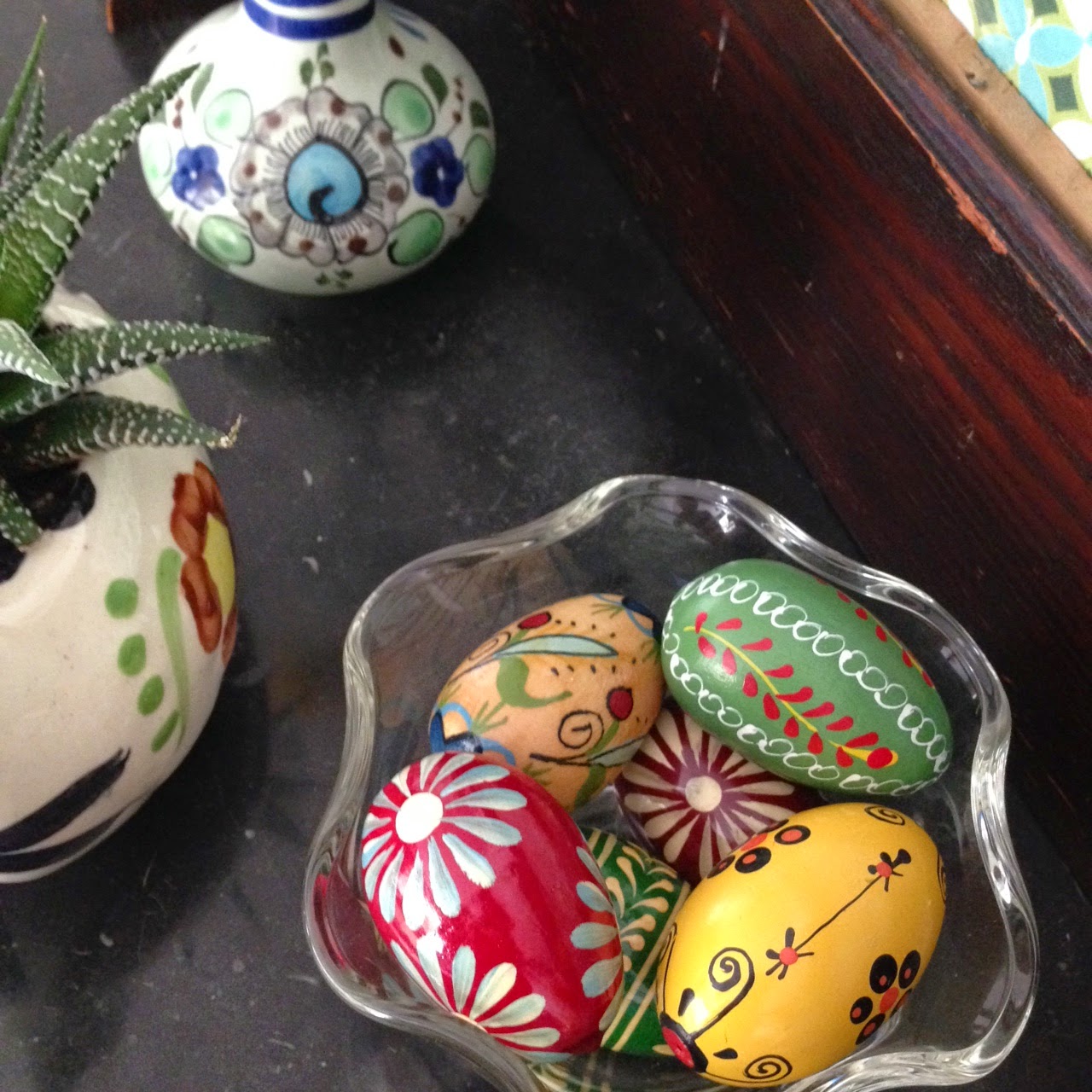 Then, there's a more abstract kind of symmetry to April. I grew up in a strongly Christian household, and while I'm not a practicing Christian now I find that the faith's stories and archetypes, like the bittersweet symmetry of death-and-rebirth, are still deeply rooted in my psyche.

I've seen those symmetries echoed in my own life as well; for example, a few years ago my husband's father passed away while I was traveling to Arizona for my grandfather's memorial service. This was over Easter weekend, even. 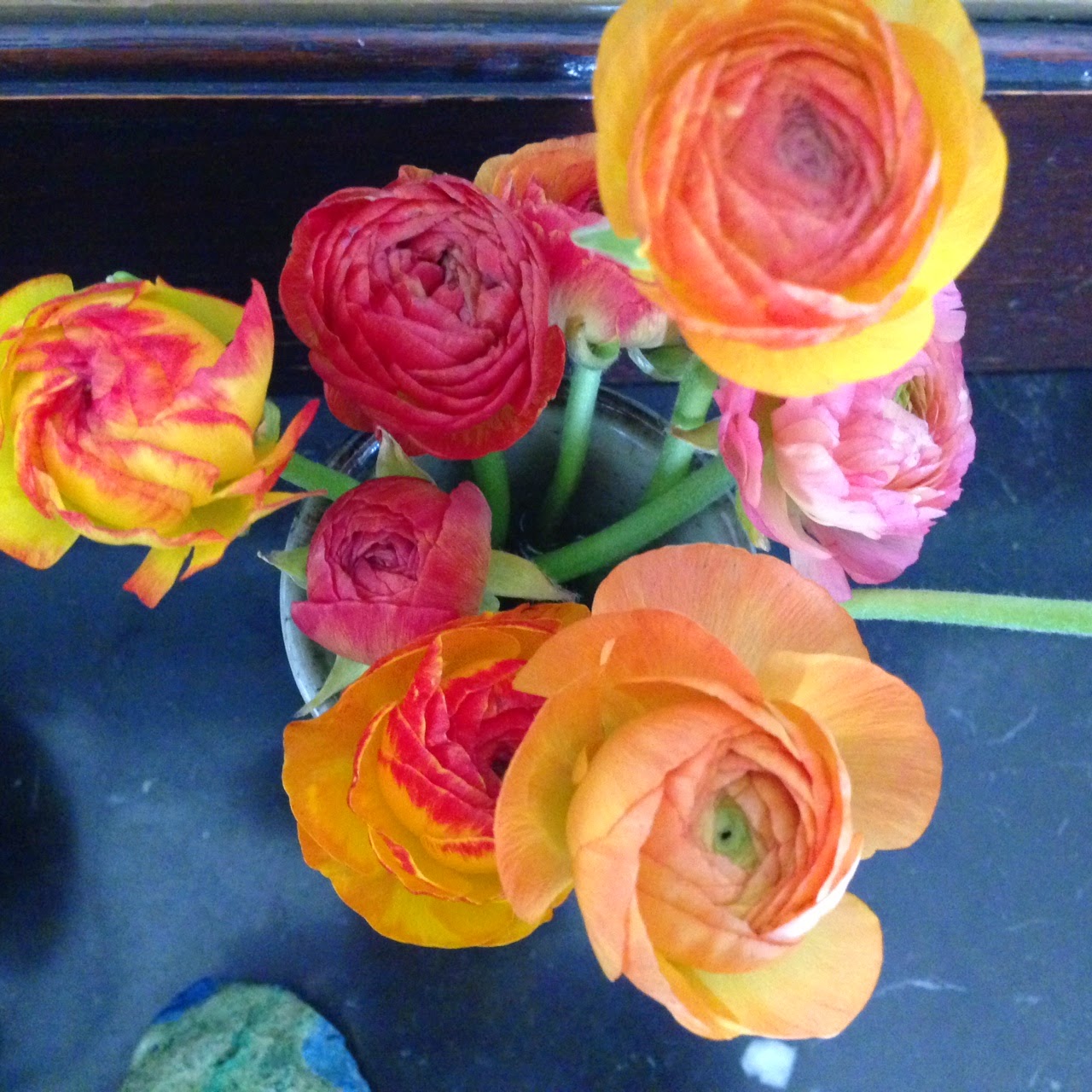 I thought about this history, and I thought about how cut flowers, for all their beauty, are also incredibly evanescent -- especially the sorts of tulips and daffodils that I brought home throughout March. (This is particularly so in my home: I'm pressed for time and probably a little lazy to boot, so my vases tend to spend more time displaying wilting flowers than fresh ones.)

And so in addition to those ephemeral flowers, this month my dining room sideboard gets a hardy succulent as a kind of bulwark against impermanence. Maybe it's these layers of meaning, maybe it's the crazy zebra stripes on the plant, or maybe it's the funny skeptical expression on the bird's face, but this little scene makes me smile every time I pass by it. 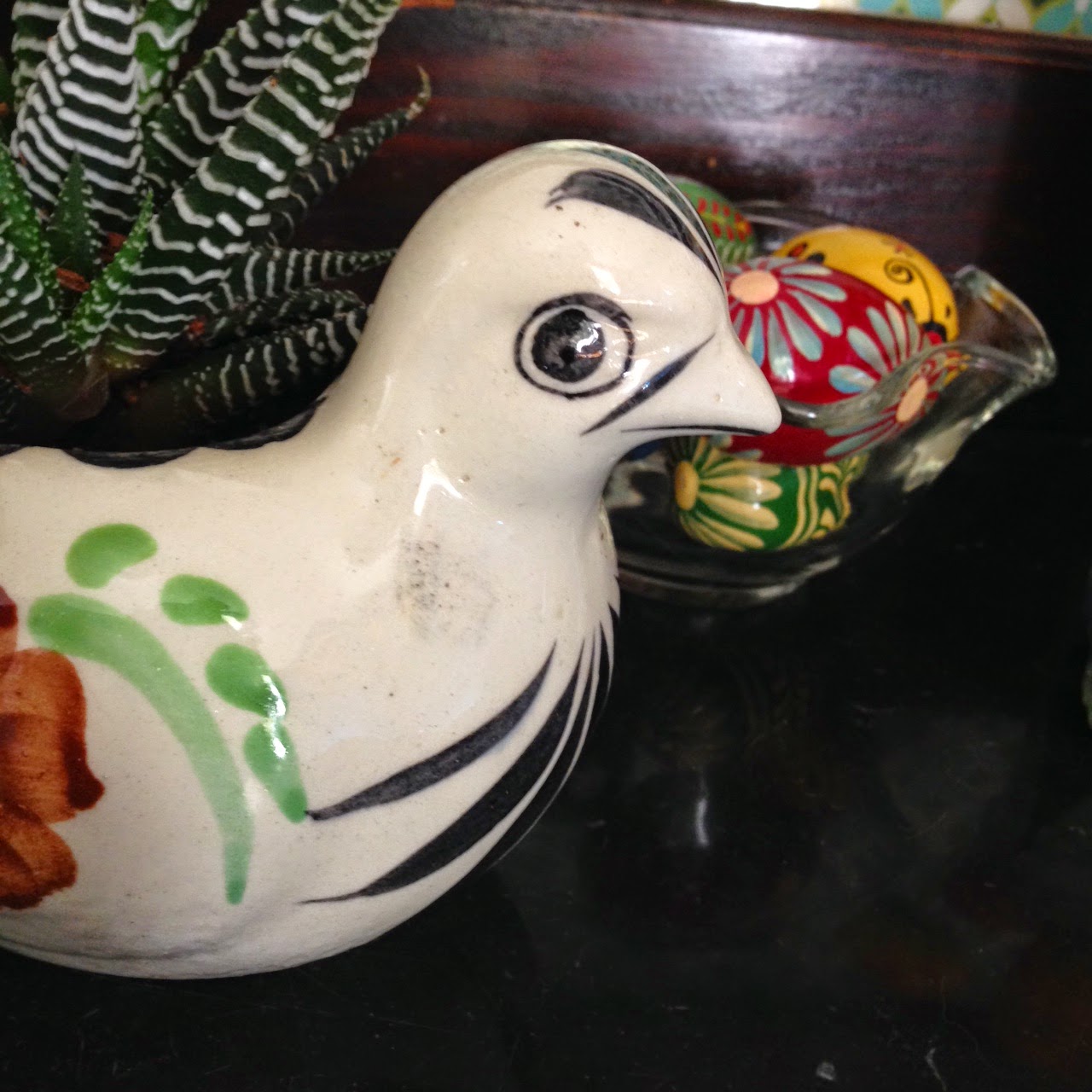