In my last post I mentioned that I have some ideas for blogpost series; here is one of them. Now, by this point I know that the most reliable way to ensure that I don't blog at all for six months is to say that something is coming "in my next post" or "later this week," so I won't make any promises along those lines. Let's just call this the first in a possibly-occasional series.

Anyone who has dipped a toe into the lifestyle, home, or minimalist blogosphere over the past several years probably knows the William Morris quote I'm alluding to in the title of this post:

"Have nothing in your houses that you do not know to be useful, or believe to be beautiful."

It occurred to me that much of the time, when we invoke these words it is in one of two contexts: I got rid of a bunch of stuff that was not beautiful or useful; or, look at the new thing I bought (or made), isn't it beautiful. And both of those types of posts have their place. (In particular, you know I am a huge sucker for a good decluttering Cinderella story.)

But we don't talk much about the objects that we do decide to keep in our houses, how they might become more beautiful with use, and why certain things stand the test of time.

So this series aims to correct that balance a little bit: I'll choose an object from my home that passes the William Morris Test, and talk about why. Some of these items might be mostly useful, others mostly beautiful, and a few might even have that elusive, near-perfect fusion of both qualities. Some items might be things you could buy at a store, some will be old and not available anymore, and others will be entirely one-of-a-kind. But this isn't about recommending a product.

Instead, it's about giving worthy objects a moment in the spotlight. I hope this exercise will help me appreciate the things in my home a little bit better, as well as understand what qualities make an item likely to become beloved. Maybe you're interested in considering objects in this way too? 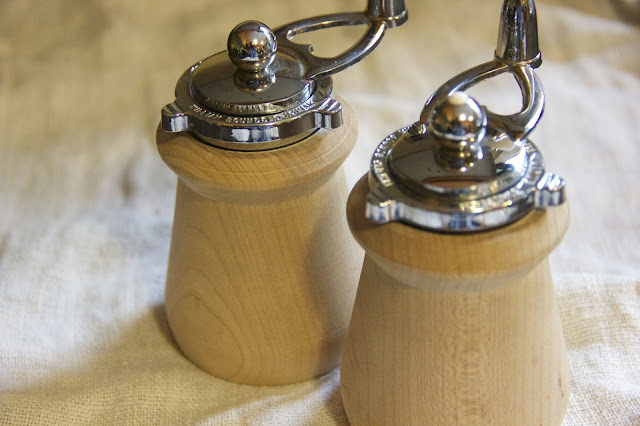 Summary: I bought these matching salt and pepper mills two years ago as an anniversary present for my husband. The materials they are made of don't have anything to do with the prescribed gifts for the ninth anniversary (which are willow or pottery in the traditional system, and leather in the modern), but our kitchen was in need of a pepper grinder of better quality, and less wastefulness, than those grocery store plastic bottles of peppercorns with a built-in grinder we'd been using up until then. I picked these partly because the barrels are made of unfinished wood; I liked the idea that they might develop a patina over many years of handling and use. Maybe I will feel differently when I am older, but right now I think an anniversary present should be more about celebrating a relationship's future than its past. (And along anniversary-gift lines, the heart-shaped cut-out in each handle is a nice touch, too.)

The two mills look identical except that the knob at the top of the pepper version is silver, while that on the salt version has a dot of white enamel. Once you've noticed this you're unlikely to mix up the mills and put pepper where you wanted salt or vice versa, but the subtlety of this marking makes them a pleasingly matched set. I like the authenticity of their materials and their modest size: they fit nicely in the hand, and are easy even for a child to manipulate (admittedly, the salt mill has been tested more rigorously than the pepper mill in this regard).

And while it's mainly the meaning of these objects -- or my idea of their future meaning -- that makes them special to me, they are undeniably useful as well. The cranks turn easily and and efficiently, though you can feel a pleasing crunch as the blades slice into a peppercorn or a salt crystal. The blades have never yet gotten gummed up or stuck, and the simple, straightforward mechanism makes me confident that they will continue working for a long time to come. And now again I think we might be back to metaphor. 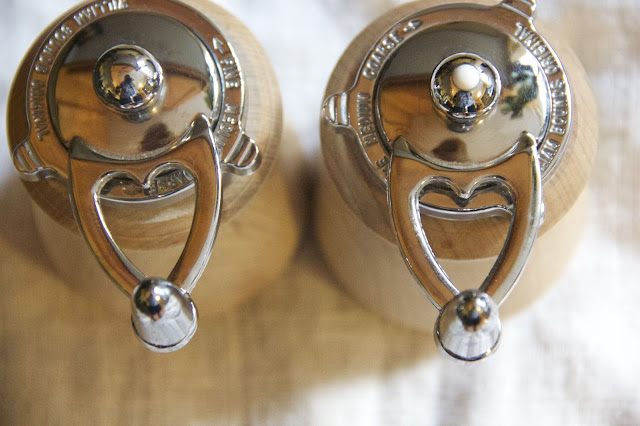 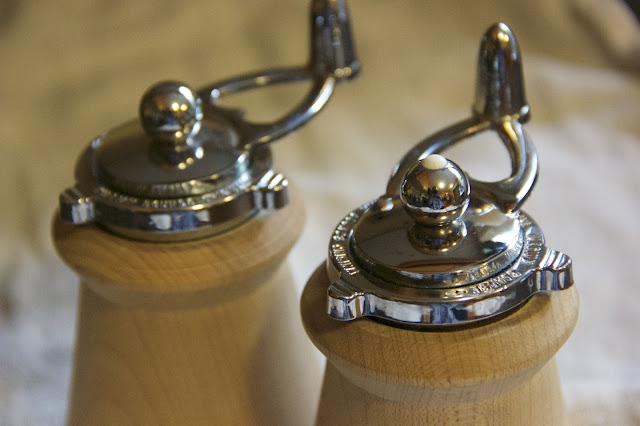