I've been thinking recently about making some of my own clothes. This isn't really a new thing for me; it's an interest I've circled back to periodically although I have to admit that I've never gotten very far with the actual making*.

This current burst of interest is, unsurprisingly, connected to all the thinking that I've been doing in recent months about the size and structure of my wardrobe. I have a better sense now not only of exactly what I want to wear, but also of what items would make my closet work better. Cue impatience when I can't find the items from my mind's eye in stores, either secondhand or retail.

The idea of what to make first is connected to this souvenir from our London trip: 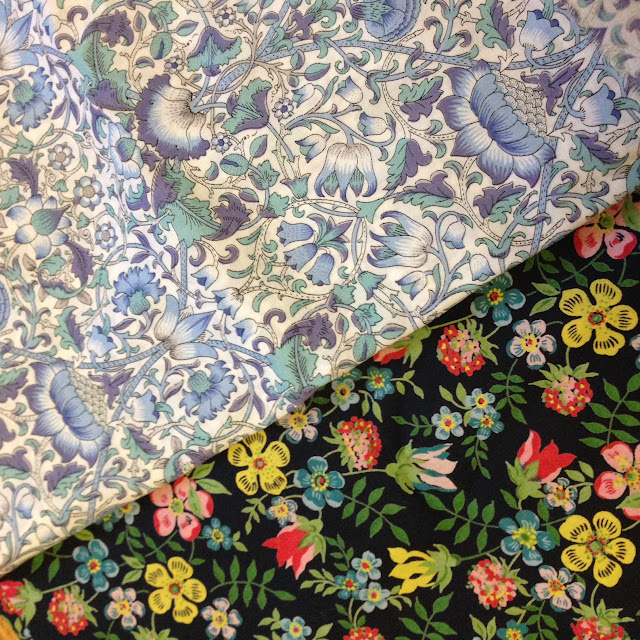 My mind's eye sees a bit like this: Liberty tank + cardi in a related color + cropped jeans + clog sandals = summer is sorted.

So I've been working on making muslins of three different tank patterns. First up is the Wiksten tank. 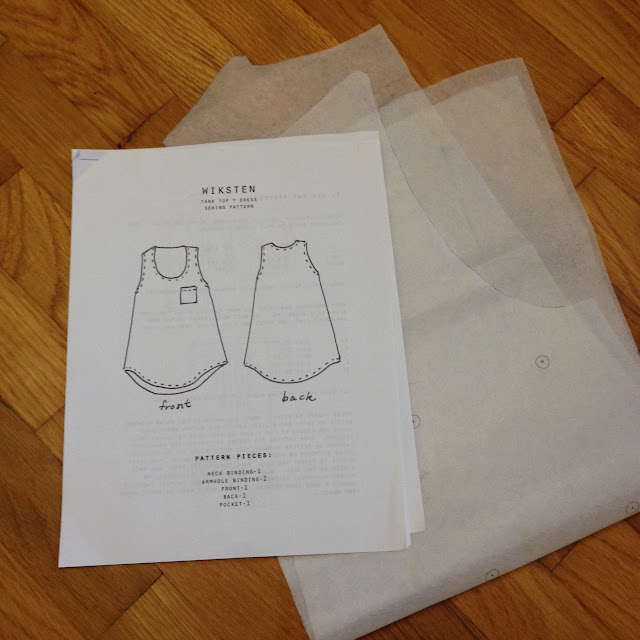 (Why not just buy one pattern and tweak it if necessary until I like the result? Well, I've been curious about whether and how the cut, proportions, and fit of a garment might vary across patterns, even for a very basic thing like a tank top. And I wanted to develop a better understanding of the details of how a flat pattern translates into a shape on the body. In other words, because science.)

The Wiksten tank is very popular, and deservedly so -- there are a lot of great-looking versions out there. But looking at my muslin I can see why people say that "simple isn't easy." From the front the top looks blocky, and from the side it looks tent-y. The Wiksten tank doesn't have bust darts -- I'm pretty flat-chested so that shouldn't "matter," but I think the result just flattens me out more. 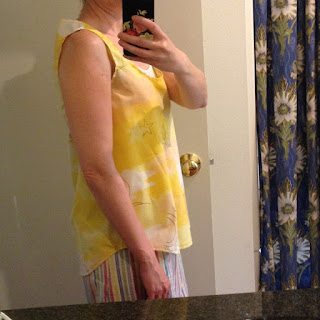 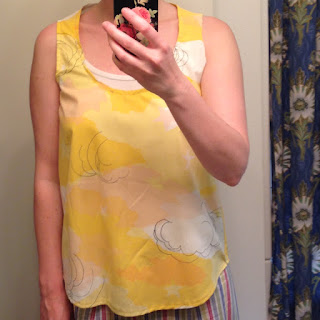 I realize that part of the issue here is fabric choice: I'm using an old bedsheet for my muslins, and I could have predicted that a crisp cotton-poly poplin would be exactly the wrong thing for this pattern. If I were to make this tank "for reals," I'd only use a VERY drapey silk or maybe a rayon challis. But really my conclusion is that while I don't need bust darts to accommodate my shape, I do need them to keep my shape from getting totally lost.

I'm a bit more befuddled by the fit at the shoulders. See the way the back neckline rises up away from my body? The general shoulder/underarm region feels pretty tight, too (this isn't much of a surprise, I have broad shoulders and a wide ribcage, and often find ready-to-wear shirts difficult to fit in this area -- though sleeveless tops usually aren't as challenging). 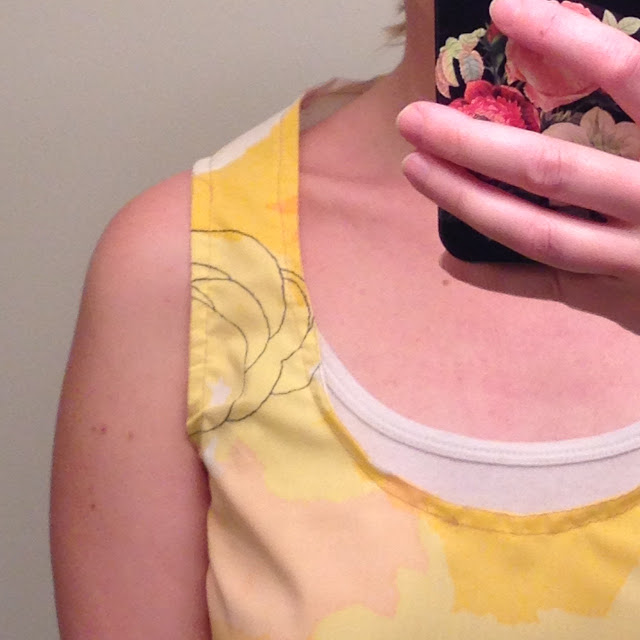 Let's back up for a minute. So the armholes and neck of the Wiksten tank are finished with bias binding. But I didn't want to fuss with all that for a muslin -- I didn't need a finished garment, I just needed to be able to gauge fit and proportion. So I decided to just turn under the neckline and armhole edges (by prescribed seam allowance plus a smidgen more to account for the turn-of-cloth) and baste them down.

The first time I did this I ended up with a pretty wavy, puckery finish at the neckline and armholes. I remembered seeing a tutorial on the Coletterie for sewing a curved hem so I decided to try that. (Yes, I ripped out the stitching and did it again -- on a muslin that I "didn't want to fuss with." But at this point I was curious, because remember, SCIENCE.) 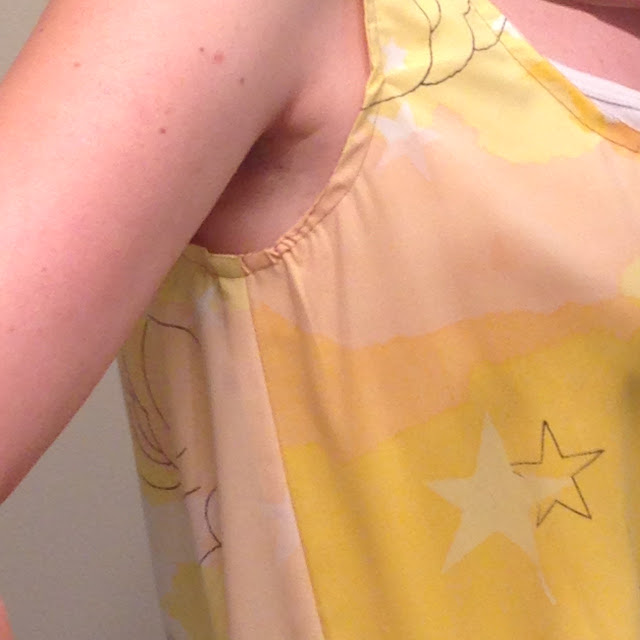 This version was even jankier than the last! Also, the fabric did not want to behave, to the point that multiple f-bombs had to be dropped in order to get through sewing the neckline and just one of the armholes.

Of course. The curved hem method is for convex curves, like you would find on the hem of a circle skirt. Not for tight concave curves, as exist at armscyes and necklines. What I should have done was clip the curves and then turn the fabric under. (Like this, of course.) I mean, I know about clipping curves, I have sewn curved seams before, see: 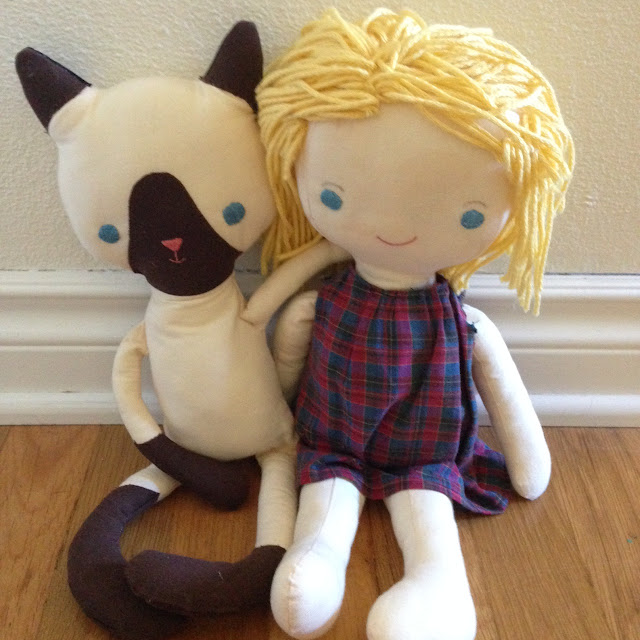 Funny that I failed to transfer this knowledge from craft sewing to garment sewing. Well, I've learned now is all I can say.

Anyway, I couldn't face finishing the second armhole so I just cut off the seam allowance instead. And look, the right side of the tank sits much better than the left.

So what's going on with that left shoulder area?
(a) It's the janky armhole finish that's causing the problem.
(b) I need to add width across the shoulders/upper back.
(c) I need to lower the armhole.
(d) Combination of (b) and (c).
(e) ???

I'm curious whether any garment sewists out there can tell me what might be going on. I admit that this is a question of mostly academic interest at this point -- I've moved on to sewing up a muslin of a different pattern that looks like it is going to be a better match for me -- but like I said, I'd love to understand this stuff better.

*Why do I think this time will be any different? Time will tell, of course, but I have hit on one new strategy that seems to be helping: instead of waiting for a time when I have a couple hours to sew up a whole garment, I'm applying the "sewalong" approach and just trying to sew one or two seams each day. For something simple like a tank top, this means that I can finish an item in about a week, rather than waiting until forever to even start it.
Posted by Sarah at 6:41 PM