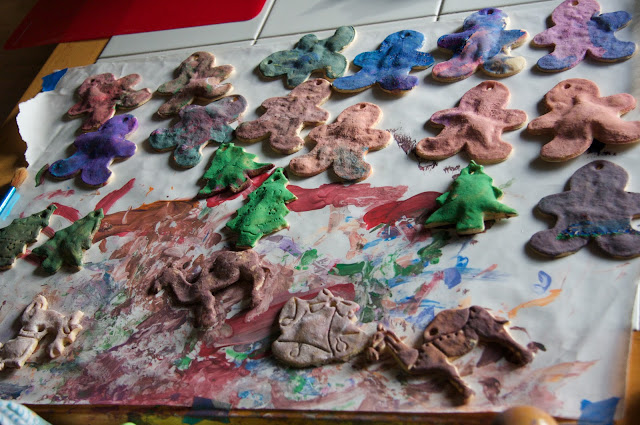 Here's what we worked on last weekend--a batch of salt dough ornaments. I had this idea to use them as gift tags on packages to some of our family members.

And then my daughter got so into stamping out gingerbread men that I thought she could give them out to her classmates at preschool. (Hopefully their parents will realize that it's the thought that counts and that it's okay to dispense with the actual physical object...)

There are tons of recipes for salt dough all over the Internets, and they're all basically the same. We used:

(It's easy to make a bigger or smaller batch, just keep the same proportions.)

Stir the salt into the water (the idea is to dissolve it but in my experience it doesn't really dissolve completely). Add the flour and stir/knead to make a smooth dough.

Roll out, cut into shapes, and place on an ungreased cookie sheet. Bake at 250 F for 2.5 hours. Paint/decorate when completely dry. 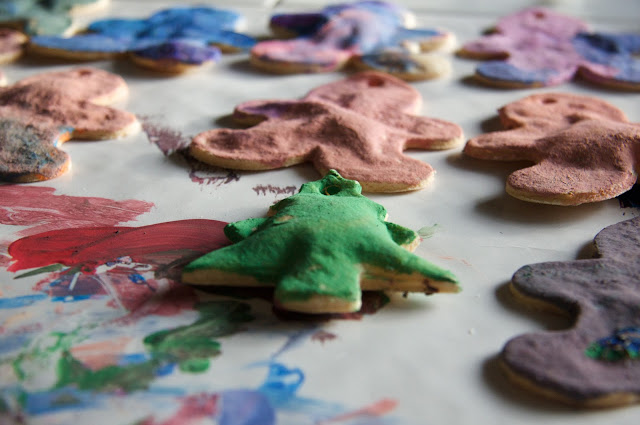 Salt dough ornaments aren't something that I recall making as a kid, and my rookie status shows here. Our ornaments puffed up in the oven--I'm guessing we overworked the dough a bit, but that might be inevitable with a three-year-old assistant...we did a lot of starting over when shapes didn't get entirely on the dough, overlapped with each other, etc.

Nor have I found a perfect solution for decorating the ornaments. We used this washable kid's paint, and some of the colors did fine but others cracked badly. I've read that you're supposed to paint salt dough with acrylic paint, but acrylic paint isn't washable, and I'm just...not going there. And I have a feeling any water-based paint would crack like this (though I wonder if I would get better results with table salt rather than coarser Kosher salt?). Oh well.

(Oooh, and as I'm typing another idea occurs to me...maybe markers would work better than paint. Hmmm...) 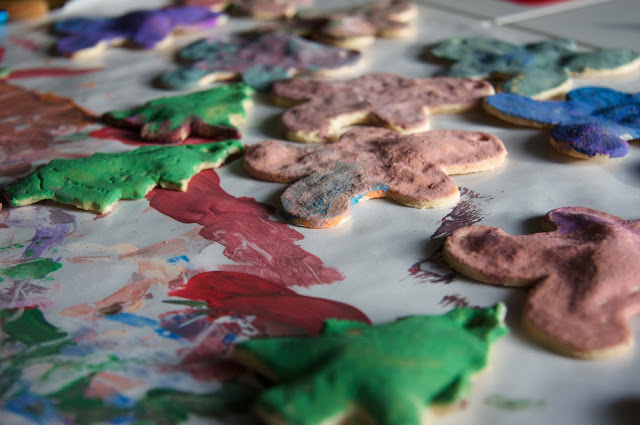 I couldn't believe my daughter stuck with the project and painted all the ornaments in one sitting. After she finished the gingerbread men and was about to move on to the Christmas trees, she needed more paint, and we had a little altercation about what colors to put on her palette--I'd already squeezed some green on there, and then she decided she didn't want green. I tried to talk her into it by pointing out that she was about to paint Christmas trees, and trees are green, so really green was an ideal color to have available.

And I had two simultaneous thoughts: 1) Hmm, maybe I should have said something sooner, and she would have made gingerbread men that other people would actually recognize as such; and 2) Oh crap, I just killed her childhood.

Anyway, humble and imperfect as this project turned out I kind of like that she did it pretty much herself. I think maybe we'll start a tradition of making ornaments each year--I know a couple of grandparents at least who will genuinely appreciate it.
Posted by Sarah at 8:14 PM