It's the end of March, and time to join with In Residence and Just Jacq for the final linkup in their winter capsule wardrobe series. Full disclosure: I switched over to my spring wardrobe a couple weeks ago -- more on that later, but for now, here's a recap of how things went this winter.

Above are collages of some of my most-worn and least-worn items from my winter capsule. What I'm really interested in, though, are not the outliers but the averages. There's this idea floating around out there that women wear 20 percent of their clothes 80 percent of the time. I'm not sure there's much rigor behind this statement, but I'd bet the general idea rings true for many of us.

I hoped that one of the benefits of a capsule wardrobe approach might be to help me wear my clothes more evenly, both by spurring me to remove the clothes I don't really want to wear from my wardrobe, and by providing a smaller number of clothes that are easier to mentally keep track of and keep in regular rotation.

Of course, just robotically rotating through my wardrobe from one shirt to the next wouldn't be much fun, but I would like to feel like the majority of my clothes are really pulling their weight by, you know, actually clothing my body, rather than just sitting in my closet.

And the capsule approach worked pretty well, I'd say. For example, I wore most of my pants 5 to 7 times each. Skirts and dresses generally got 3 or 4 wears each, and I wore most of my tops and sweaters between 3 and 6 times each. What I don't see is a big split between a lot of items worn once or twice and a few items worn a ton, and I'm happy about that.

How my capsule evolved


As I mentioned at the outset of this experiment, I structured my capsule wardrobe challenge a bit differently from the norm. Instead of shopping to finalize my capsule before the season started, I opted to begin with what was already in my closet -- gathering together all of the items I owned that were appropriate for the weather and fit my color palette -- then added and subtracted items over the course of the challenge.

This strategy worked really well for me. Actually wearing my capsule for a while gave me a sense of how to edit it (in both directions) that I wouldn't have had up front. I'm really interested in what this experiment can teach me about the structure of a well functioning wardrobe, and I think keeping that question at the forefront helped me avoid mindless shopping.

I added a pair of medium-wash bootcut jeans, two layering sweaters (gray and ivory) that replaced similar items I had passed along, a light blue cardigan, and a pair of long-sought black ankle boots (on that last item, see below).

I won't go through the items I got rid of in detail here (you can read back to previous posts if you're curious) but I did notice a couple of patterns: I passed along several layering sweaters because I didn't like the cut, a couple of short sleeve sweaters/vests that didn't add much to my wardrobe, and all but one of my pullover sweaters. Team cardigan!

Speaking of adding and subtracting... 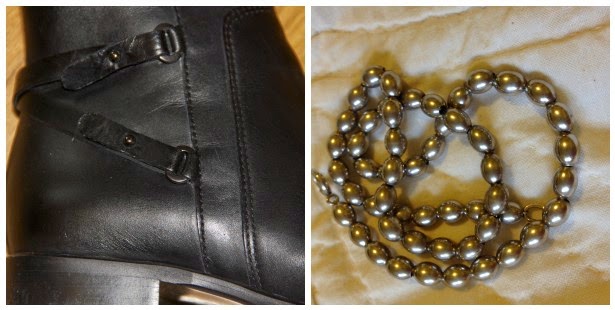 Black ankle boots: La Canadienne via Ebay. I've wanted a pair of black ankle boots for the last two winters but couldn't find exactly the look I had in mind from a brand I trust at a price I was willing to pay. So I was very happy when my patience was rewarded and these turned up! I'm looking forward to wearing them in spring, too.

Silver bead necklace: belonged to my husband's grandmother. My mother-in-law was in town a couple of weeks ago and brought some of her mother's jewelry for us to look through. I'm not sure I would have gone hunting for a piece like this on my own, but I like the nice touch of polish it adds to dressier outfits (my other silver necklaces have a more casual feel).

1. Kali at the blog The Nife en l'Air has written about the importance of noticing the details of our favorite items of clothing, as these details can be the difference between a new purchase that becomes an immediate favorite, and an "almost-right" one that languishes in the closet.

My winter capsule wardrobe definitely helped in that regard. For example it's clear now that I DO NOT LIKE crewneck tops, but I love scoop necks. And I've worked out that I love cardigans, but not plain ones: they should have interesting details like a cable-knit or other texture, a shawl collar, pockets, or even all three. Figuring this out has helped me avoid several less-than-ideal purchases.


2. As I mentioned above, what I really hoped to learn from this challenge was something about the structure of a well functioning wardrobe, and I think I've gained some insights there too. Many capsule wardrobe formulas advise having roughly twice as many tops as bottoms, plus a few "third pieces" or "toppers" (blazers, cardigans, sweaters) for variety. I have never been able to get these formulas to work for me, primarily because I wear a "third piece" (usually a cardi, of course!) almost every day.

This winter I noticed that I don't mind wearing the same relatively basic tops over and over, but I like more of a sense of variety from my outer layer. I think this means that my seasonal wardrobes will have roughly equal numbers of tops, bottoms, and sweaters. And my capsules will probably be bigger than those of many folks, primarily because of those extra sweaters. That's okay with me; again, my goal is functionality for me, not minimalism per se.

3. The other question about wardrobe structure is the balance between neutrals and colors. Many capsule wardrobe-ers use a mostly neutral palette with a few "pops of color" here and there, but again I march to the beat of a different -- more colorful -- drummer. And there's not much advice out there about how to build a more colorful capsule wardrobe.

My experience suggests that just because you like to wear a lot of color, doesn't mean you need All The Things in All The Colors. That's reassuring, isn't it? What I noticed was that the categories of my wardrobe that functioned the best contained at least one example of each of the following (and a pretty good balance of them overall): darker neutral - lighter neutral - darker color - lighter color.

Let's consider this a rule of thumb, a provisional theory for now -- I'm looking forward to testing out how it works with my spring capsule.