On Exuberance and a Purpose for Every Place 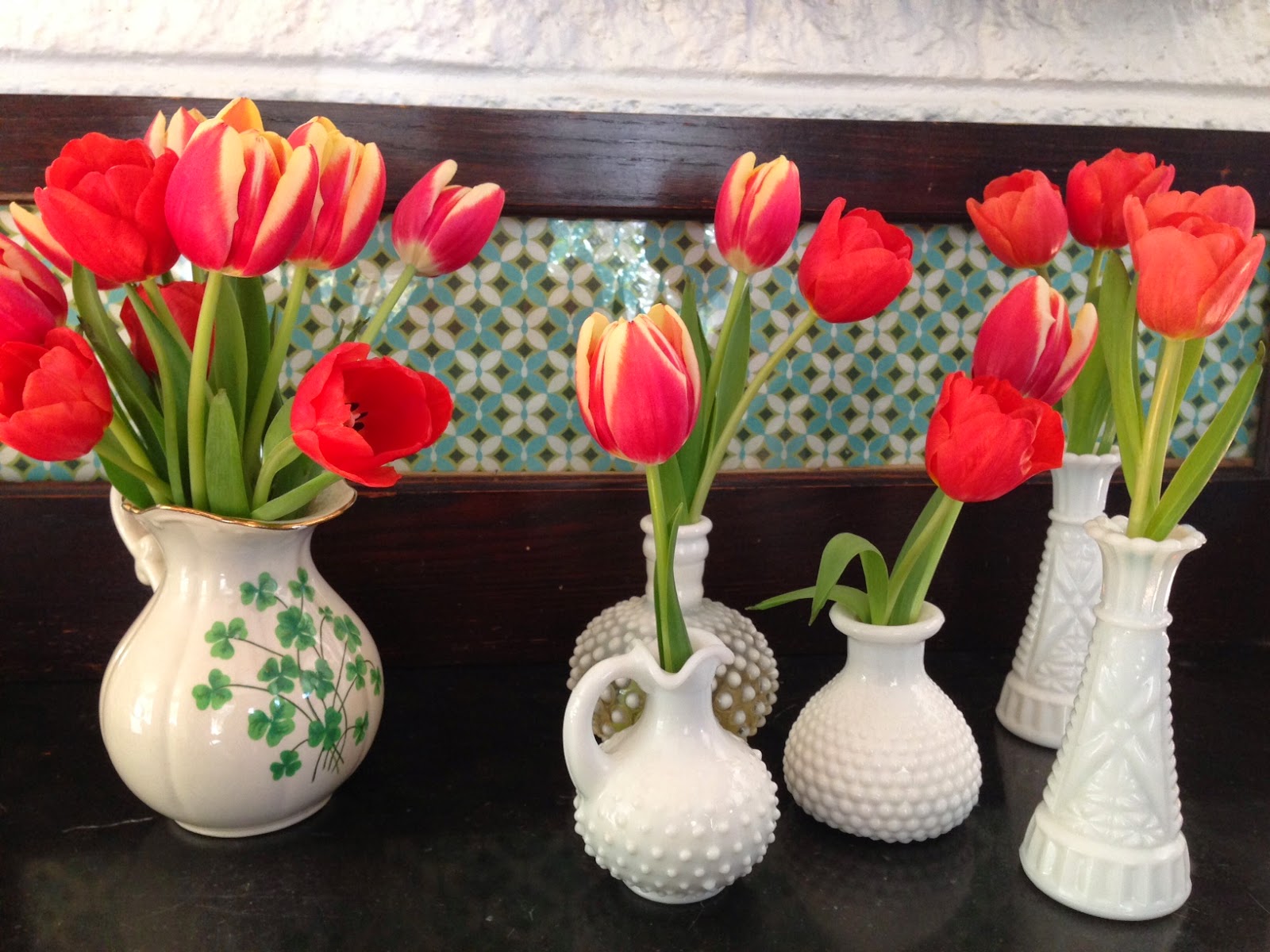 The writer, Katy Orme, has a winningly down-to-earth voice. And she certainly has mastered the decorating style I aspire to. (Which, after poring over photos of her apartment, I can now label as Scandinavian white minus the austere modernism, crossed with English car boot sale minus the cluttery kitsch. Halfway between London and Copenhagen, if you will -- hey come to think of it, that's Amsterdam.)

Katy also co-hosts (along with Charlotte of Lotts and Lots) "Styling the Seasons," a monthly invitation to "style any surface in your home to represent the change of month and what it means to you." This month I thought I would join in. 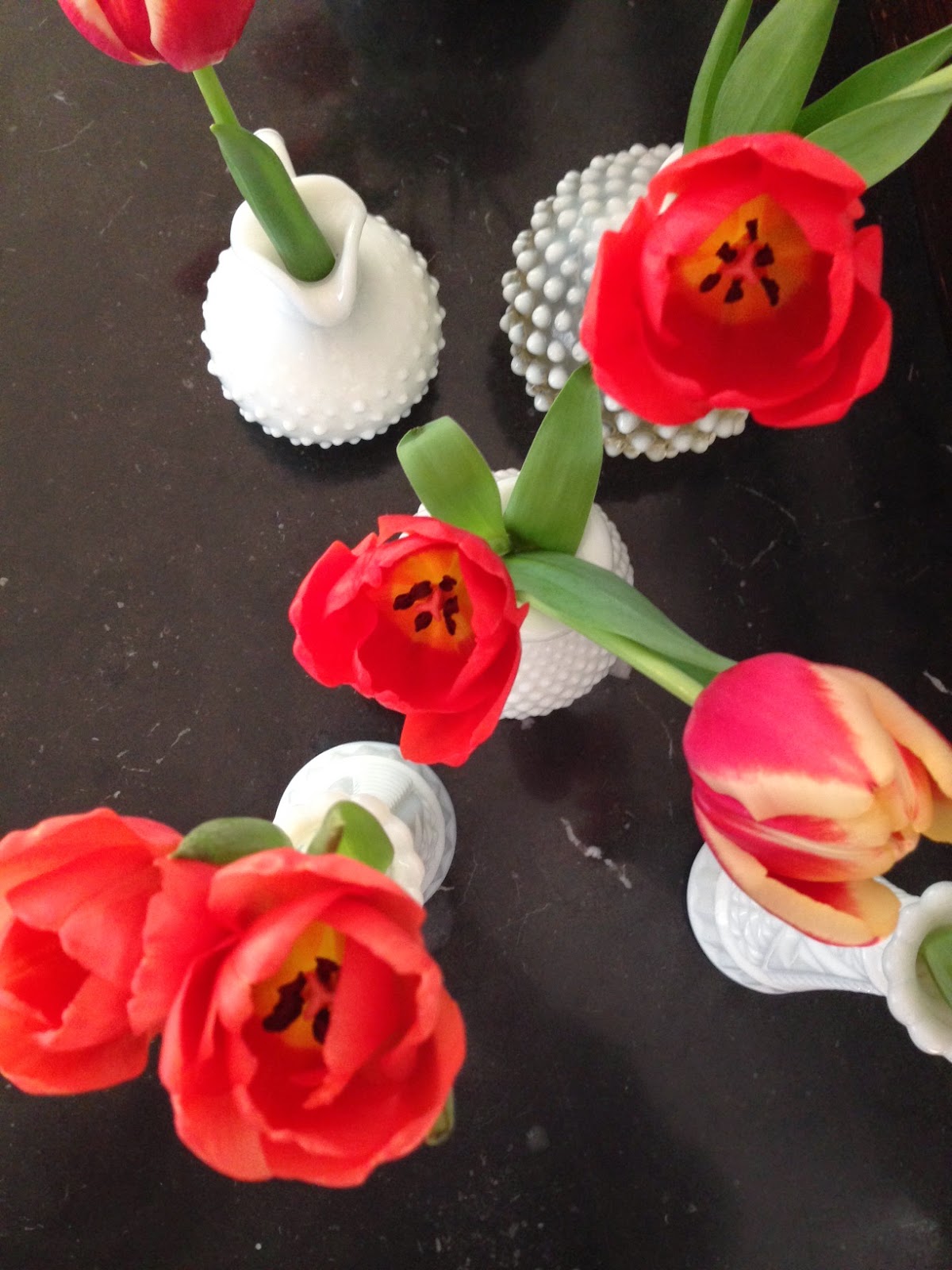 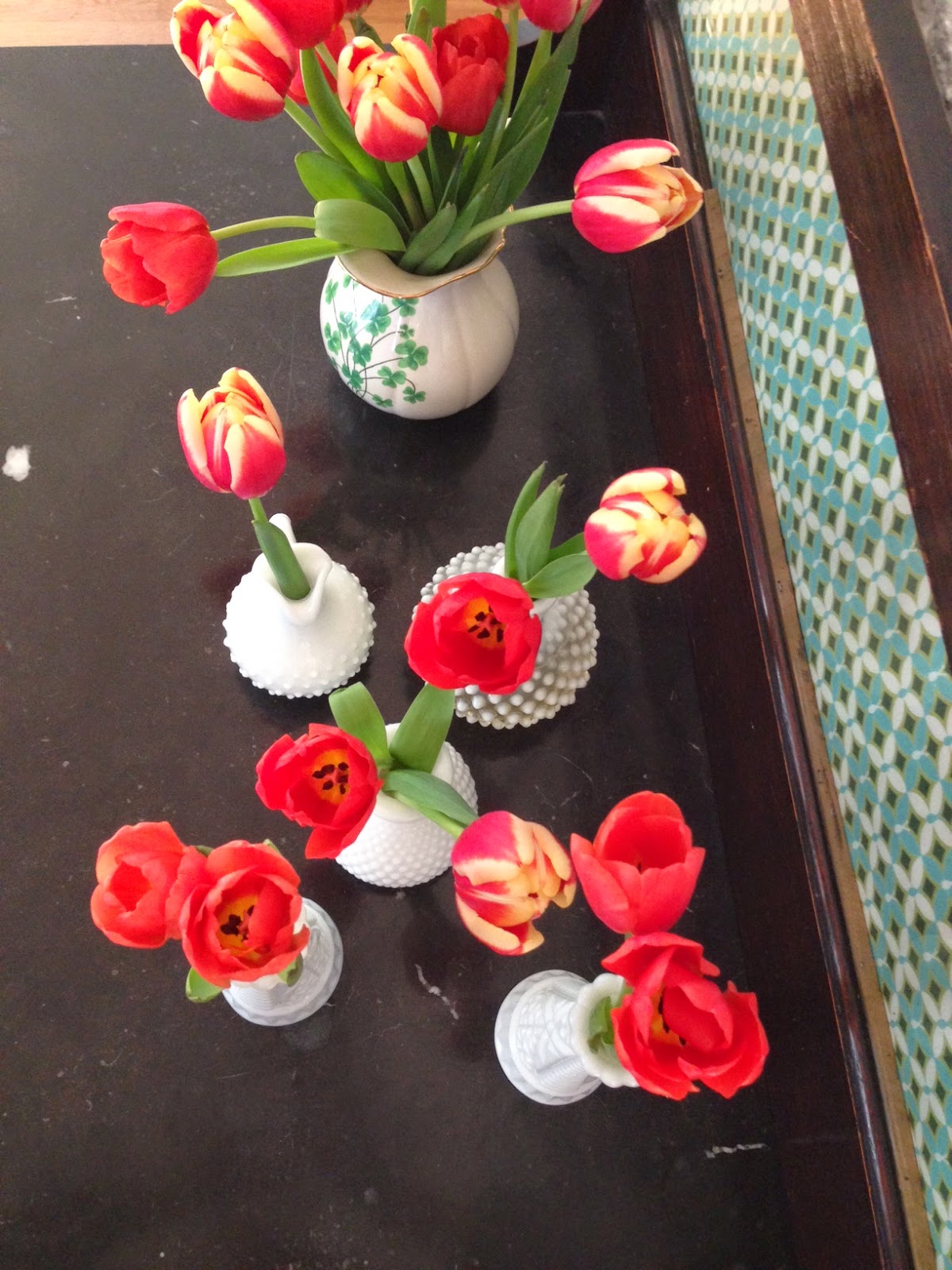 I've expressed some skepticism about the concept of "styling" in the past so I suppose I should explain myself. (First Instagram and now styling? What's going on here, has the world or at least Sarah gone mad? Don't worry -- I remain morally opposed to Twitter.)

I suppose what I'm not so keen on is styling for its own sake -- form without function or even form that interferes with function (that's a nice looking arrangement of objects on that bedside table, but where am I supposed to put my glass of water?).

But switching things up around the house to follow the changing seasons? I can get behind that. And the idea that the objects in our homes should reflect our hopes and intentions? Oh yes, count me in. (Meaning is function, in my world.)

I decided to work with a marble-topped sideboard that was given to me by my aunt. It's moved around a bit in the house but at the moment it resides on one side of our dining "nook." Since it's right near the dining table (meaning, about a foot and a half from the dining table, which is on the other side of the nook, which should give you some idea about the scale involved and why I can't call it anything other than a nook, cutesy as that may seem), the sideboard tends to become a dumping ground for items hurriedly cleared off the table before dinner-time.

Recently I had made a conscious decision not to "decorate" some of the surfaces in our house but instead to try to leave them clean and empty. Yet what I am noticing is that surfaces left completely blank tend to attract clutter. It's almost as if, when a surface doesn't have a specific purpose of its own, it is doomed to become a catchall. In my head I'm revising the oft-quoted "A place for everything and everything in its place" to read "A place for everything and a purpose for every place."

I can see now that's part of what's going on with the sideboard. We put it in this spot because that's where it fits, not to serve a particular purpose. No wonder it's become a clutter magnet.

So the first step was to clean up and take things back to a blank slate. Then I added tulips! I also hung a print of birch trees that I bought my husband for his birthday several years ago. (You guys, I am so good at buying prints by independent artists off Etsy and the like...and so bad at actually hanging them on the walls.) By happy accident, the yellow in the tulips matches the yellow in the birch forest print. 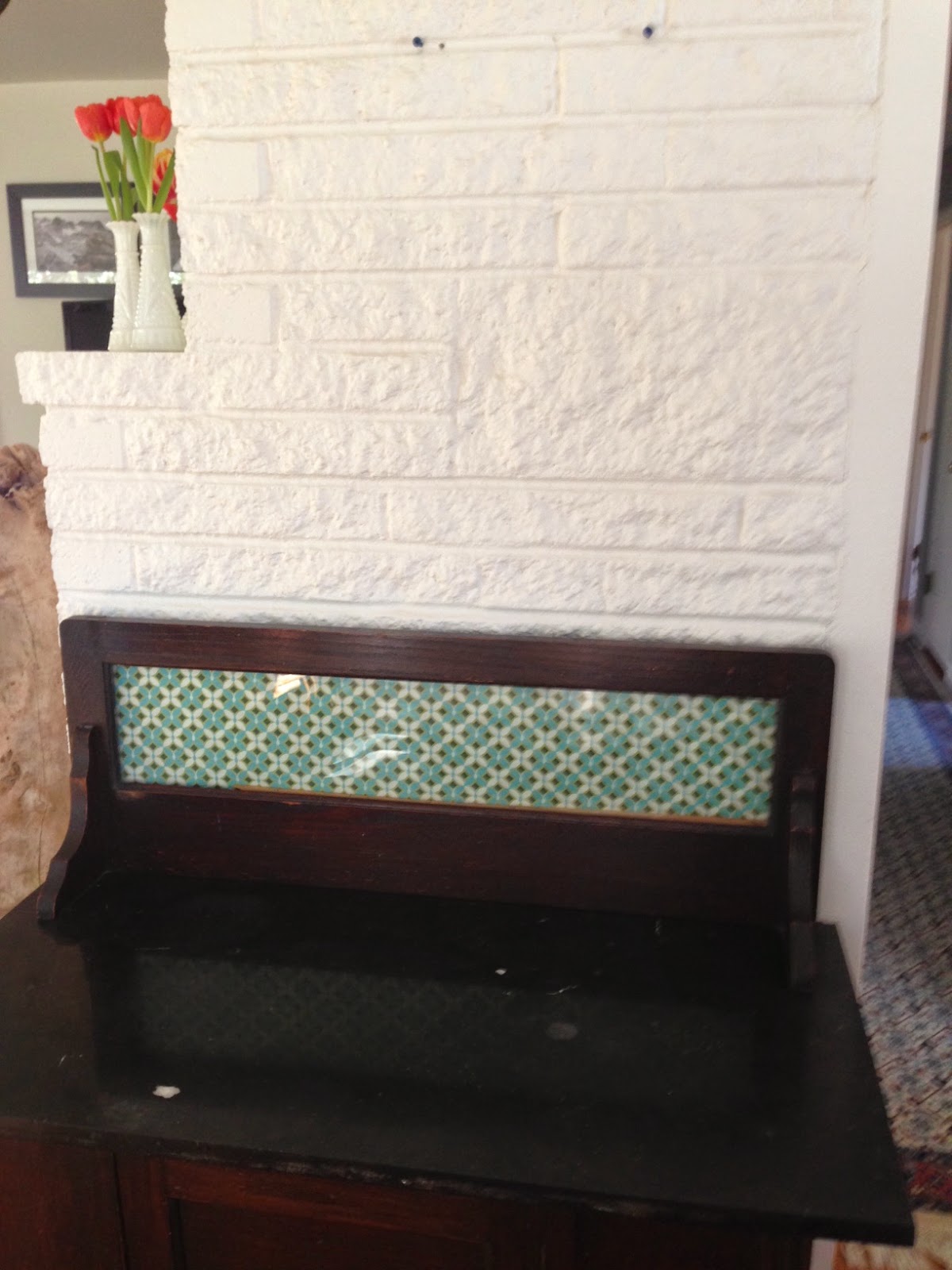 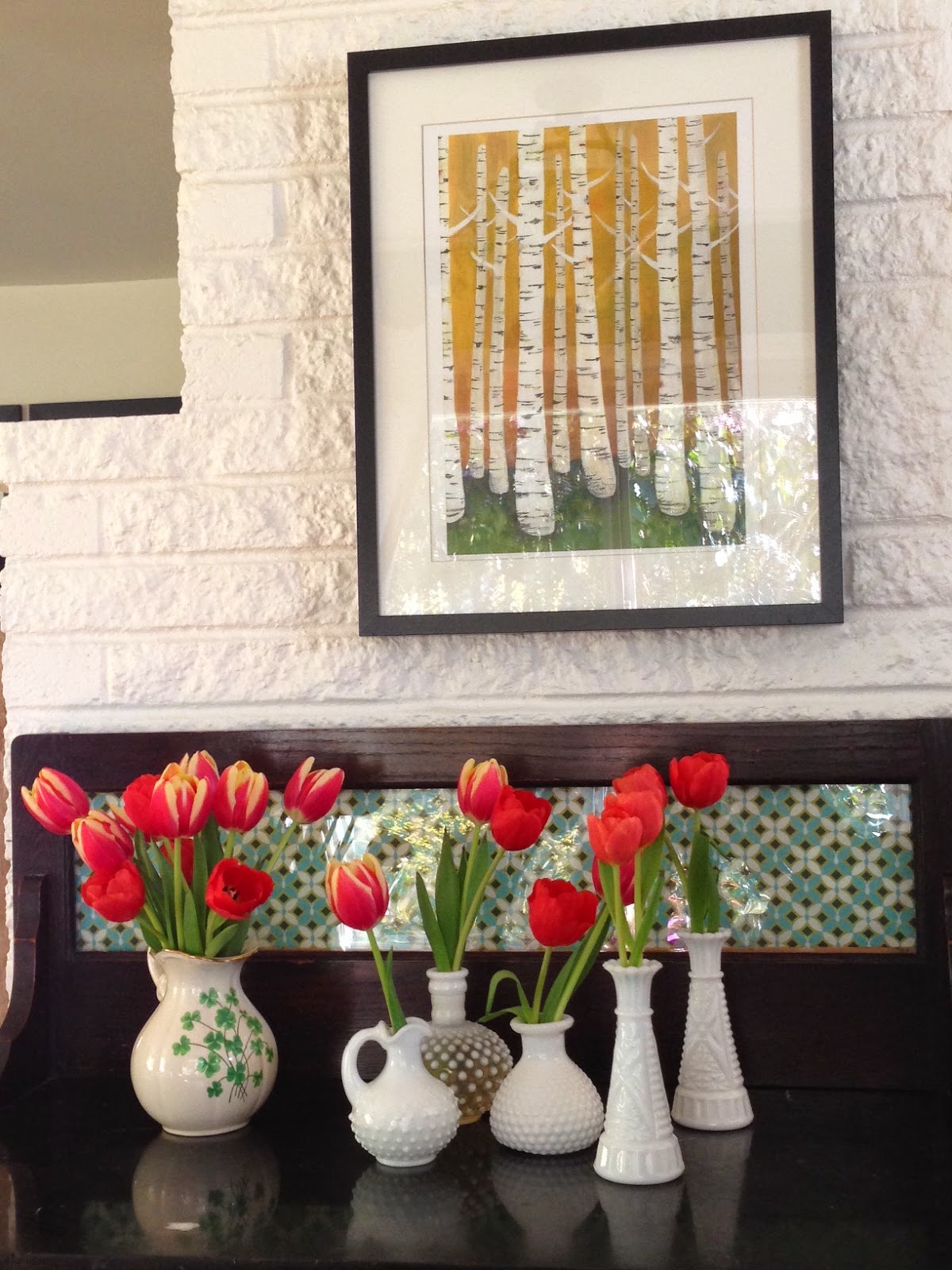 So for this week at least, the sideboard's purpose is to hold something beautiful. An indulgent purpose, but it counts for now. And I have resisted piling crap on that sideboard for a full four days -- success!

As for what this month means to me? You have probably guessed from my posting schedule of late, but February was quite a slog around these parts. From March, I'm hoping for a little exuberance. So, not one bunch of tulips but two; not one vase but half a dozen.

Exuberance justifies a liberal hand with the photos, don't you think? Here we go.... 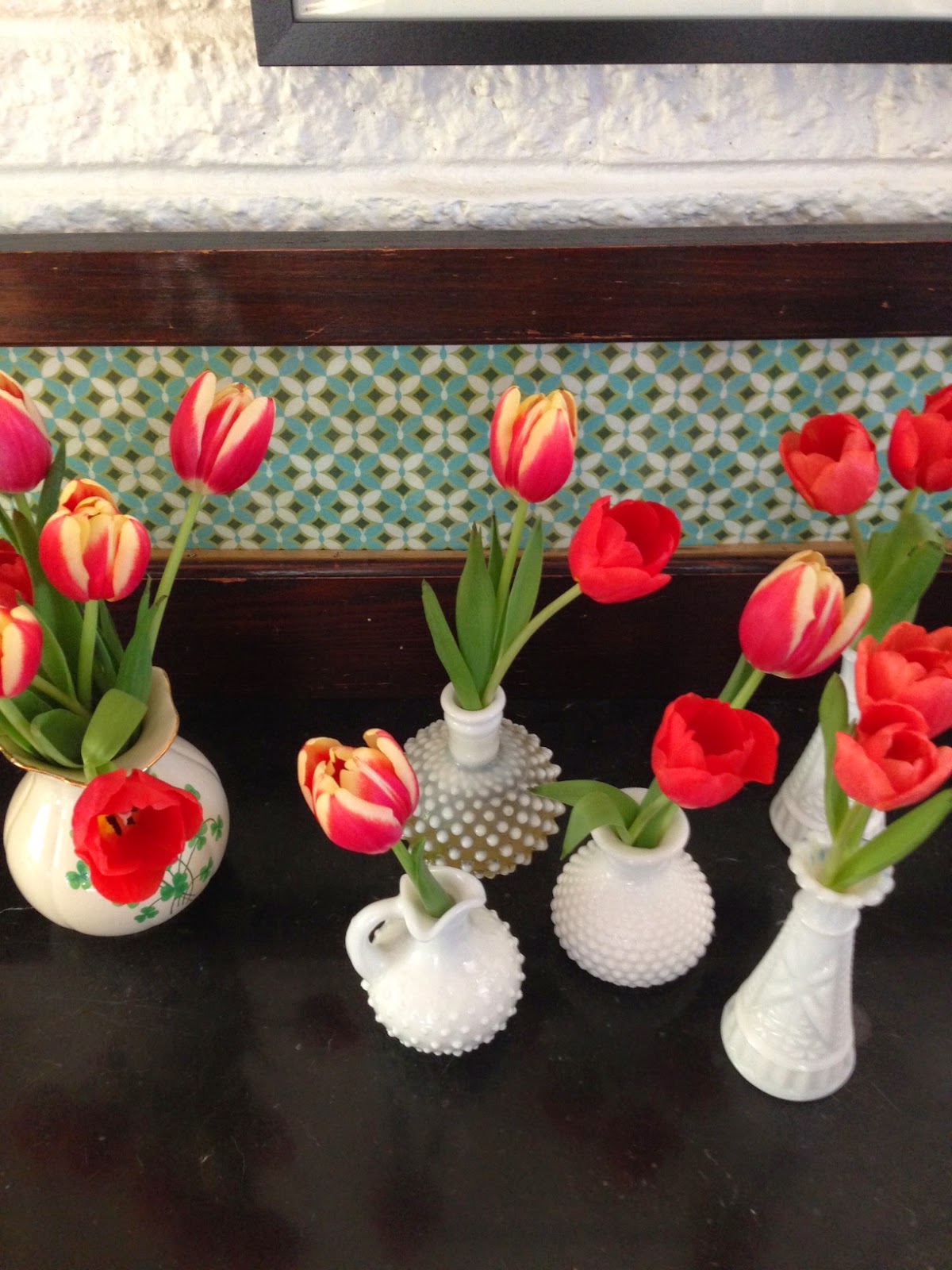 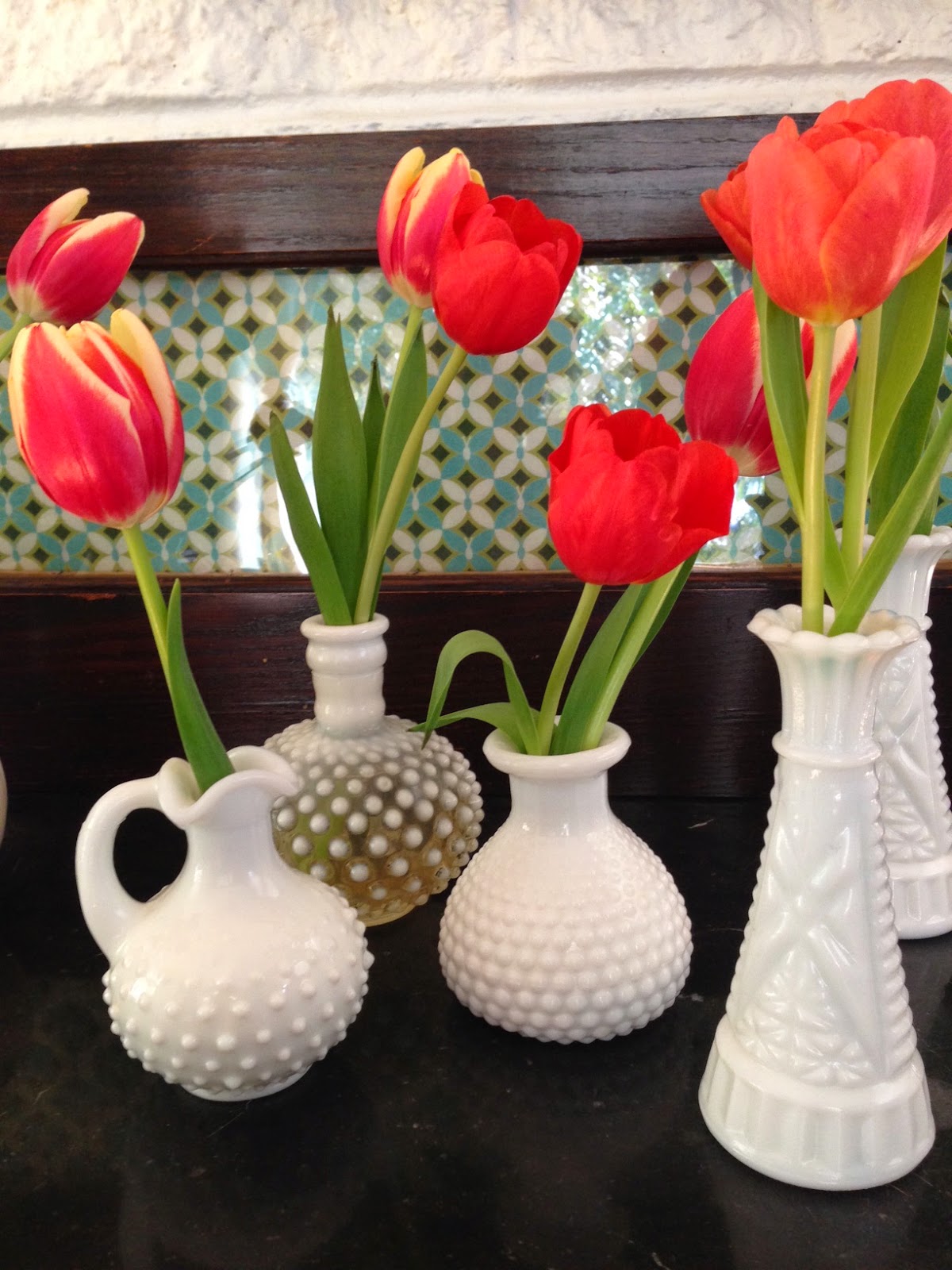 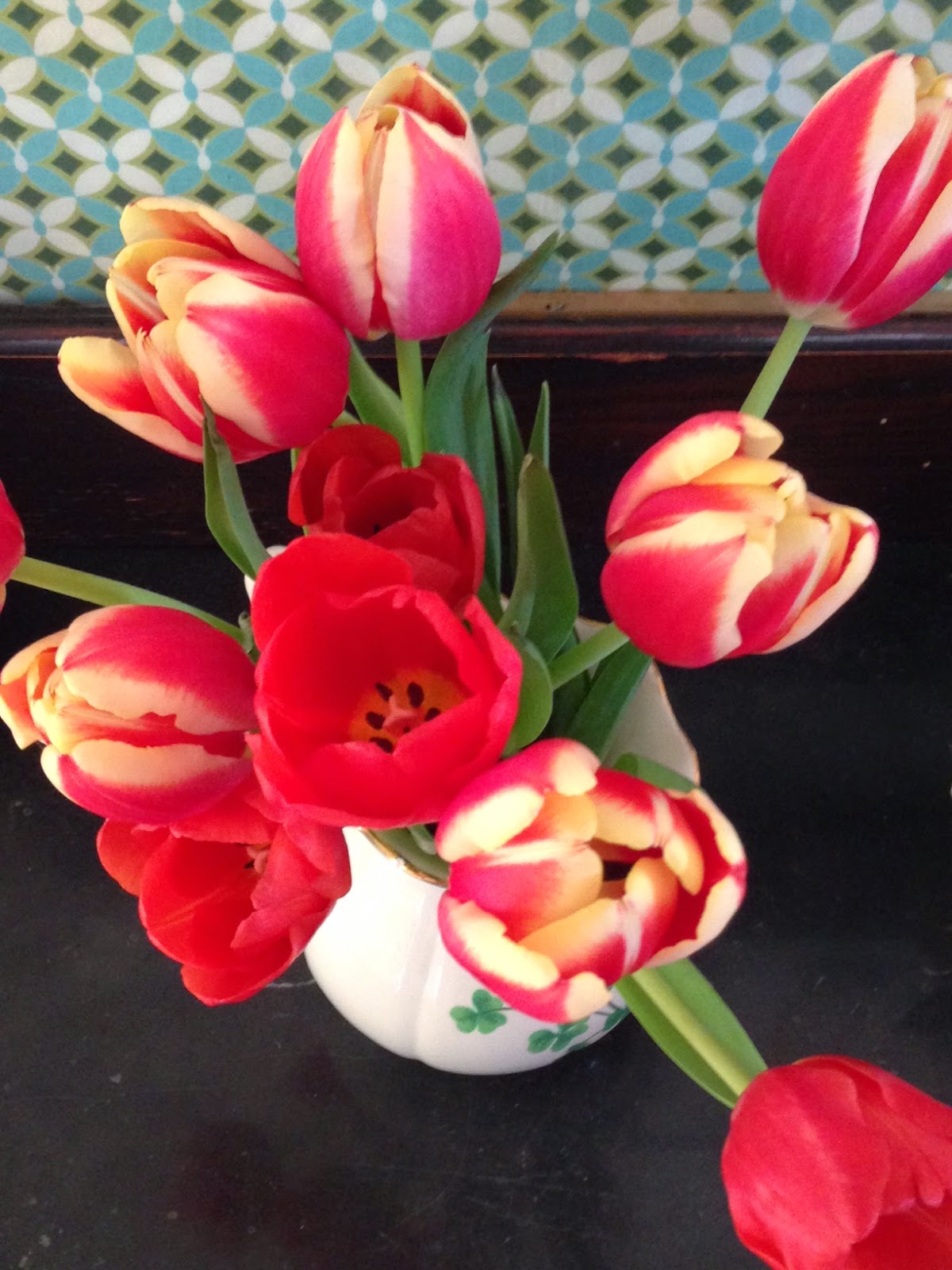 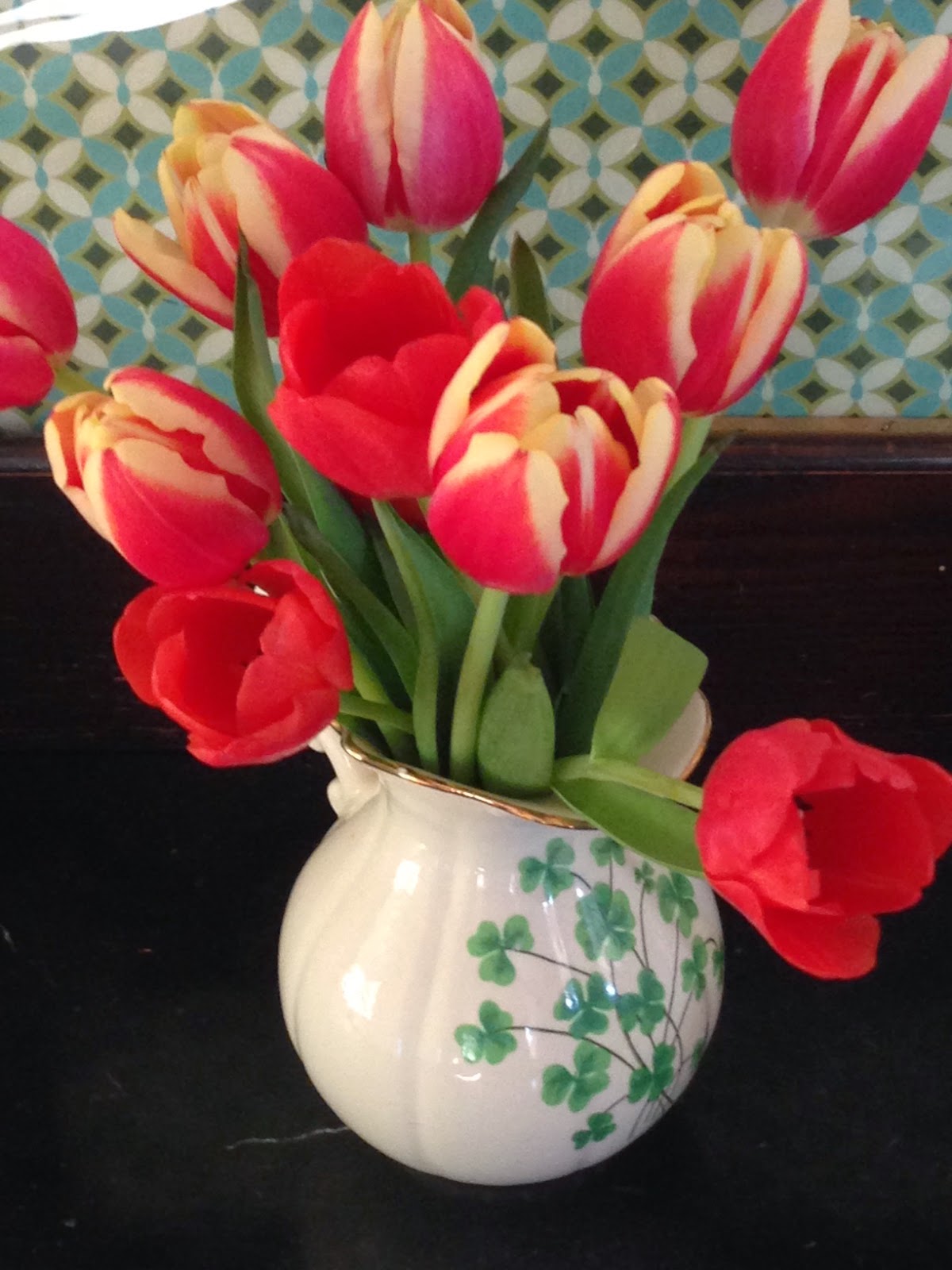 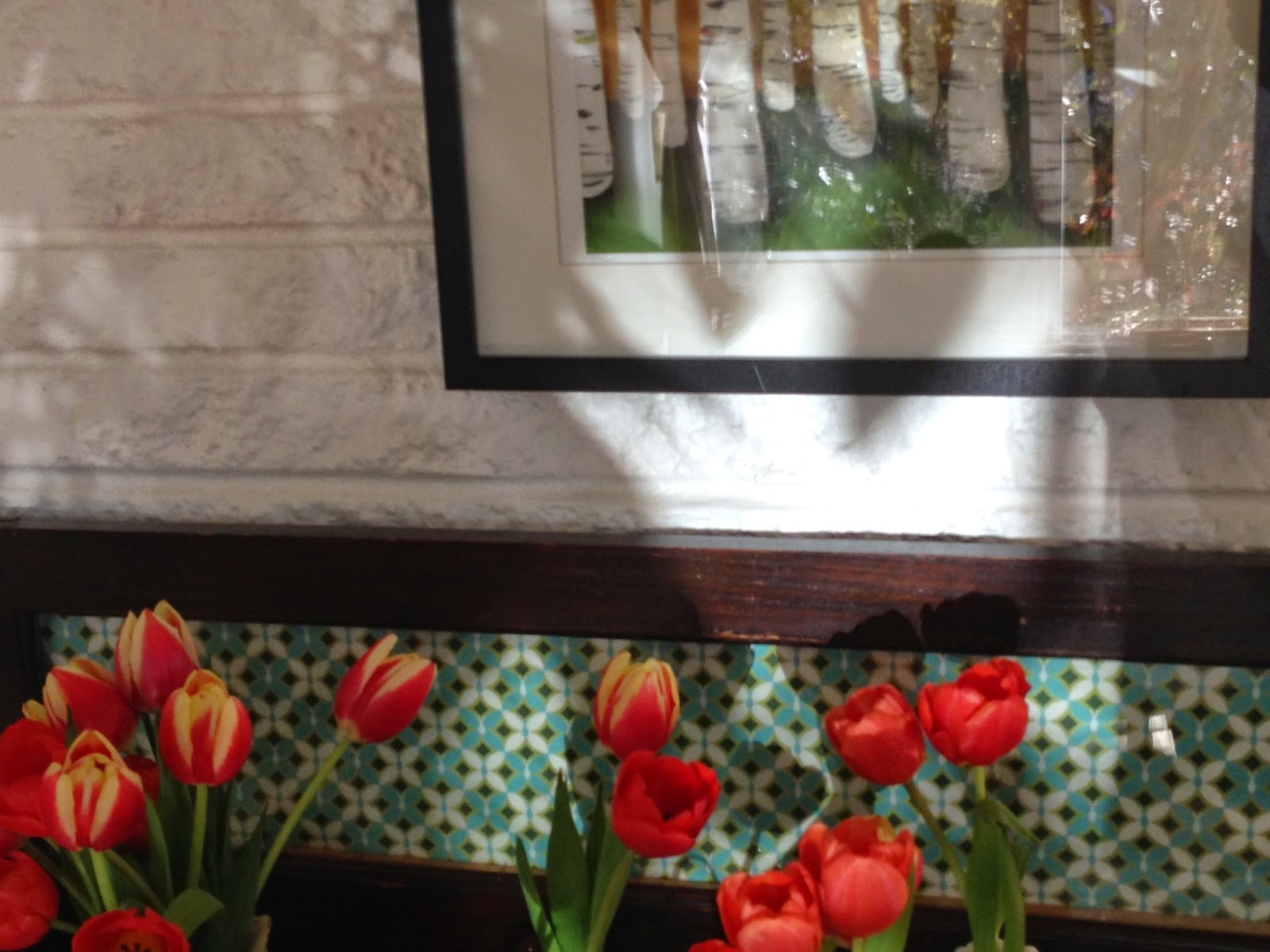