The new bedroom so far

It's about time I shared some actual progress shots of our room-swapping endeavor rather than just teasing you with plans and schemes, don't you think?

So here's where things stand today. 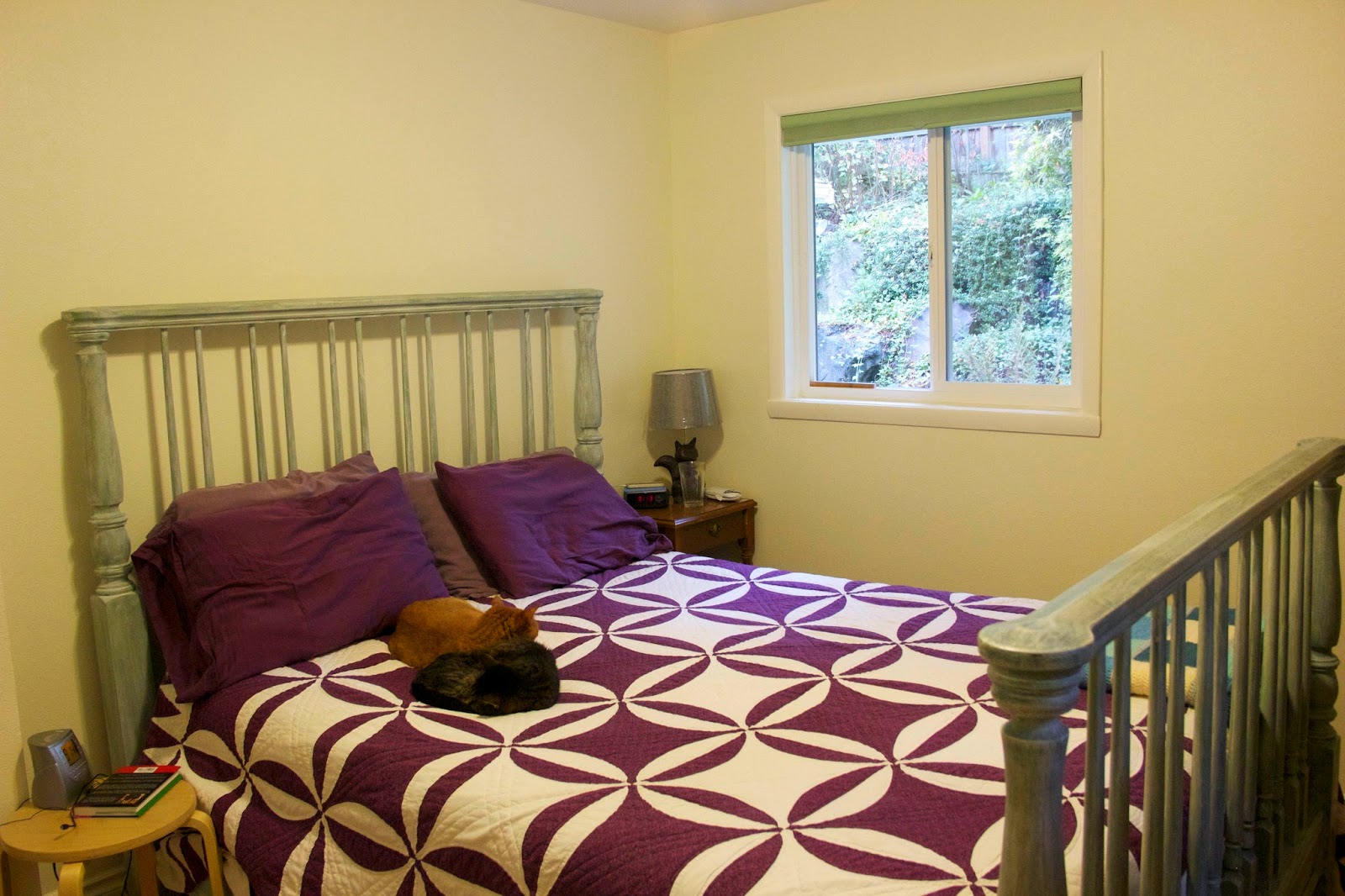 Let me say first that I LOVE our new room arrangement. The room just feels really right and sleeping in here is so cozy.

Cozy is often just a polite way of acknowledging tight quarters, of course. 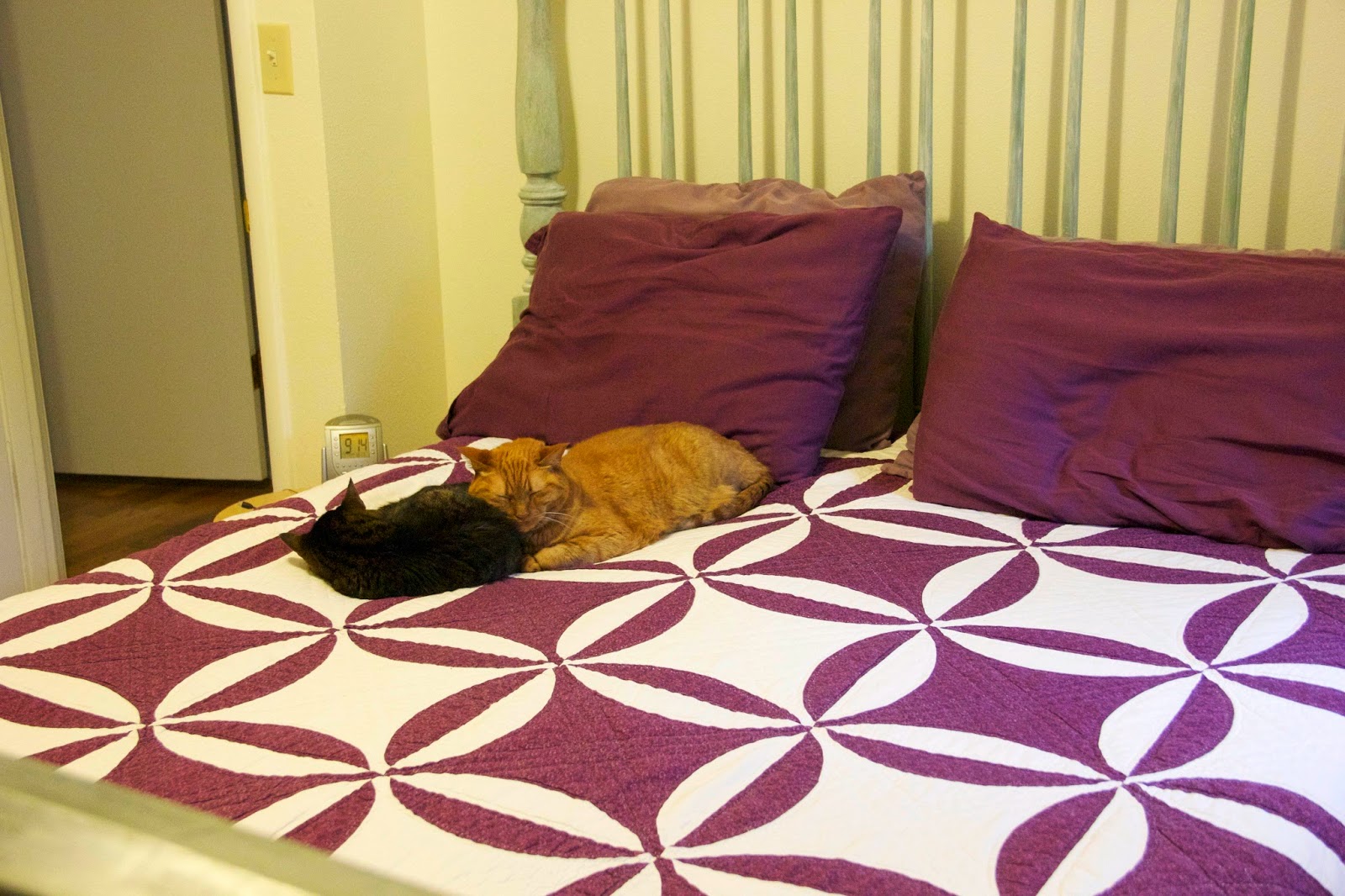 It's true that our queen-size bed takes up most of the floor space in the room. (Though, certain members of the household don't seem to mind that at all.)

But as it happens, the amount of clearance at the foot of the bed and on the far side of the bed isn't any less than it was in our old bedroom. Believe it or not. 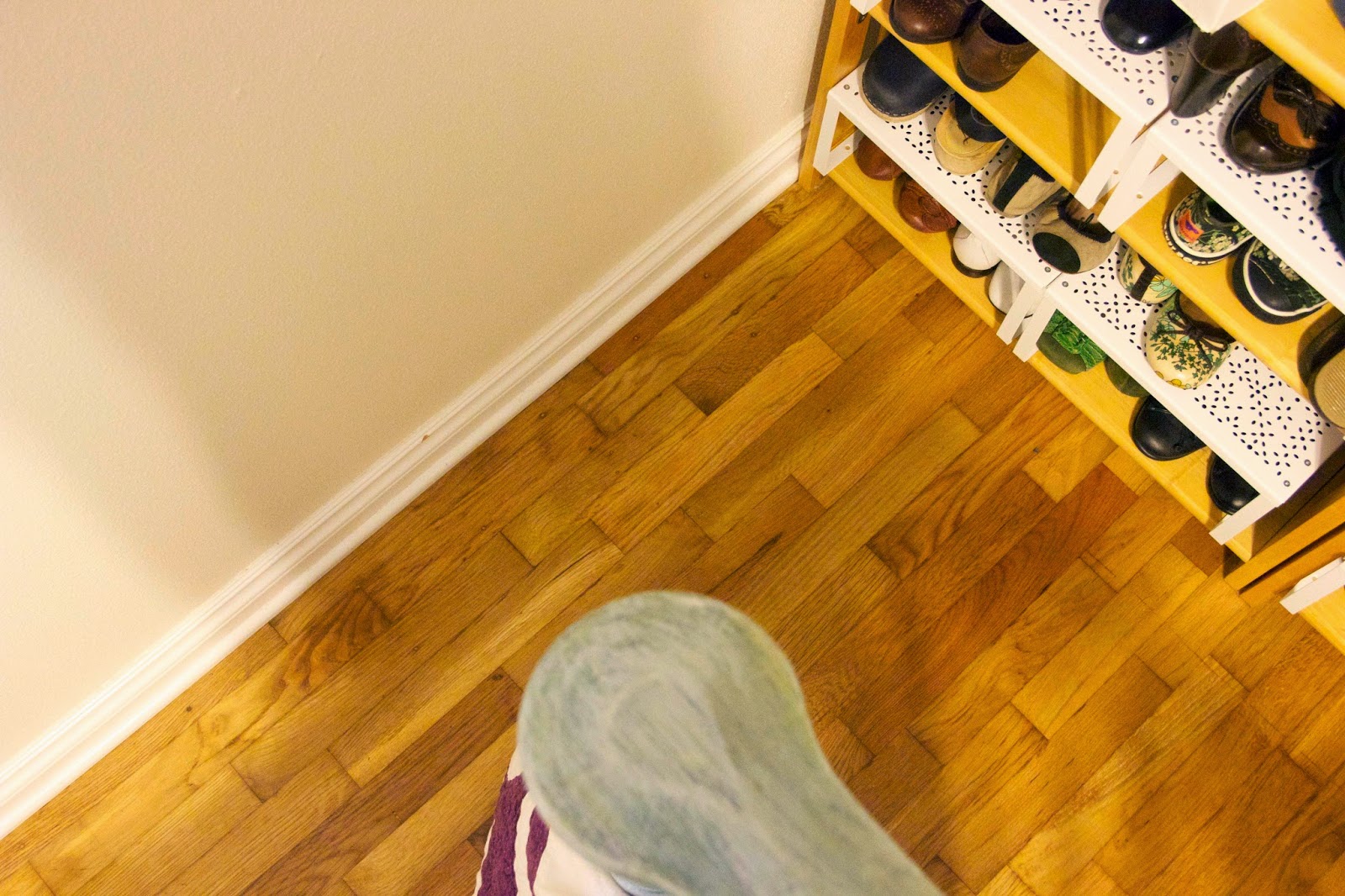 The shelves along the North wall of the room are the same ones, in the same configuration, that were in the old office. Now they serve as clothing and shoe storage. 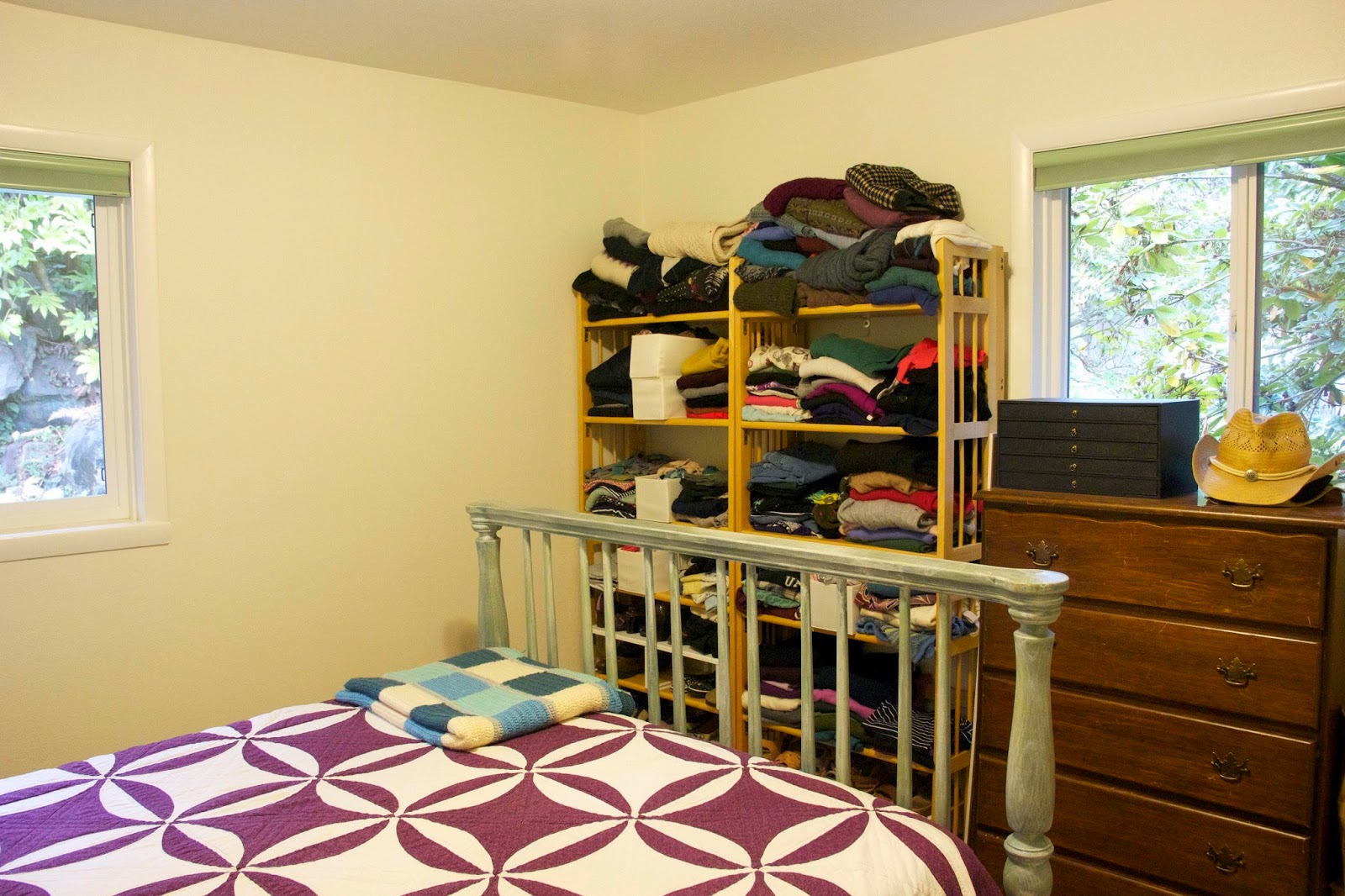 
My man and I have been married for 10 years and we're now sharing a closet for the first time. 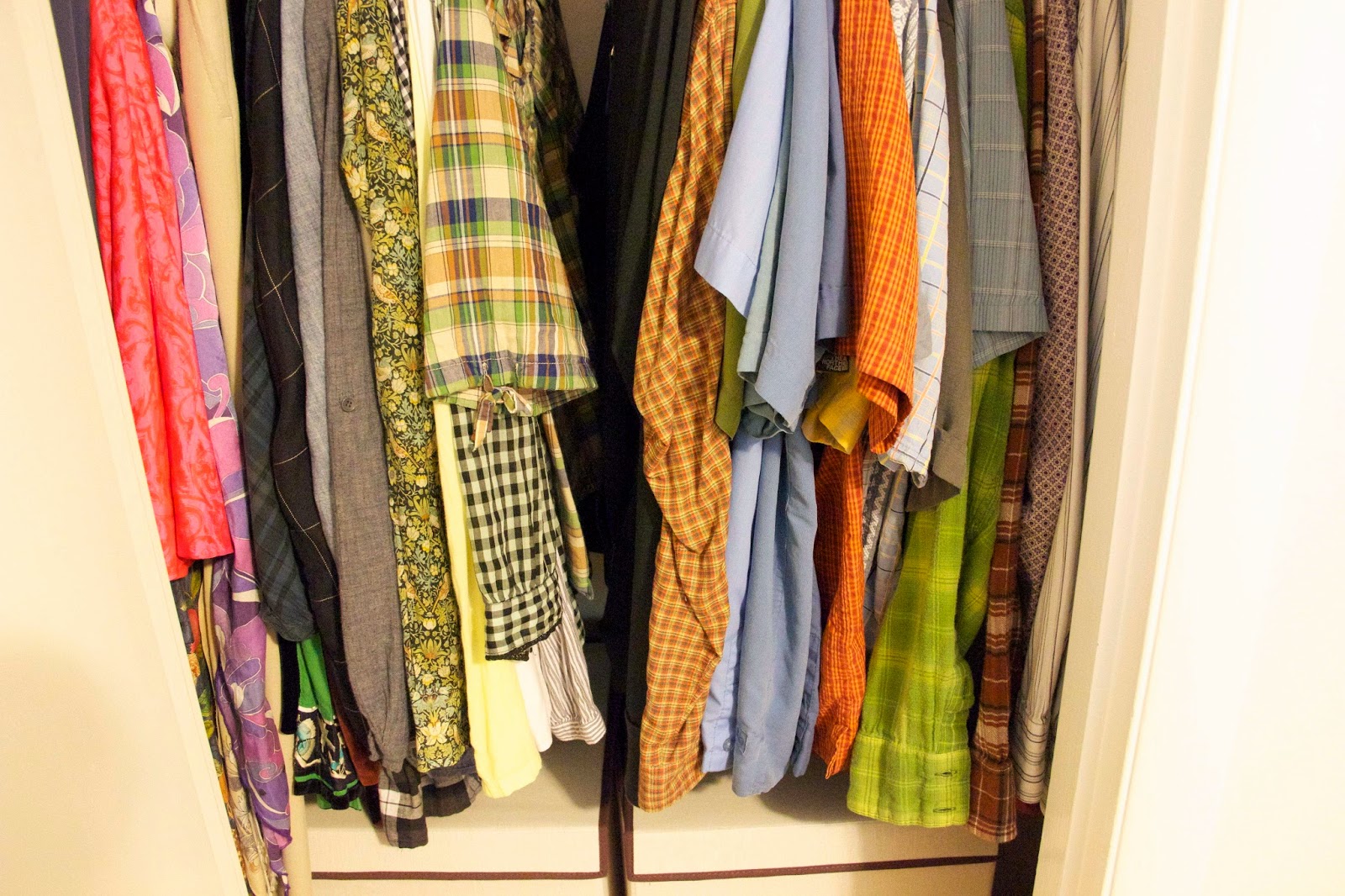 I wasn't sure I was ready for this level of intimacy, but so far, so good.

I will admit that I tidied up a little bit before taking these pictures, but otherwise they are completely un-"styled." (I mean, obviously.)

That's not usually how things are done in the blog world, but there's a philosophy to my madness. I'm not styling pictures because what I want to do is create spaces that look pretty decent and feel nice to be in without styling. I don't have time for styling in everyday life (and, sure, probably lack the talent to boot). 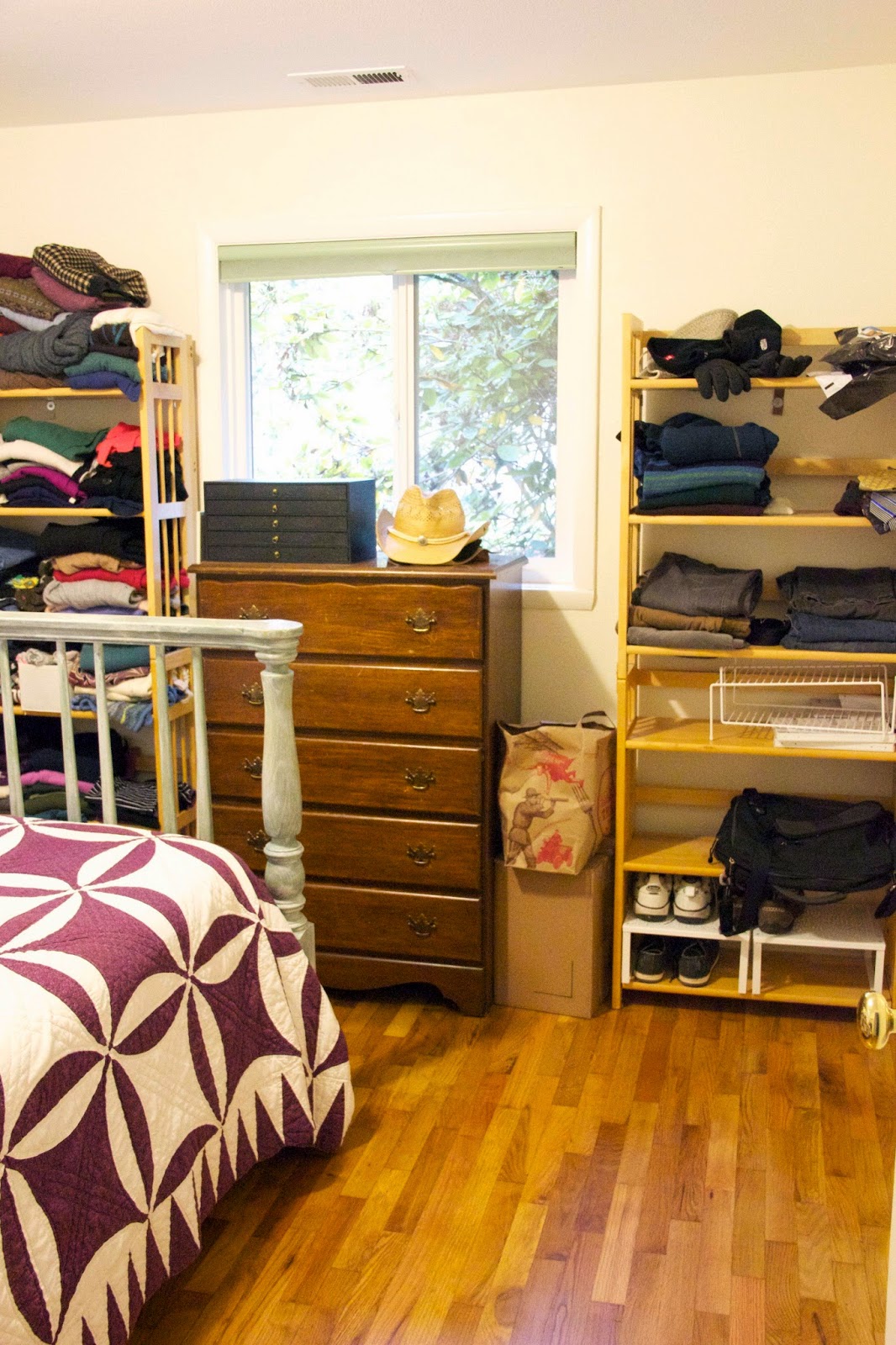 One of my informal goals is: Nothing on the floor but the furniture. My hope has been that if we created enough proper storage we wouldn't have to constantly tuck stuff in random nooks. But look at that space to the right of the dresser: that's a package (running shoes?) that my man received recently and a Goodwill bag (old running shoes). Though for the record, I could just as easily have been the guilty party here. But it's amazing how quickly those random nooks attract "stuff." Argh.

Anyway, you can see that we have most of the functionality of the room in place, but are missing the niceties that will pull the space together as a whole.

Still on the to-do list: install ceiling track just in front of the shelves, and hang some nice, white, floor-to-ceiling curtains to cut down on the visual chaos.

Eventually I'd like to find a shorter (and better quality) dresser to replace the one that we have now. That's going to take some looking, both because most dressers are either too tall to go under the window or too wide to fit in the space between the bookshelves, and because I have a particular look in mind. 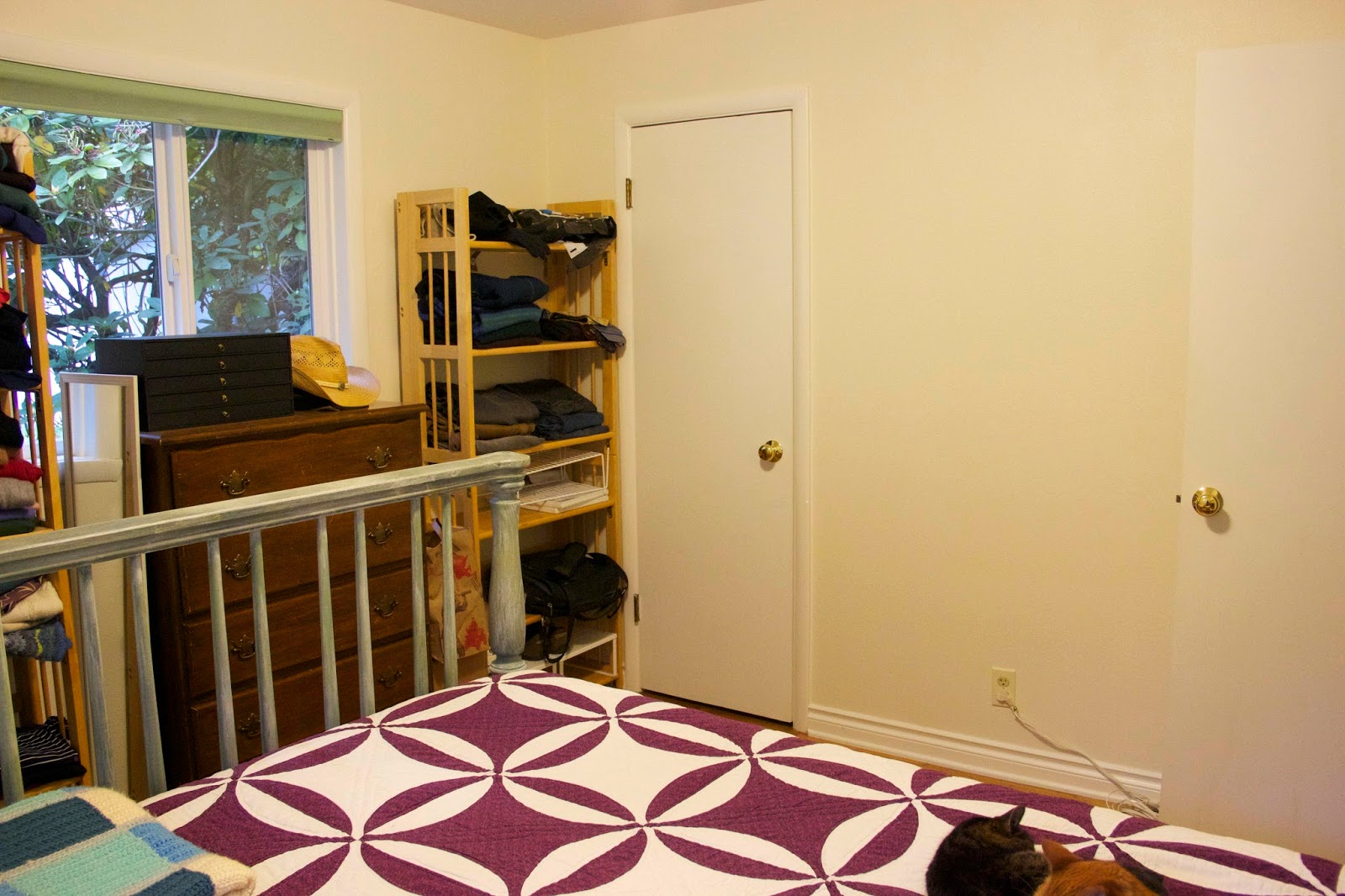 I also plan to clean up the barrister bookcase that was in the old office and put it back in its previous position on the East wall -- currently that big blank space above.

The bookcase is a nice old piece with sentimental value -- it belonged to my man's grandfather -- but it needs a good clean and spit-shine (or a liberal dousing with Murphy's oil soap and feed 'n wax, as the case may be). I think it will be a nice place to put my jewelry box and some framed old family photos and other sentimental things.

We need to get some art up on the walls and I have some pieces (that we already own) in mind, but I think it would be better to wait until the curtains and bookcase are in place.

The bedside tables are obviously a stopgap solution. 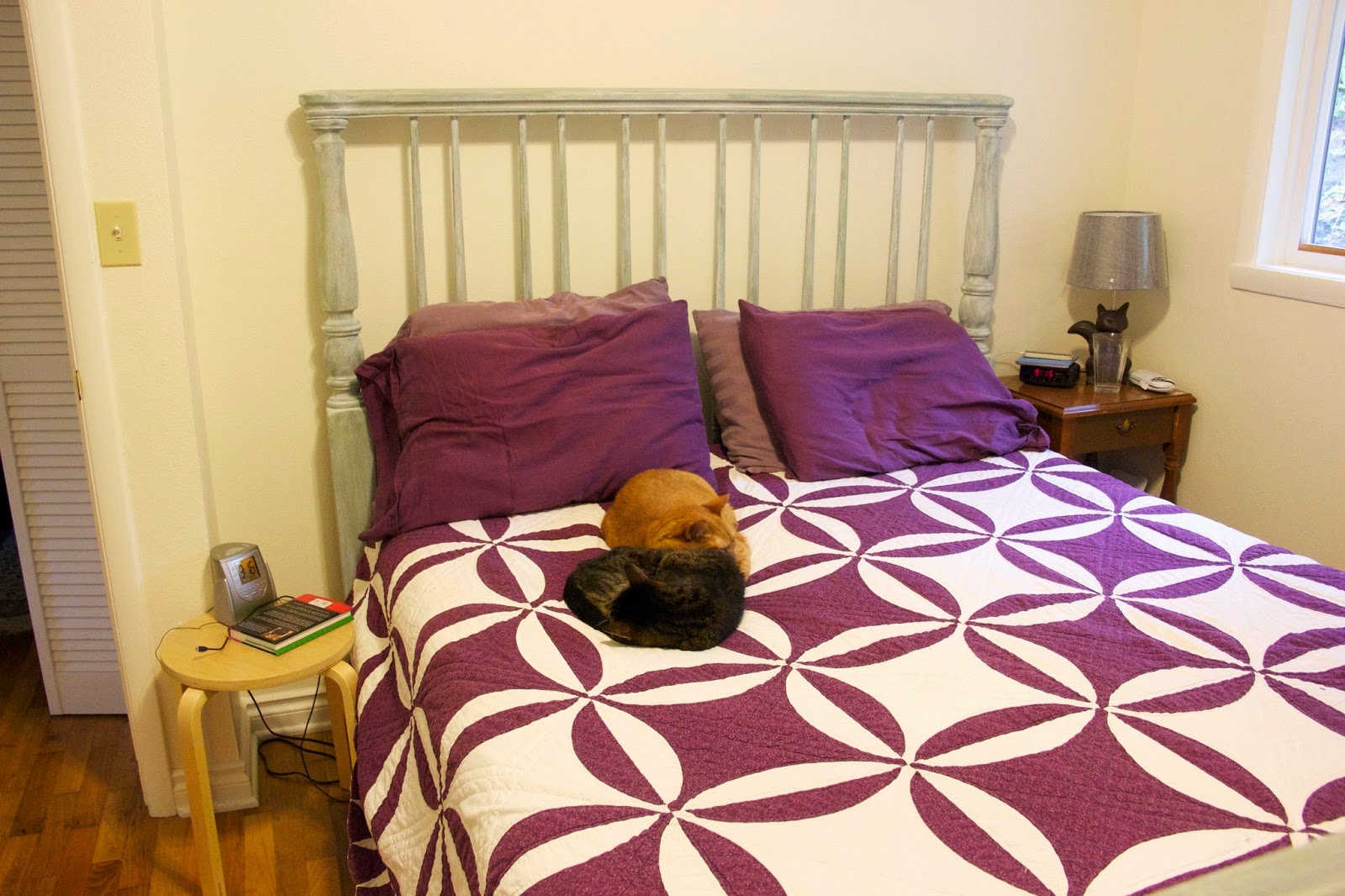 I'm thinking of a couple of small wall shelves mounted at nightstand height on each side of the bed. And a wall sconce for each of us as a reading light.

We also want to replace the godawful builder-basic ceiling fixture. 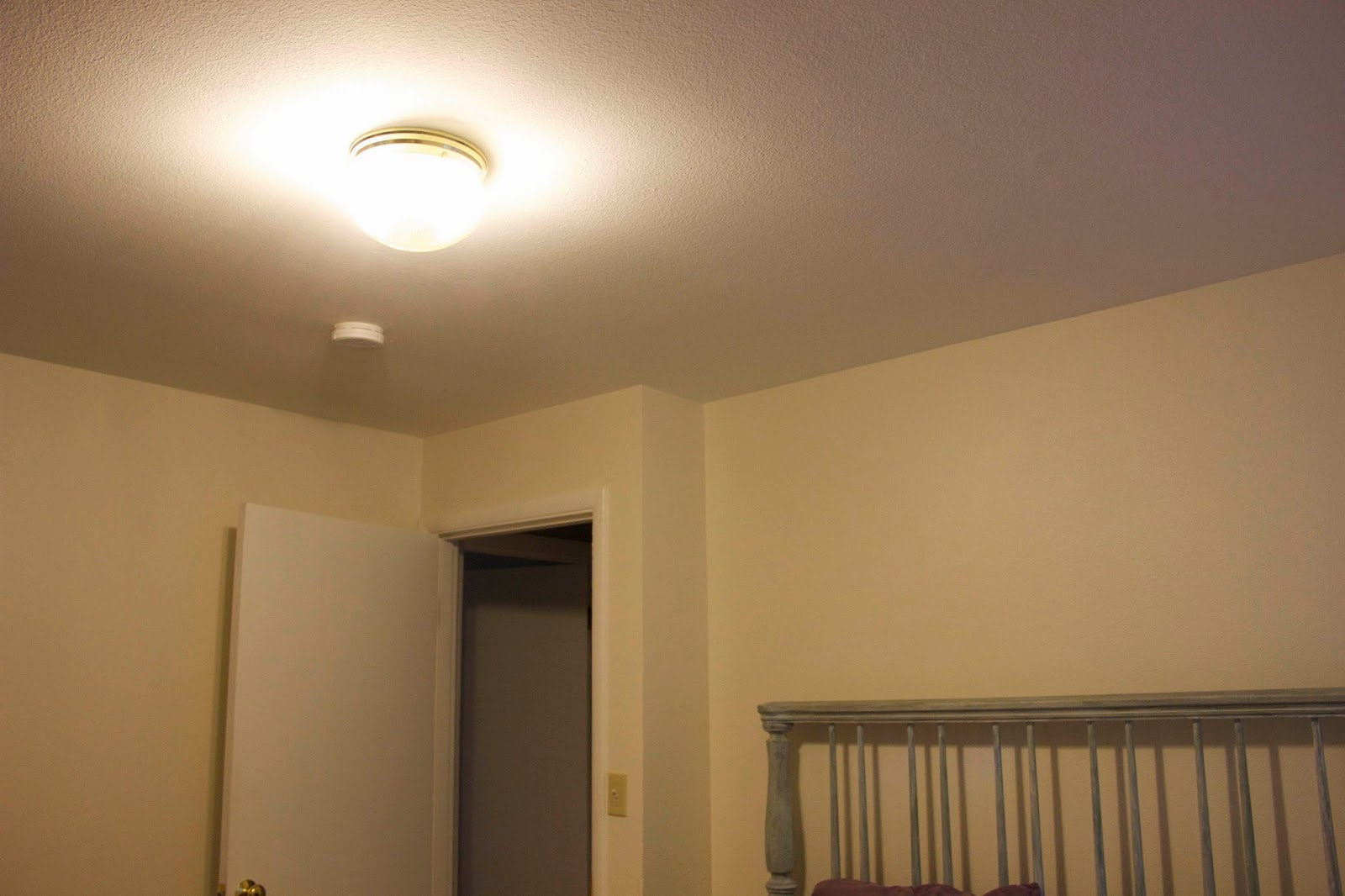 Actually I'd like to bring the one from the old bedroom in here. So the real task is finding something not-godawful to go in the new office.

The next step likely to happen in here is the curtains -- I've purchased and pre-washed the curtains, and the ceiling track is on the way. The bookcase cleanup is also a feasible weekend-level project, and we have the necessary supplies on hand.

I think hanging the curtains will really make a big difference in how "finished" the room feels. However I haaaaaaate hemming curtains -- it's sewing that is both boring and requires extreme precision. So we'll see which task actually gets tackled first. (Not this weekend though, I have a deadline on Monday!)
Posted by Sarah at 8:53 AM