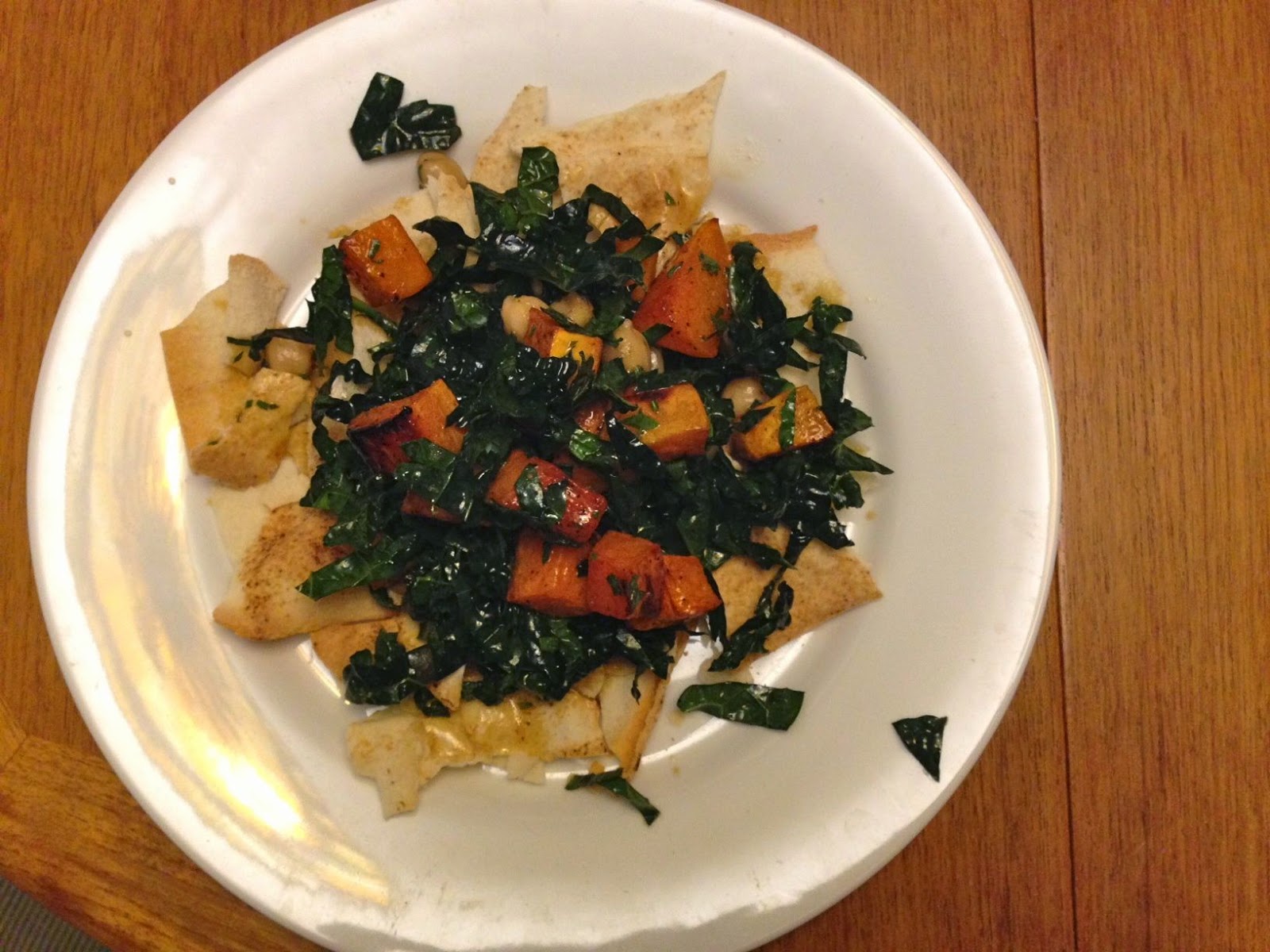 All this moving furniture and banana boxes around is making me hungry, how about you?

Here is a recipe I developed last week that I think was successful enough to deserve sharing.

I really love fattoush, a Middle Eastern bread salad that mixes cucumber, tomato, herbs, and pita bread with a sweet-tart pomegranate molasses dressing. Here is a fairly standard recipe if you're not familiar with the dish.

(My own recipe comes from a good friend, who semi-copied it from a cookbook, possibly the one written by one of her Saudi aunts, and who generously gave me the go-ahead to share my adaptation here.)

I wanted to try to create a version with fall vegetables so here is how I went about it. Peel and seed a butternut squash: 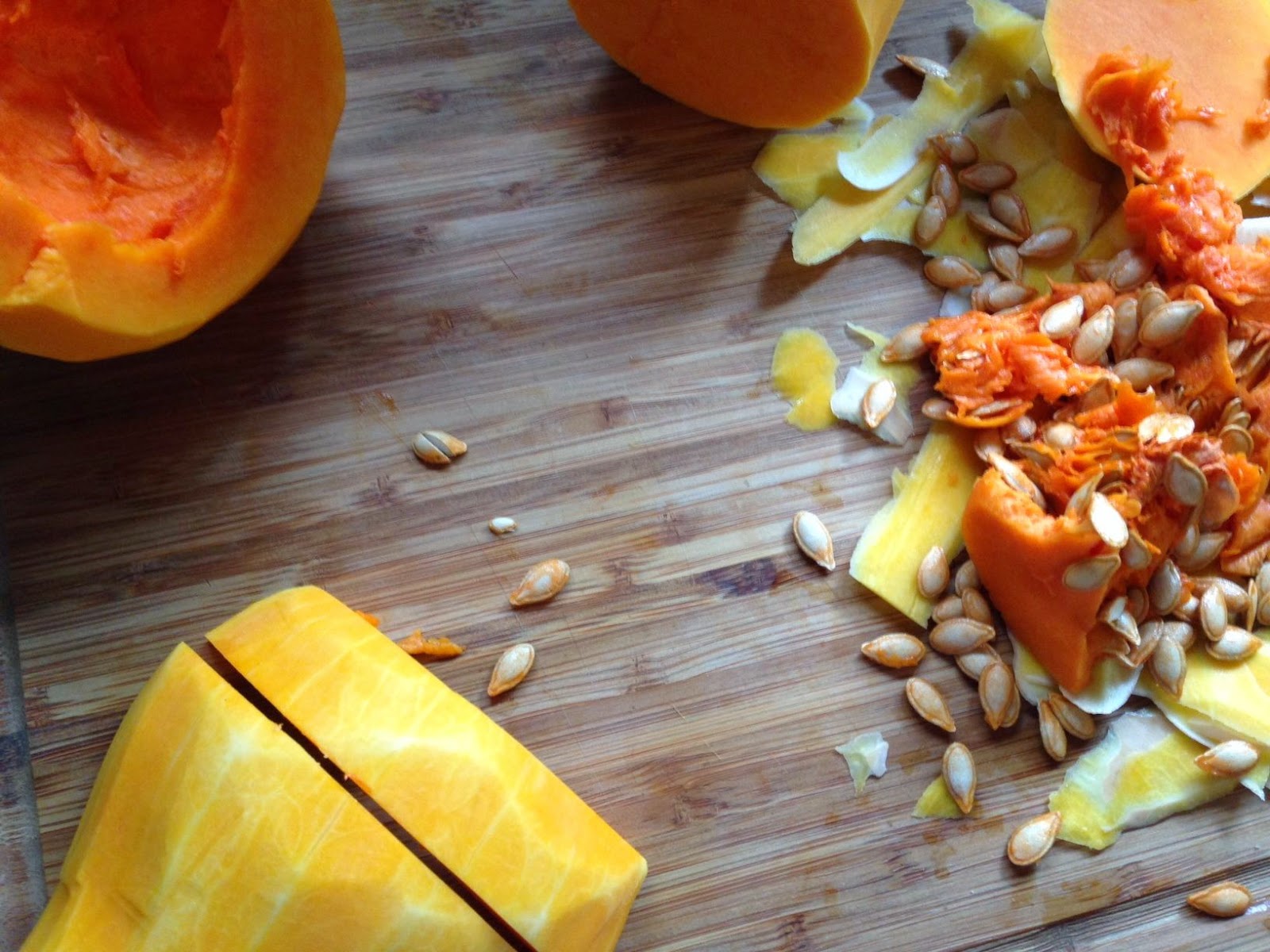 (Incidentally, I had a pretty serious run-in with a butternut squash a couple of years ago -- serious enough that I still have a small numb patch on the tip of my left thumb -- and ever since then I have been dealing with butternut squashes by peeling them first with a vegetable peeler, then cutting them up. I highly recommend this method as it is much safer!)

Dice up your squash into roughly 1" chunks: 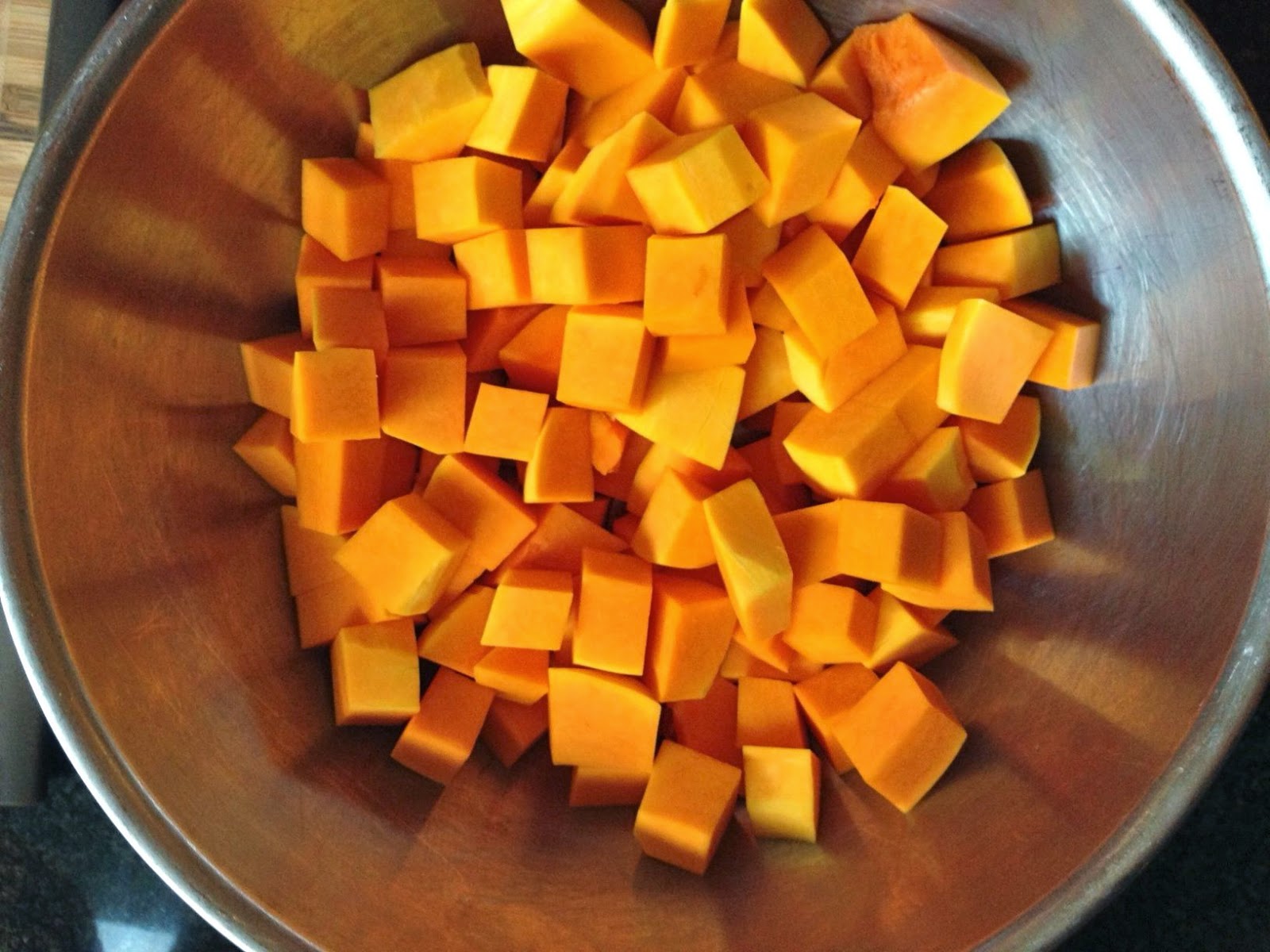 Toss the squash with olive oil, pomegranate molasses, and some spices. Some recipes for fattoush include sumac, a tart spice made from the dried fruits of a shrub, in the dressing. In this recipe I opted to toss the sumac with the squash before roasting. The dark red speckles are really pretty! 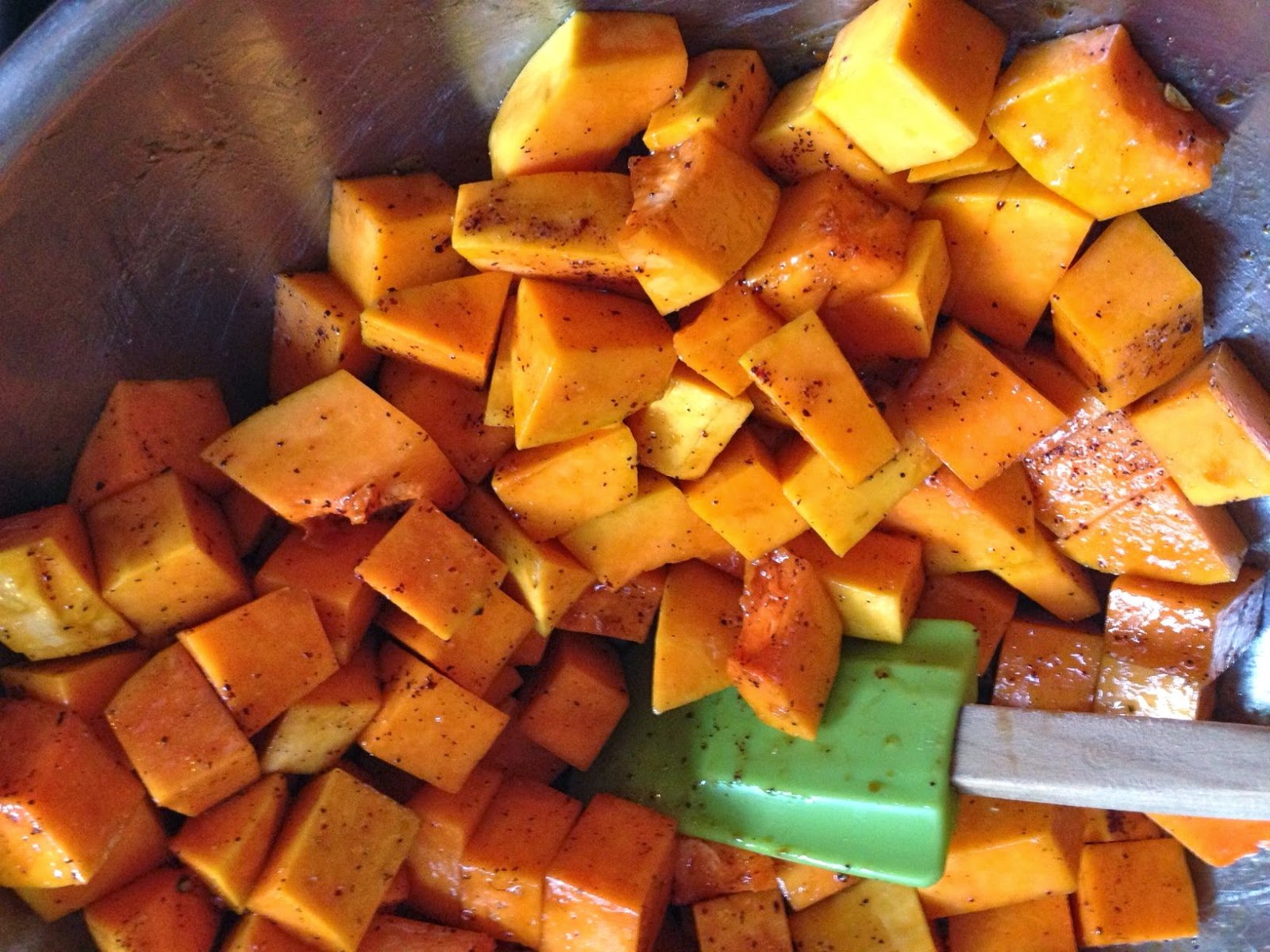 Spread the squash out on a baking sheet (I like to line mine with parchment paper): 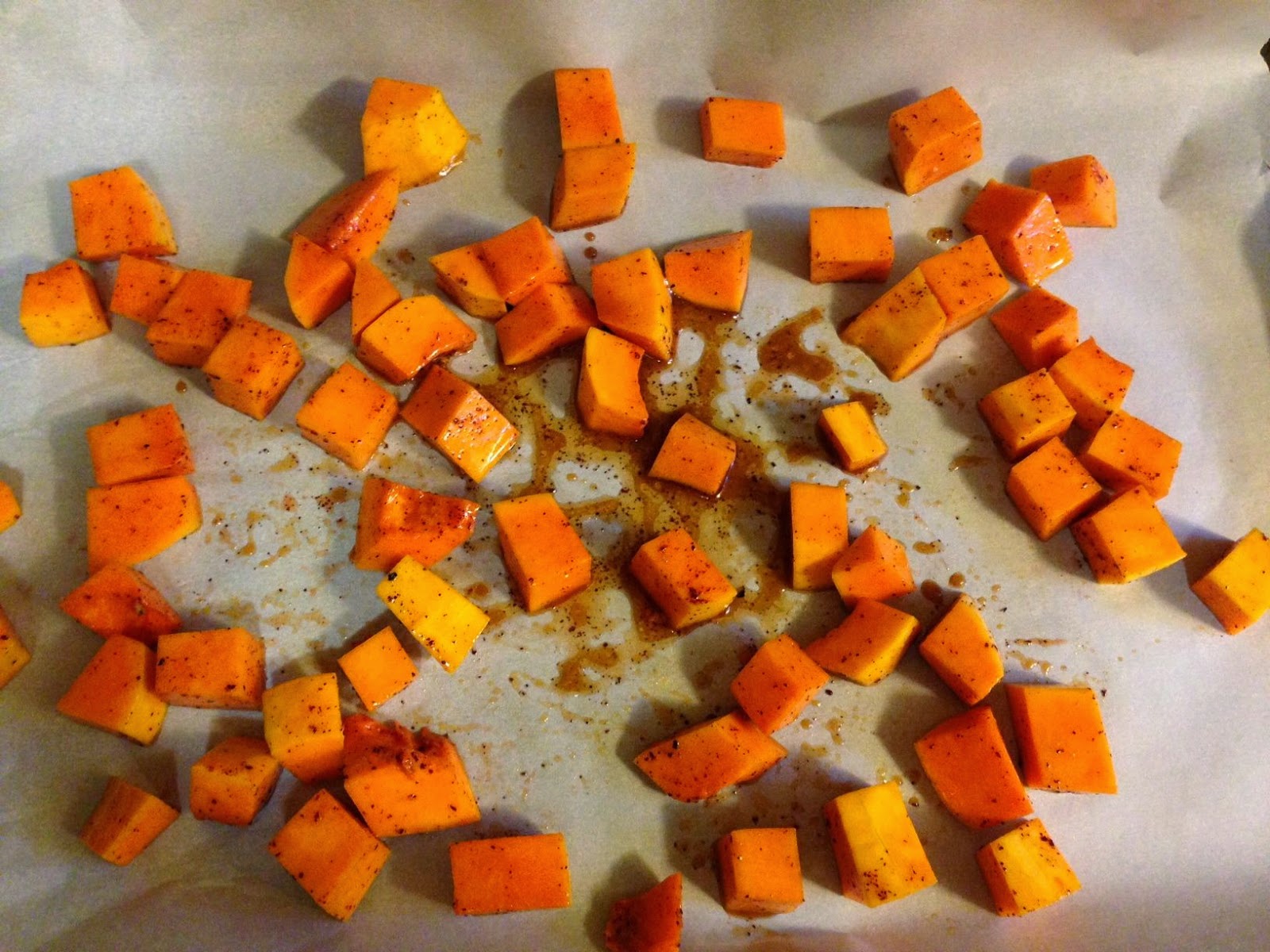 And roast until soft on the inside and a bit caramelized on the outside: 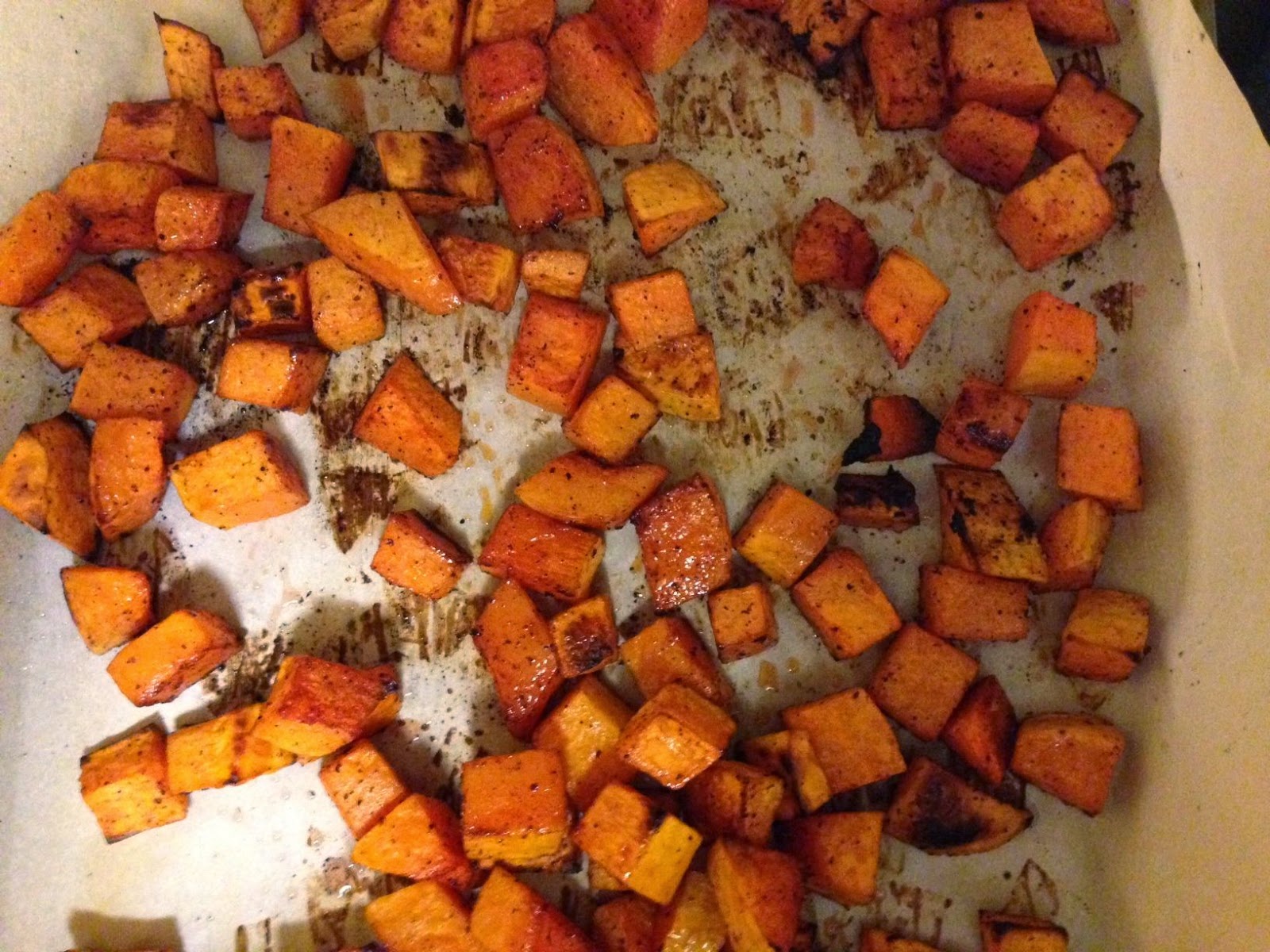 Now get yourself some kale: 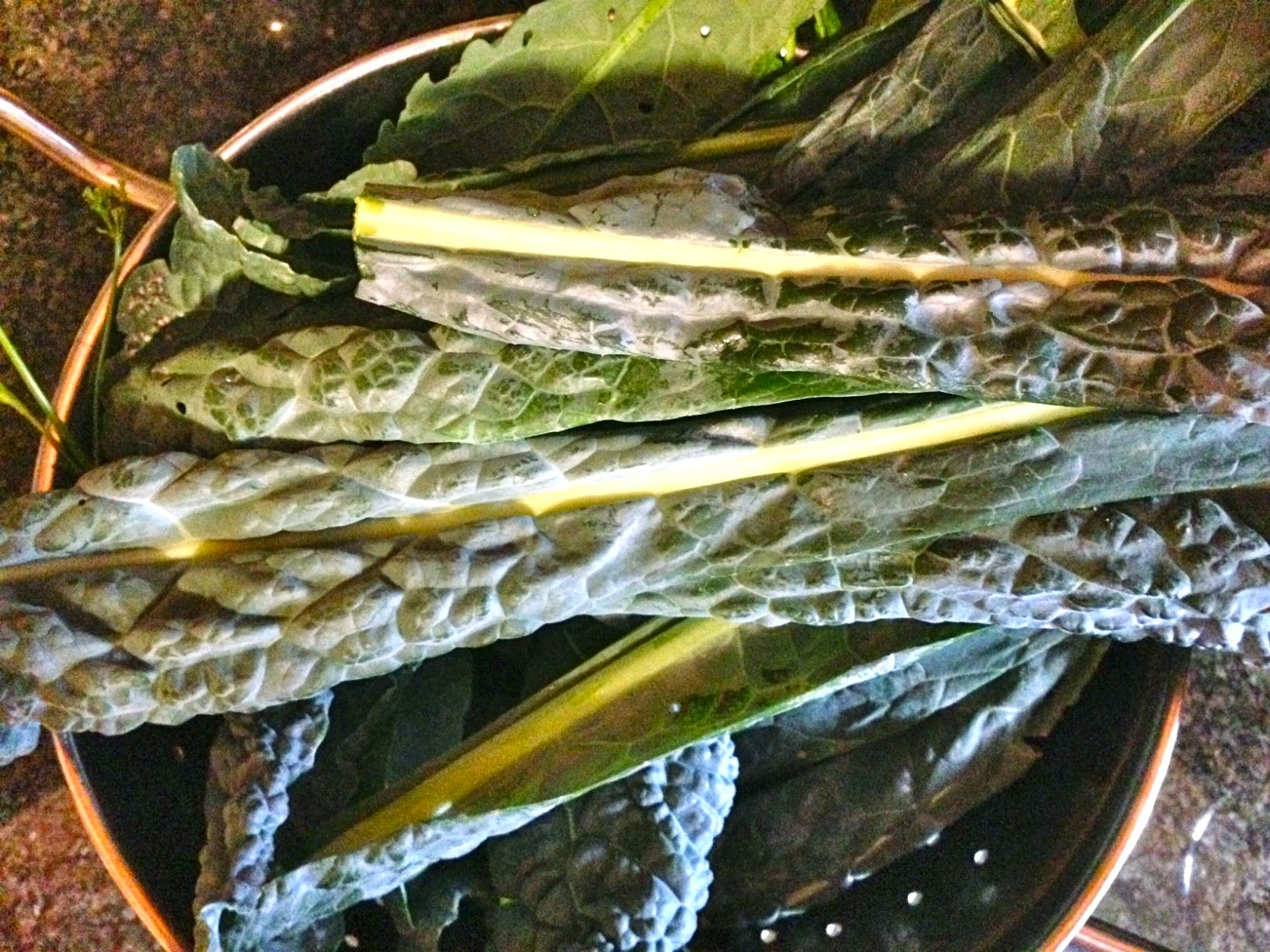 Wash it, get rid of the tough center ribs, and thinly slice. (Here's an explanation of the latter two steps; if you are still painstakingly de-stemming kale with a knife, you really need to click on that link.) 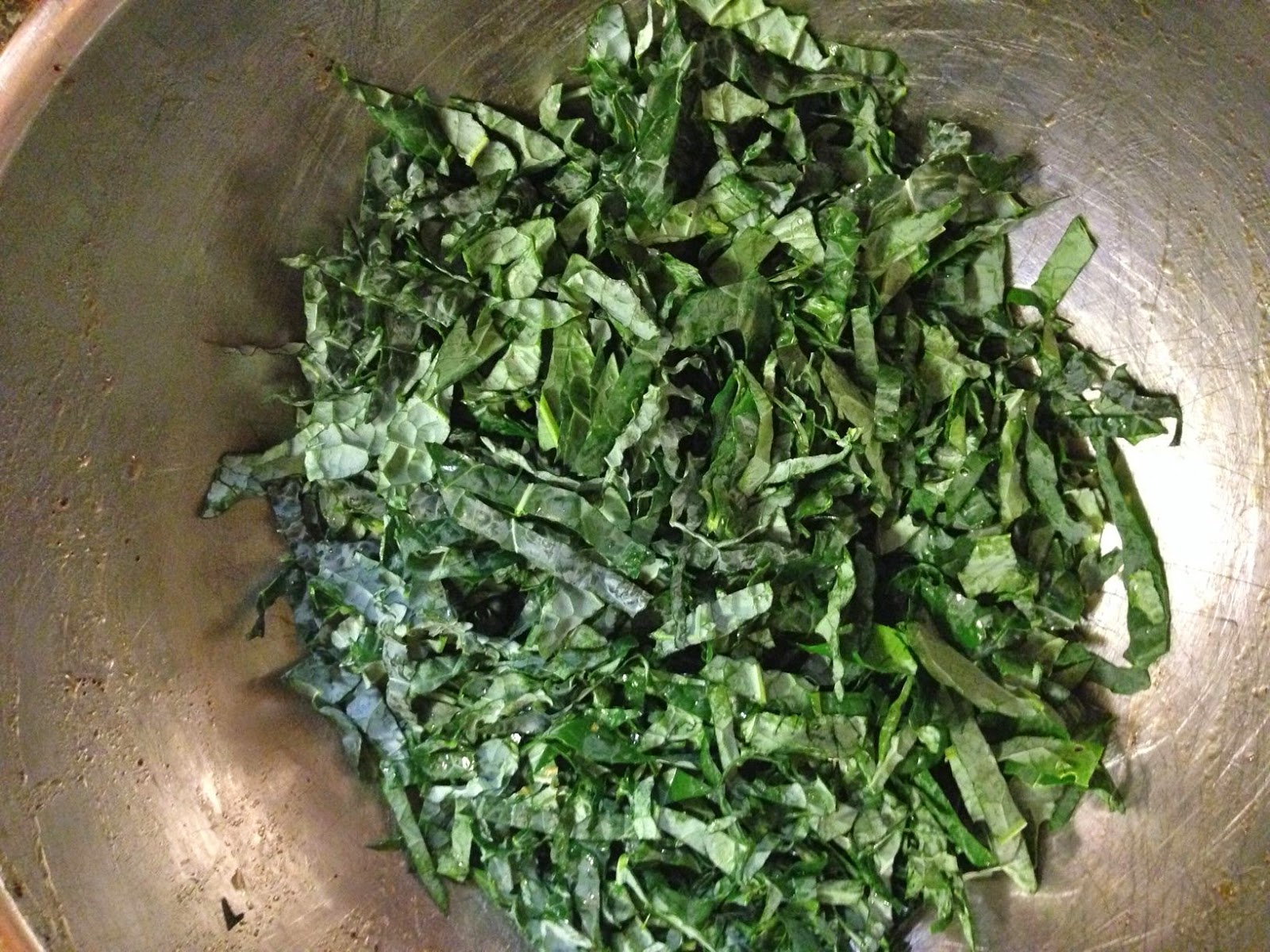 Finely chop some herbs and add them to the kale: 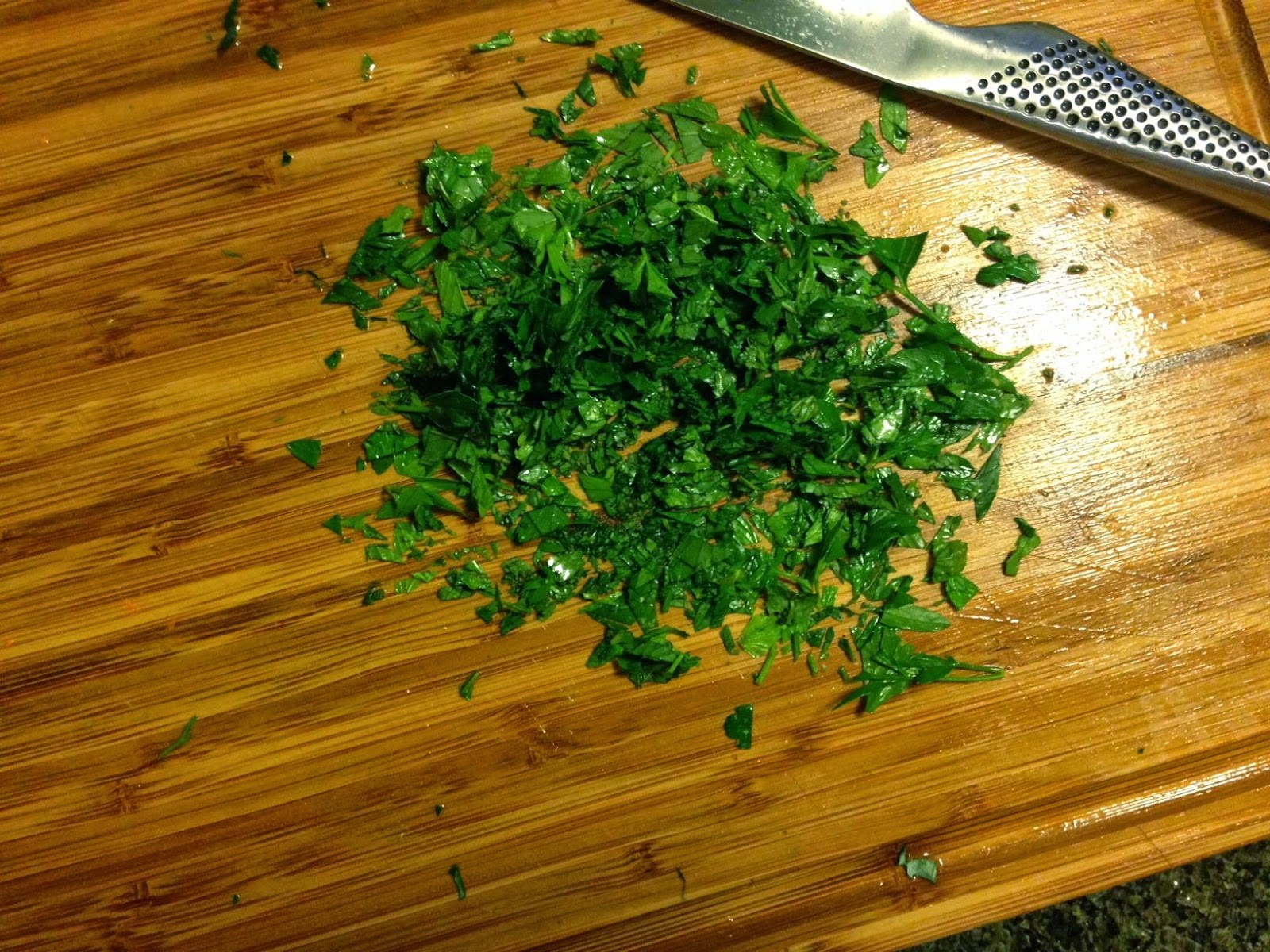 Add some chickpeas for heft; this is supposed to be a hearty autumn salad after all: 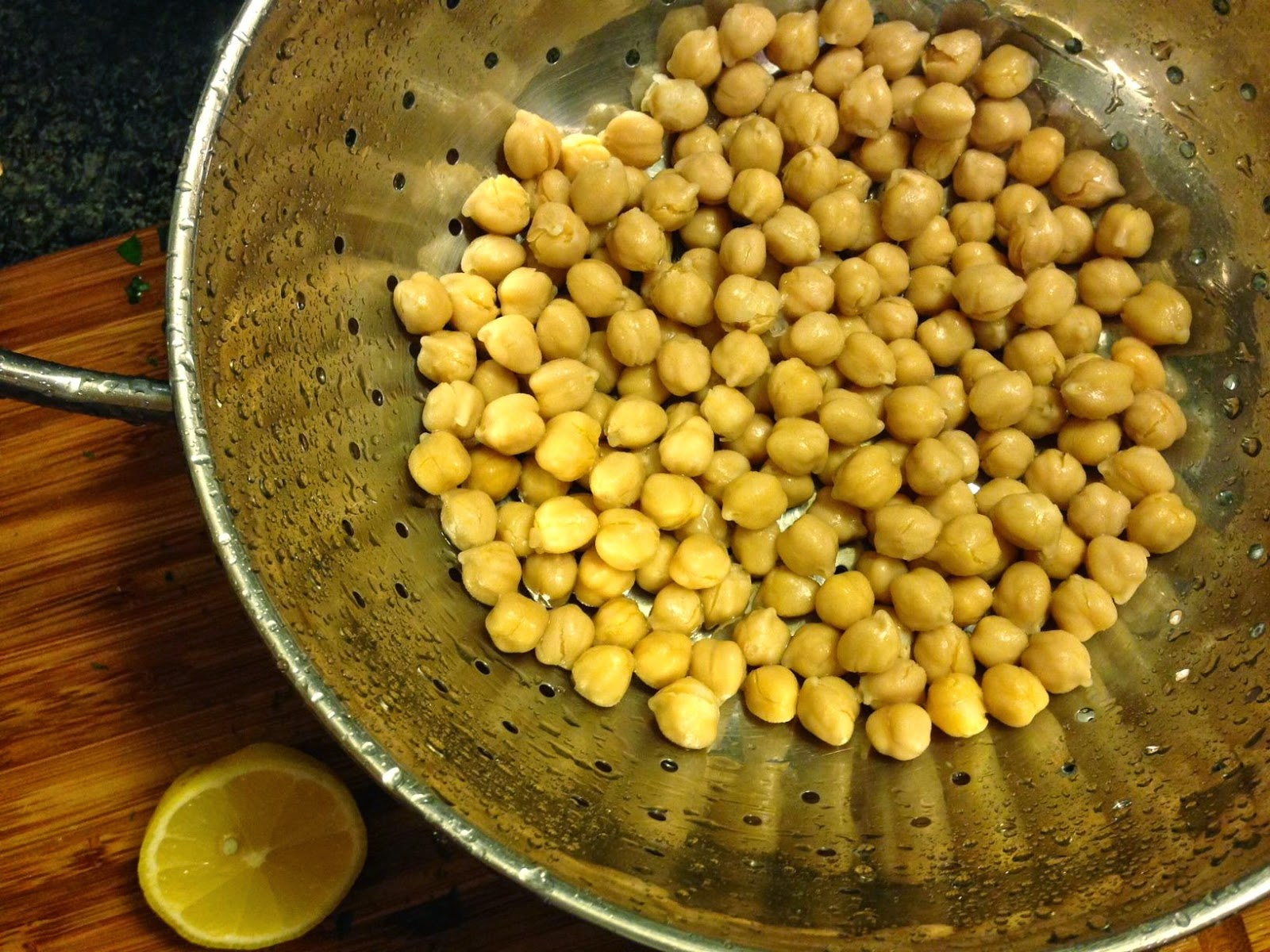 Toast some pita bread (and then break it up into pieces): 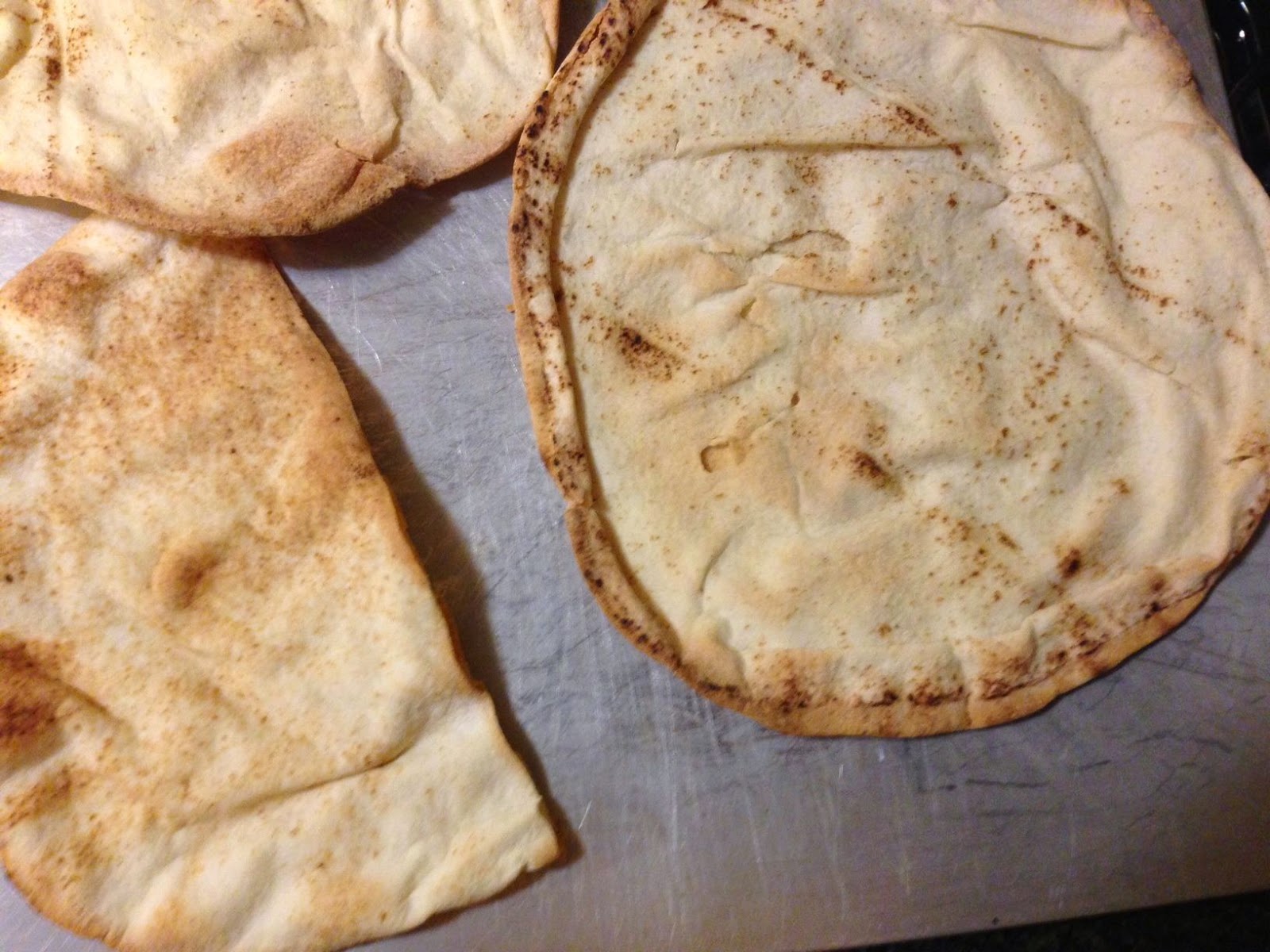 Toss everything together with the dressing and you're set:

Some notes:
1) This makes about 4 generous servings. Nevertheless, it's not really a meal on its own. Next time I think I'll serve it with a red lentil soup, brown-lentil-and-rice mujaddara, or a Persian frittata (all three of those exact recipes are absolute staples in my house, by the way).
2) I sort of hate when recipes leave you with leftover ingredients the way this one does, because those leftover ingredients tend to go to waste before I can think of how to use them up. In this case, if you are serving a crowd, you could simply make a bigger batch of fattoush, doubling the kale, herbs, pita, and dressing, and using all of the roasted squash and a whole can of chickpeas. If not, you could take the leftover squash and chickpeas and mix up a quick tahini dressing to make this salad, which makes a great quick lunch stuffed into a pita.
3) I think this would also be very good with the addition of some pomegranate arils. As a matter of fact I bought a pomegranate and then forgot to add it when I made the salad! But I've included it below even though my photos don't reflect that option.

Toss the squash with the other ingredients and spread on two baking sheets lined with parchment paper. Bake at 425 F for about 40 minutes, stirring the squash and switching the position of the baking sheets halfway through.

Whisk all ingredients together in a bowl.
To assemble the salad:
2 large rounds pita bread
Half of the roasted butternut squash, above
1 bunch Tuscan kale, washed, tough stems removed, cut in chiffonade
Handful of mint, chopped fine
Handful of parsley, chopped fine
1 cup chickpeas (about 1/2 of a 15-oz. can, drained)
1/2 cup pomegranate arils (optional)
Fattoush dressing, above

Toast the pita bread on a baking sheet in a 425 F oven for 10 minutes, flipping the pita rounds over after 5 minutes. Remove from oven; when cool enough to handle, break up into roughly 2-inch chunks.

At least 30 minutes before serving, combine the kale, herbs, squash, chickpeas, and pomegranate arils in a large bowl. Pour the dressing on top and toss well. This portion of the salad keeps well for several days in the refrigerator.

About 30 minutes before serving but no more, toss the broken-up pieces of pita with the rest of the salad. (You want the pita to soften a bit in the dressing, but you don't want it to get soggy. So if you expect leftovers, just toss together the proportion of bread and salad that you plan to eat imminently, and leave the rest separate for later.)
Posted by Sarah at 7:27 AM