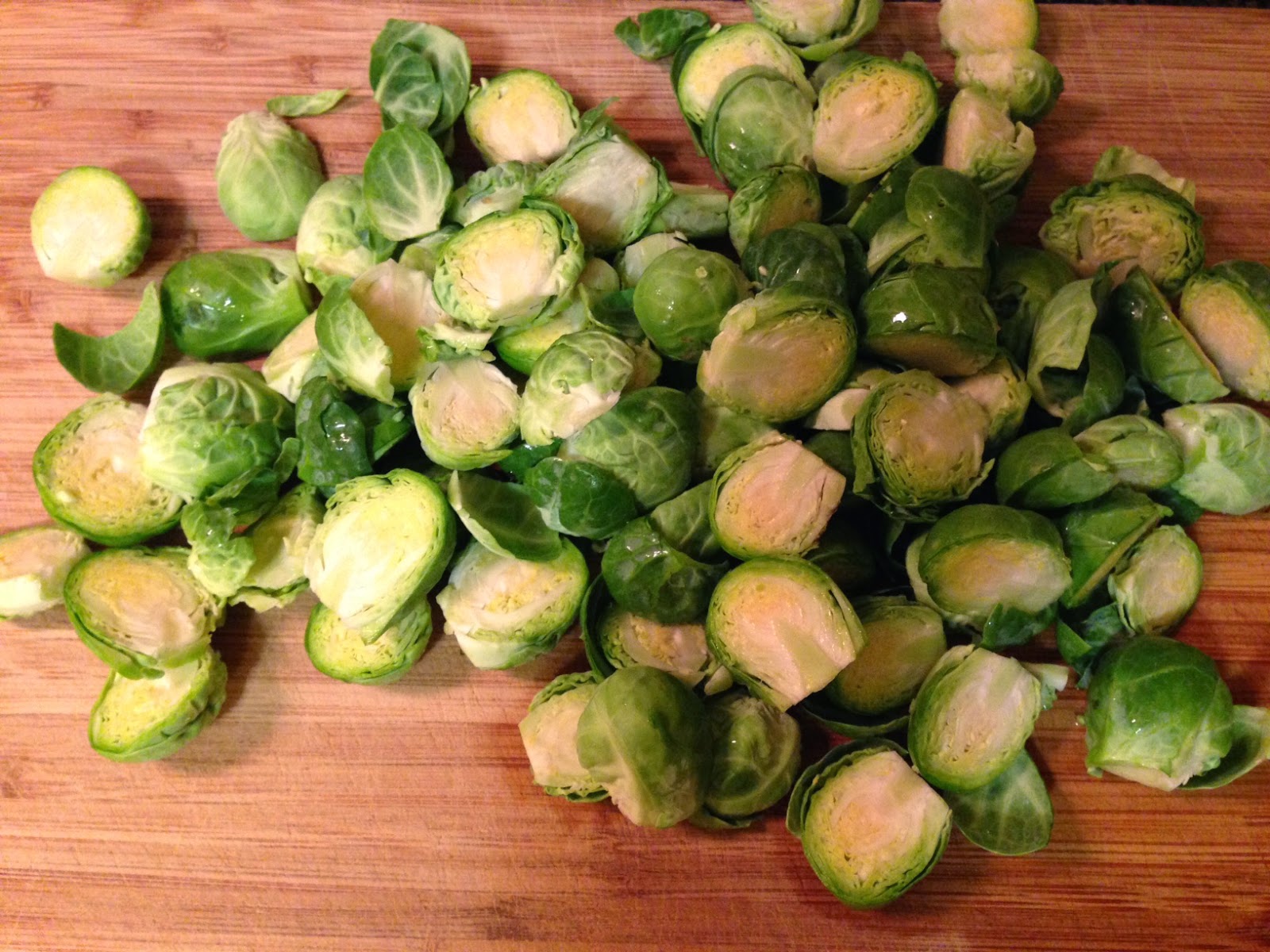 Alright, I know, Brussels sprout season is almost over, if it isn't already. But it took me a while to work out this recipe so I wanted to post it here while it's still fresh in my mind.

This dish is actually very simple to make -- it's a version of fatteh, a Middle Eastern dish that combines toasted pita bread, vegetables and/or meat, and a garlicky yogurt sauce. Etymologically it has the same root as fattoush, or pita bread salad; both dishes are designed to use up stale bread. Well, bring on the plant-based peasant food, is what I always say.

The inspiration for this Brussels sprout version comes from a meal my husband and I had a couple of months ago at Mamnoon, a local Syrian/Lebanese restaurant. Their Brussels sprout fatteh -- or what was left of it by the time I thought to snap a picture -- is in the bottom left corner of the image below. 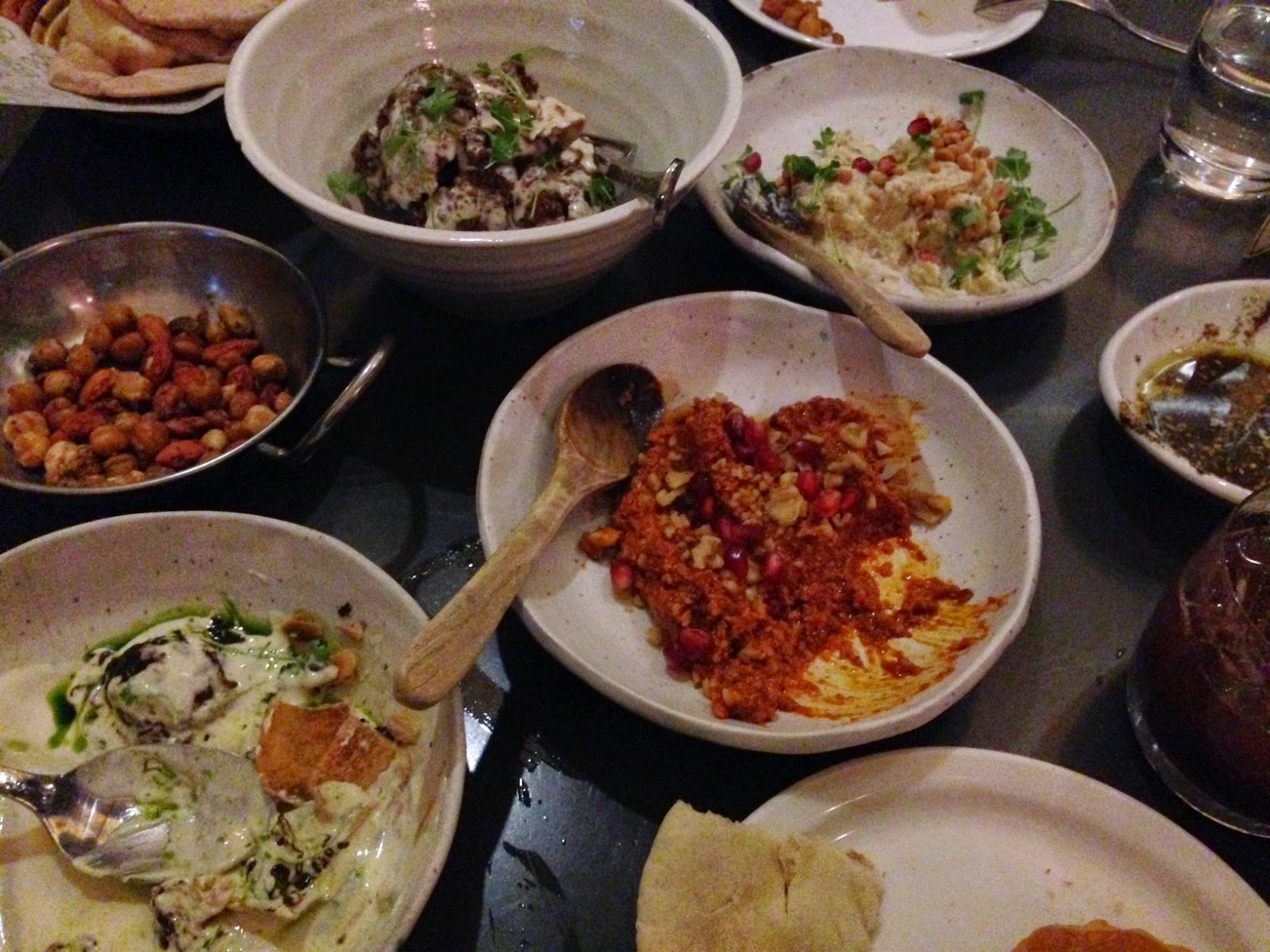 All of the mezze we had that night were amazing. There were foodie touches like kale butter swirled into the yogurt that topped the Brussels sprouts, and baby arugula accompanying the feta-stuffed sambusek pastries. But these didn't seem like mere trendy flourishes; instead they added to the flavor of each dish, without obscuring the simple, unpretentious nature of these foods.

I was also really glad to see this on our table: 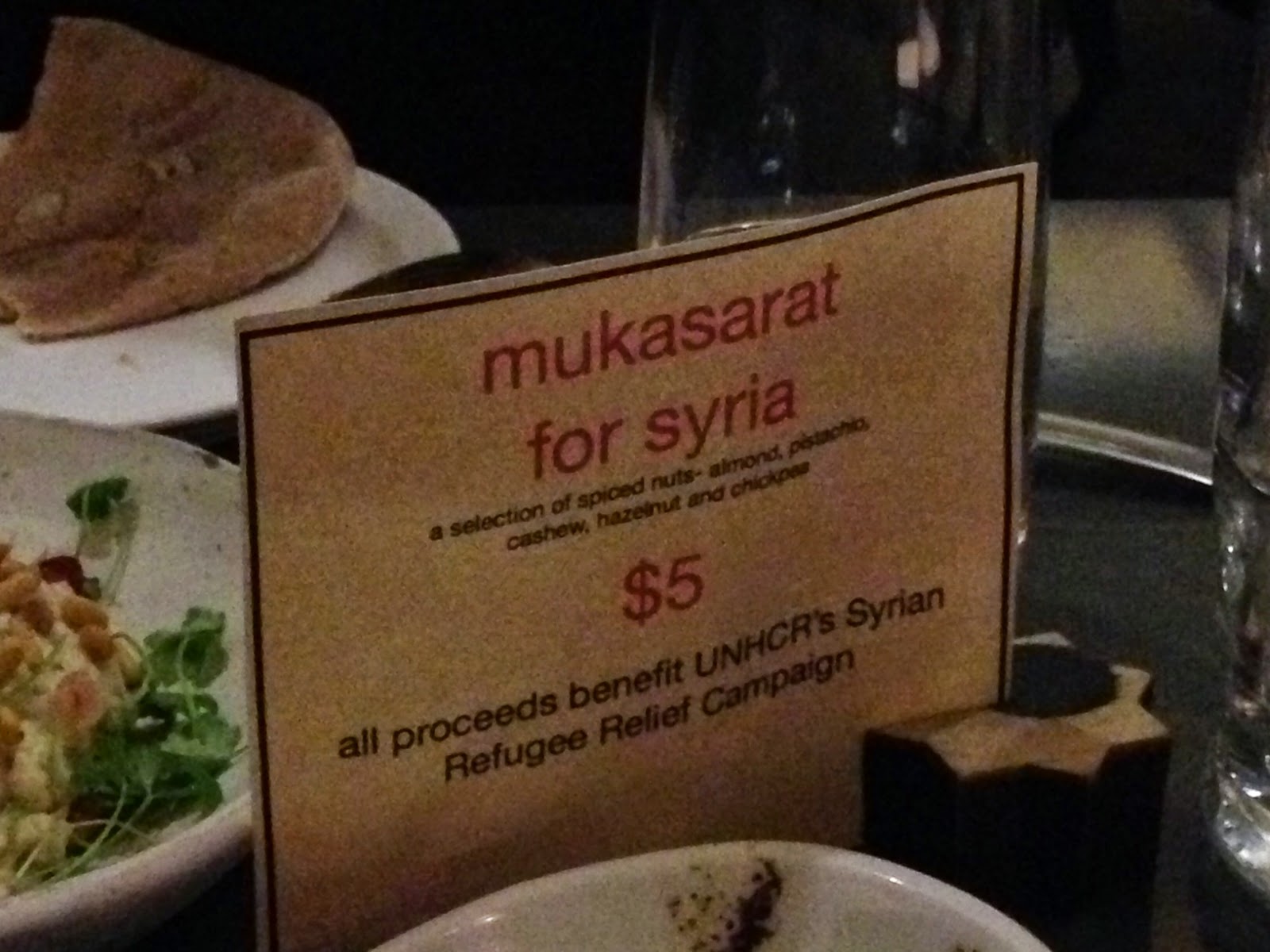 Please don't misunderstand me here. I'm not trying to encourage slacktivism, and I certainly am under no illusions that my purchase of an appetizer is going to fix the situation in Syria. But it was nice to see a restaurant acknowledge the world we live in (this date night happened to be at the end of the week of the Charlie Hebdo attacks, so I was feeling rather bleak about the state of that world). And a relief to think that there might be an option other than total despair and self-abnegation on the one hand, and fiddling while Aleppo burns on the other.

As for those Brussels sprouts, what intrigued me was the sauce, which was gently, warmly garlicky rather than sharply so as it has been when I've made various versions of fatteh before. At first I thought the garlic might be roasted, but when I tried this the flavor got completely lost, even when I mashed an entire bulb of garlic into the yogurt.

In the end I turned to a trick from The New Best Recipe, which is my basic-recipe bible. In the recipe for basil pesto, the editors (the same nerd-tastic folks who run Cook's Illustrated magazine and America's Test Kitchen on PBS) suggest toasting whole, unpeeled cloves of garlic in a dry skillet to tone down its sharpness. That technique provided the flavor I was after in the yogurt sauce here, too. 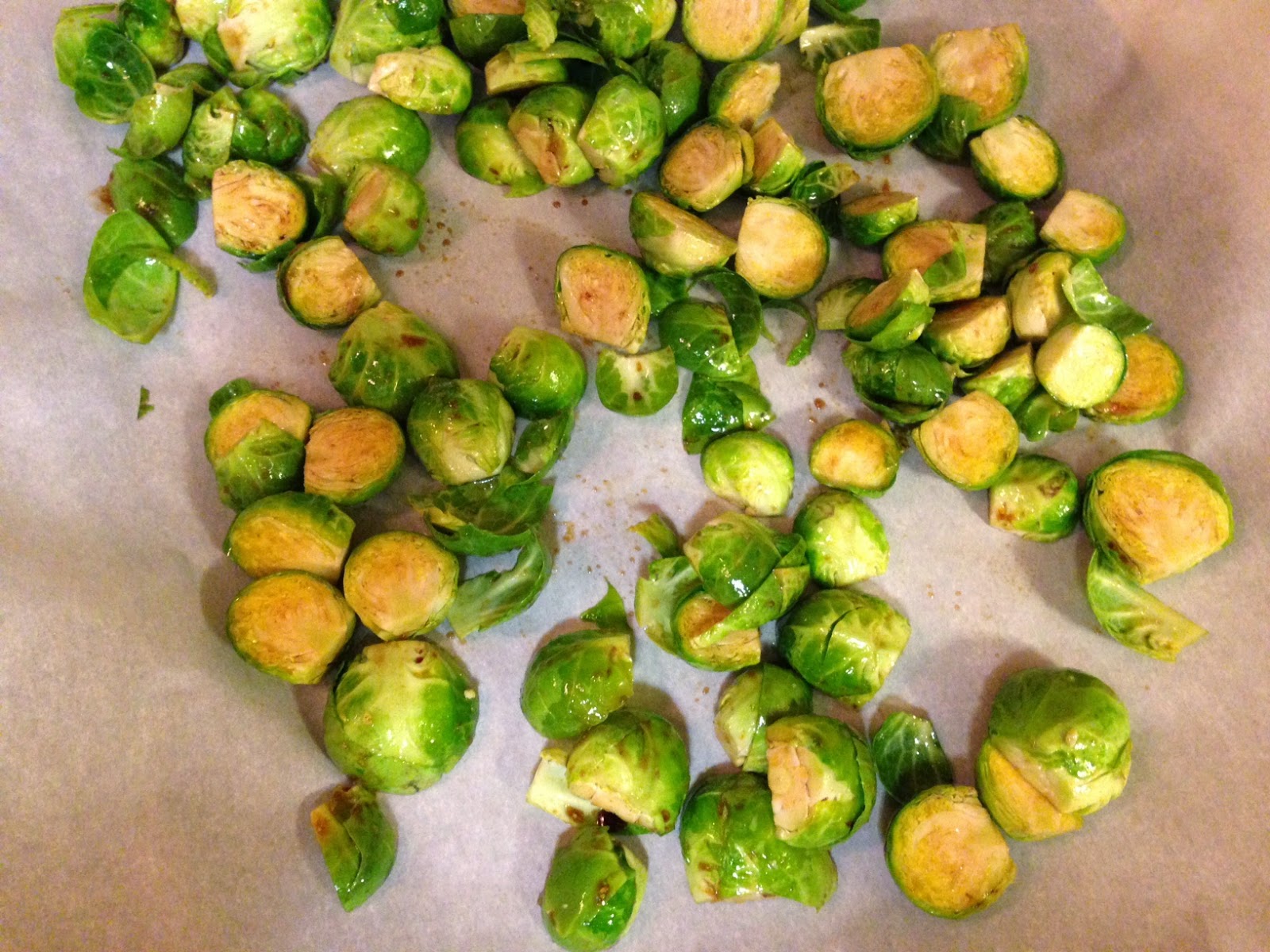 In fact, I used a second technique from The New Best Recipe to cook the Brussels sprouts, too. When I roast Brussels sprouts, I am often frustrated by the way they cook unevenly -- the single leaves that fall off the outside when you trim and quarter the sprouts are charred before the sprouts themselves cook through. So I borrowed a method from the book's recipe for oven fries: cover the baking sheet with a second baking sheet and let the vegetables steam for the first five minutes in the oven, to get a head start on cooking.

One more note on ingredients: I am sorry to be a snob, but you need to find yourself a proper Middle Eastern market and get some good pita bread -- big, delicate loaves, not the thick, doughy stuff that passes for pita bread in mainstream American supermarkets. That stuff won't fly here (ask me how I know).

Alright, so the result of all this tweaking is the recipe below -- I hope you enjoy it, either now or next winter! 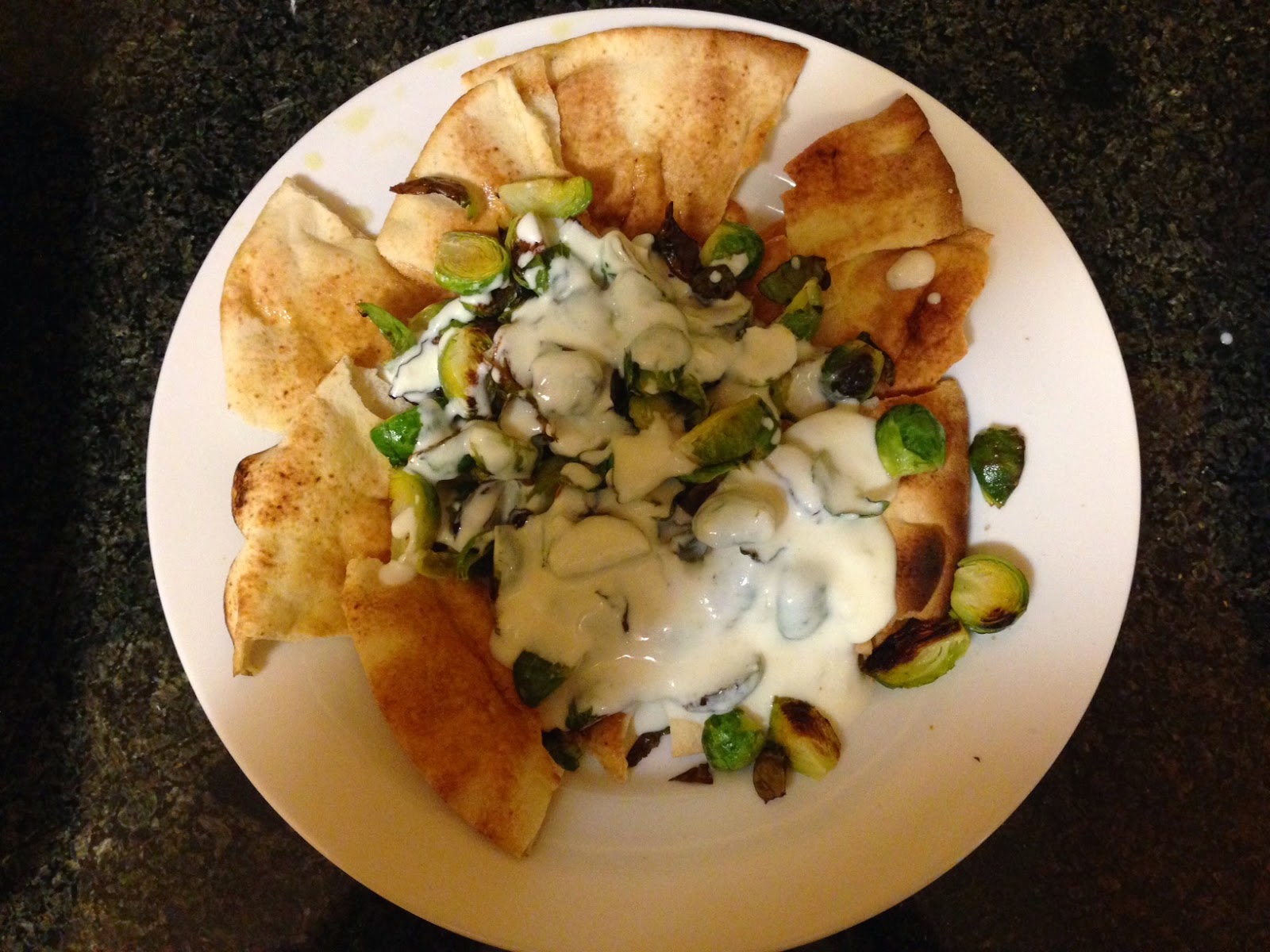 Place the pita bread on a baking sheet and brush very lightly with olive oil. Put in oven and toast until the top of the bread is dried out but not browned. (You can do this while the oven is preheating, if you like. I don't know how fast your oven heats so I can't tell you how long it will take -- 5 to 7 minutes I'd guess, just keep an eye on it.) Remove bread from oven, flip over, and brush the other side of the loaves with oil, again very lightly. Sprinkle with a little bit of salt. Put back in the oven for another 5 minutes or so to crisp up the other side. Remove from oven and let cool while you cook the Brussels sprouts.

To make the yogurt sauce, place the plain yogurt in a bowl. Heat a small skillet (I like cast iron) over medium heat and place the garlic, with the peel still on, in the skillet. Toast, shaking every now and then, for about 5 minutes, until the garlic is fragrant. When the garlic is cool enough to handle, peel it and press it through a garlic press into the yogurt. Add a pinch of salt and stir the sauce ingredients together.

To assemble the dish, break the pita into pieces with your hands and place on two plates (I like to have some small pieces that can get soaked-through with yogurt as well as some large pieces that I can pick up and use to scoop up the rest of it). Divide the roasted Brussels sprouts between the plates and pour the yogurt sauce on top.