About & Abroad: Our Montreal Christmas Trip 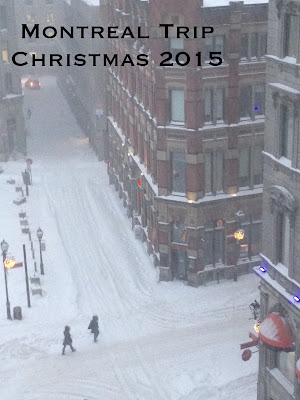 Before the event recedes too far into distant memory, I wanted to type up some reviews and recommendations from our trip to Montreal over Christmas.

First, a few logistical thoughts. We stayed in the Old Montreal neighborhood, in an Air BnB a couple of blocks from the Notre Dame Basilica. This was really convenient, within easy walking distance of the Old Port and a lot of major sights, and I think was especially advantageous for a winter trip. (We considered a few places in the Plateau Mont-Royal neighborhood, and I could see that being nice in the summer, but I think I would have found getting around in the cold and snow a lot more unpleasant.)

We arrived in Montreal for our Christmas holiday the evening of December 23. This worked fine but I wouldn't have wanted to arrive any later -- grocery stores and such pretty much shut down for 48 hours from the afternoon of the 24th until around noon on the 26th. But as it was, we were able to get our bearings and get provisioned for the holiday.

In general Montreal closes for Christmas to a much greater degree than Amsterdam, which we visited over the holiday two years ago. There's still plenty to keep you busy, it just requires a bit more planning and Tetris-ing of schedules. Major museums and attractions mostly reopened the 26th. Some restaurants were closed from the 24th through the new year, others reopened the 27th or 28th, and some said they would reopen the 28th but...didn't. My advice is that if you want to go somewhere, and you can't see an affirmative statement on their Website or Facebook page that they are open, call first!

So with all of that said, here are some of the highlights from our trip. This isn't everyplace we went, just what I particularly recommend: 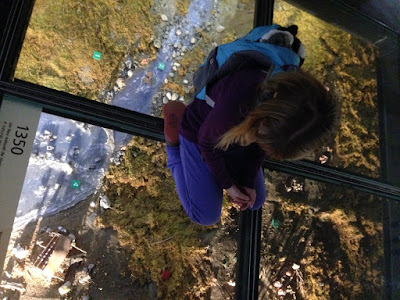 - Pointe-a-Calliere / Montreal Museum of Archaeology and History: This is both a museum and a working archaeological site featuring the ruins of some of the earliest structures in the city. An exhibit set up among the ruins traces the history of Montreal and Quebec from the time of European contact to the present. The story told here gave me a very different perspective on European settlement of North America than I'd gotten in my history classes in the United States: I could see much more clearly how geography, natural landforms, and especially the courses of rivers like the St. Lawrence and the Mississippi shaped this process. Utterly fascinating. While I liked the archaeological site and exhibition best, my daughter was partial to the little dioramas of Montreal scenes through different phases of the city's history. There is also an interactive, kid-friendly exhibit about pirates and privateers that I thought was quite well done, but my daughter declared herself totally uninterested on the grounds that pirates are "smelly, foul, and mean." Your mileage may vary. 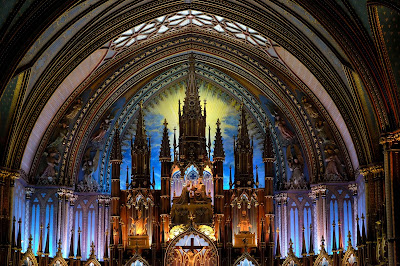 - Basilique Notre-Dame de Montreal / Notre Dame Basilica of Montreal: The city's grand cathedral, with decoration modeled on Sainte-Chapelle in Paris, had free admission (normally $5 CDN) on Christmas afternoon so we joined the crowds touring through the space. This was not a religious service, but did feel like a spiritual experience, albeit one of a secular sort (if it's not sacrilegious to say that about a church). What I mean is that marveling at the church's stunning blue nave, intricate wooden decorations, and tenderly carved statues of figures from Montreal's history with a crowd of people from all different backgrounds and traditions (e.g.: I saw a number of women wearing Muslim headscarves) felt very similar to standing in a crowd of people gazing at Rembrandt's The Night Watch, as we'd done exactly two years before. Which is to say it felt like an appropriate way to spend Christmas Day. 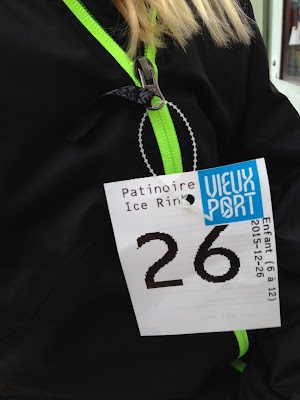 - Patinoire du Vieux-Port / Old Port ice skating rink: I can't say much from a first-hand perspective since ice skating tends to be a daddy-and-daughter activity in our family but this outdoor rink on the shores of the St. Lawrence River is well run, reasonably priced, and plays just-cheesy-enough music.

- La Ville Souterraine / Underground City / RESO: We treated this not as a destination in itself (though it could be) but as a means to an end, and we got almost all the way from our apartment to the Fine Arts Museum using this system of tunnels, shopping malls, office buildings, and subway corridors (there are 20 miles in all). It's worth trying out as a means of transport: Intermittently baffling, but fascinating and kind of awesome in the end. If you have a Minecraft fan with you, keep them engaged by marveling at how much time it must have taken to mine out all these tunnels!


- Musee des Beaux-Arts / Fine Arts Museum: We spent most of our time here viewing an excellent temporary exhibition on a jazz-age collective of Montreal artists. I wish I'd had more time to explore the permanent collections -- the museum has a really extensive collection of Quebec and Canadian art, organized into chronological exhibits, which I think could make a great art history lesson. My daughter and I did take in the Inuit Art collection, which is fairly small, focuses on contemporary artists, and is located in a wonderful little crow's-nest-like space at the top of one of the museum buildings. She found this really engaging and loved recognizing the Arctic animals and speculating about the monster-ish characters depicted in the sculptures. By the end of our time there she had sharper eyes than I did for the various materials (whale vertebra, etc.) used by the artists.

A couple of pro-tips for this museum: they are pretty strict about not allowing large bags/backpacks into the galleries, and while there is a (free/by donation) coat and bag check available I recommend packing light if you can. Also, I found the museum cafeteria expensive and pretty lackluster -- I wish that at lunchtime we'd braved the cold and tried out this vegetarian restaurant, which has a location just around the corner on Rue Mackay, instead. 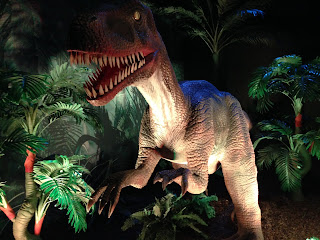 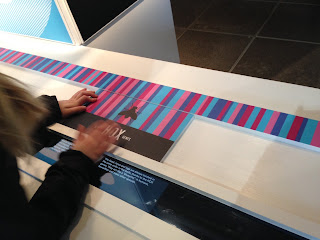 - Centre des sciences de Montreal / Montreal Science Centre: I have to admit, these sorts of places are usually low on my list of priorities when traveling. After all, if you've seen one science center (we have an excellent one in Seattle) you've seen them all, right? But my daughter wanted to go, and it was nearby and fit well with our other plans for the day, so off we went. And let me tell you, it was so great to have absolutely no agenda of my own and to just let her guide the visit. She loved the temporary exhibit featuring animatronic dinosaurs (of course), which was certainly entertaining if not really high on the actual science. We also spent some time in one of the permanent exhibits, about the human body and human evolution, which I thought was really well done -- engaging and accessible for my 8-year-old, but really meaty in terms of scientific content.

- Il Focolaio: Brick oven pizza place with lots of different pies on offer, including many vegetarian options. The food is a little heavy-handed, but oh, blessedly, they deliver to Old Montreal. 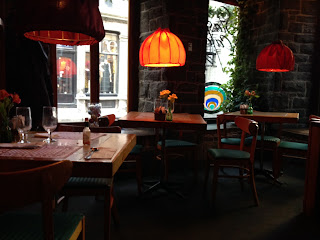 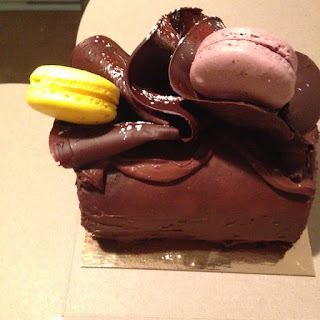 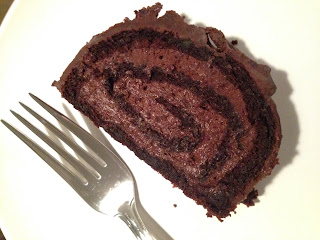 - Maison Christian Faure: This high-end pastry shop seems very old-school French to me, by which I guess I mean it seems to be staffed entirely by dudes. A little spendy, highly caloric, and absolutely worth the extravagance. 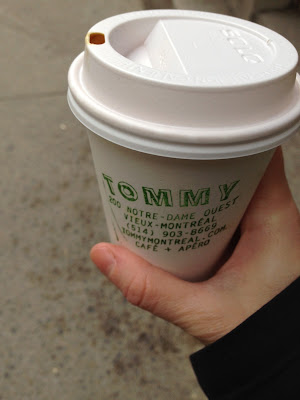 - Tommy: A little cafe/coffee shop in a beautiful old space a few blocks from Notre Dame Cathedral. Sure, this place is a little hipster-y, in that way that I am slightly embarrassed at being such a sucker for, but the staff are totally friendly and down-to-earth. And they make a fantastic latte. 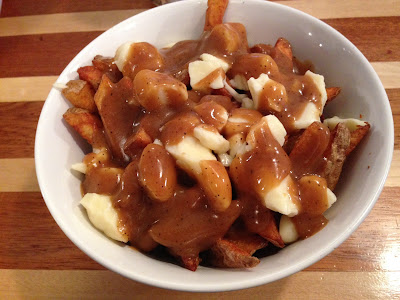 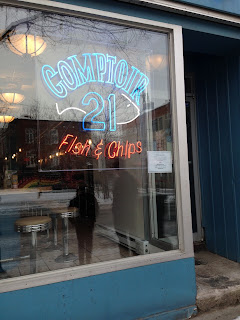 - Comptoir 21: This fish and chips joint is, oddly enough, said to have some of the best vegetarian poutine in Montreal. I can confirm that, indeed, it was the only poutine I have ever been served outside my house that I thought was worth eating (oooh, fighting words!). Three locations -- we visited the one on Rue Ste. Catherine. 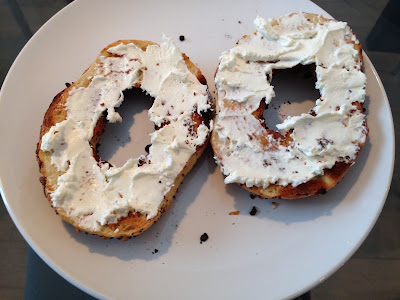 - Fairmount Bagel: Ah, Montreal bagels! Yes, they live up to the hype, although strictly speaking my husband is not sure they are worth walking 40 minutes in a blizzard for, so -- make your plans according to the weather, I guess.

- St. Viateur Bagel: I was sorry we didn't get to sample the offerings from Montreal's other iconic bagel maker. St. Viateur and Fairmount have locations a couple of blocks from each other in the Plateau Mont-Royal neighborhood, so I think the ideal thing would be to have a bagel bang-bang, no?

- Dolcetto & Co.: This restaurant in Old Montreal looked promising, an atmosphere to appeal to the grownups but some nice basic pizzas on the menu likely to be enjoyed by the kiddo.

- Espace pour la vie / Space for Life: We had to scrap our plans to visit this complex of nature museums in the Olympic Park at the eastern end of the city when, on the last day of our trip, a blizzard arrived and my daughter came down with a cold. Dangit. I was intrigued by the Biodome's exhibits on ecosystems of the Americas and the Planetarium's show about the Aurora Borealis; my daughter was bummed to miss out on the Insectarium. Next time, indeed!
Posted by Sarah at 4:53 PM