My mother-in-law is an avid quilter. Wedding, new baby, big-girl bed: she'll make a beautiful quilt to honor any and all of these transitions. To piece a quilt, she begins by tracing paper templates for each of her pieces onto fabric, over and over, and then cuts them out with scissors one by one.

I'm impressed by her purism, to be sure--she has made dozens of quilts and does not own a cutting mat, a rotary cutter, or even one quilting ruler.

But I'm all about the clever shortcuts that enable one to make two or four or eight blocks at a time.

It's not just that I'm impatient--though I am. For me there's also a kind of mathematical pleasure in seeing these tricks work out. In using fabric to play with geometry. So I'm impatient AND nerdy. Yeah, I'd say that pretty much sums it up.

But some shortcuts are better than others. Case in point, half-square triangles. Working on my sister's patchwork star pillow cover gave me an opportunity two compare two quick-and-easy half-square triangle methods head to head. Here are the results of my "cage match."

Over in this corner, we have the four-at-a-time method: cut two squares of fabric, place them right sides together, and sew all the way around the perimeter. Then cut the square in half on the diagonals, press the resulting pieces open, and voila! Half-square triangles.

There's no denying, this method is super quick and easy.

I used this method about a year ago to make a pillow cover for my mom, and with roughly 4-inch squares the results were pretty good. (In fact, at the time I described the tutorial I'd used as "mind-blowing.")

But the smaller 2-inch squares used in my sister's pillow brought out the weakness of this method: one you press those half-square triangles open, the sides of the squares are all on the bias. And somehow, sewing those short seams to join those tiny blocks makes things get wonky fast.

In addition, this method is not mathematically precise. The tutorial I've linked to above says that the beginning square size is the size of your desired HST divided by about 0.64. What this means is that you are in for a lot of fussy trimming.

Trim, sew, trim again...I felt like I needed to square up my block after sewing every single seam. Argh! And the results were not even that impressive--skewed points, wavy edges.

I am not doing a very good job of building narrative suspense about the outcome of this cage match, am I?

Anyway, over here in this other corner, we have the eight-at-a-time method: cut two squares, and draw two lines from corner to corner on the wrong side of one square. Put the two squares right sides together, and sew a quarter-inch seam on each side of each diagonal line. Cut along the marked diagonal lines, then cut each of the resulting four pieces in half, press open and voila! Half-square triangles.

This method is much more precise--both mathematically in calculating the size of the starting squares, and because it works with the grain of the fabric. In fact, the genius here is that you sew the bias seam in the center of a piece of fabric rather than along an edge, which stabilizes the bias seam.

I'd go so far as to say that this factor makes this supposedly "quick and easy" method superior to the uber-traditional method (cutting two triangles and then sewing them together along the bias) where precision is concerned.

(I used a tutorial with the same approach to bias seams to make my flying geese quilt a couple years ago, and I think that lucky choice of a good tutorial was a big part of the success I had there.)

Obviously there's more work up front with this method. But I'd say that means less work later, and if you hate doing a bunch of trimming (ugh--the waste! the tedium!) the effort of drawing a couple of lines instead seems like no biggie.

A downside, though, is that this method commits you to making eight half-square triangles at a time. Which is definitely part of the quick-and-easy factor. But what if you don't need that many HSTs from a given pairing of fabric?

Well, in that case, here you go--a two-at-a-time version.

Here are those two pictures again, just to make absolutely clear that the eight-at-a-time (or two-at-a-time, if you prefer) method is the hands-down winner: 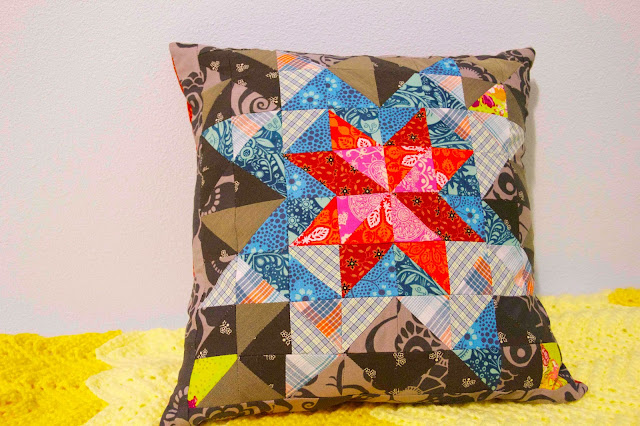 Anyway, I'm glad I've got that figured out, because someday....
Posted by Sarah at 7:50 AM