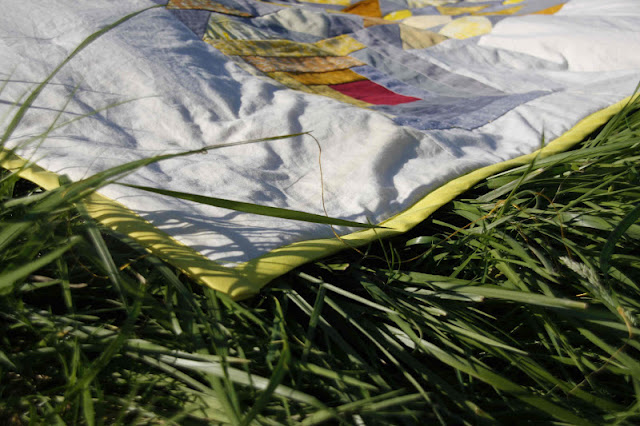 Sometimes I am not so good about following up in this space. Have you noticed? I'll be all, "I have a new project!!!1!! I'll tell you all about it when I'm done!" And then I…don't.

I was thinking about that in relation to the quilt I was making last summer for the Lo-Fi Festival. I showed you my geese and my log cabins but I never showed you everything all put together.

But I finished it! I really did! 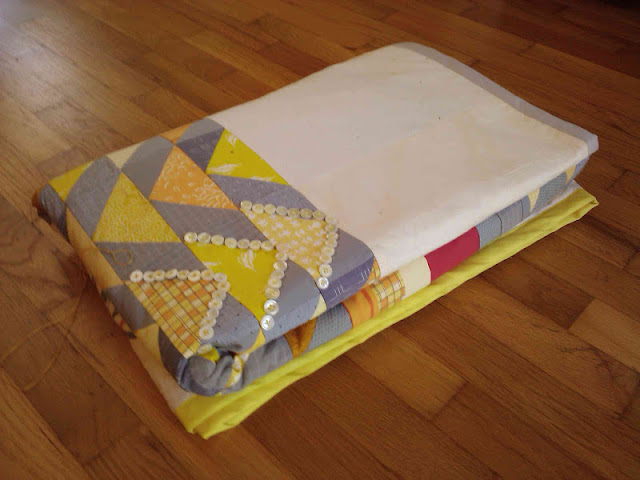 And I'm about to start on a new project for this year's Lo-Fi Festival (tickets on sale July 1!). So let's close the loop on this one, shall we? It was my first quilt and my first art festival, so I don't want to forgo a little crowing, even if I am about ten and a half months late. Plus, I wanted to record in one place some of my thoughts behind the design & the process.

The Lo-Fi Festival takes place at Smoke Farm, a former dairy farm located on the Stillaguamish River near Arlington, Washington. The theme of the 2011 festival was "Not To Scale," so I wanted to design a quilt that would be a kind of map, a microcosm illustrating the farm's land use history. 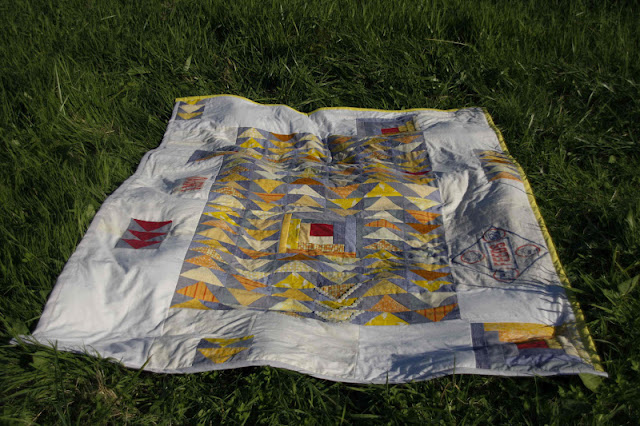 Why a quilt? I am interested in exploring scientific and ecological concepts through traditionally “feminine” media such as embroidery and quilting. Many traditional quilt patterns take their names from the biological world, like the "flying geese" pattern of triangles that form the center panel of this quilt. In a sense, you could think of quilts as a kind of highly stylized scientific illustration, a way in which women could document the natural world and produce a useful object at the same time.

Flying geese has always been one of my favorite quilt patterns. Here is a funny thing: I've noticed that many quilters arrange their flying geese so that the large triangles--what I think of as the "geese"--all point in one direction. But, ever the literalist, I have always felt that they should be arranged in alternating directions, like flocks migrating back and forth. It was only after looking at many flying geese quilts in the course of designing and making this one that I realized that in the standard orientation, the small triangles in the blocks actually pair up to make geese flying back the other way. Okay. I get it now. But secretly, I still think my way is "right."

But there's another side to quilts, too. They were made by people who weren't just documenting the landscape but also changing it by their presence. So in my quilt, I used log cabin blocks (another pattern I've long admired) to disrupt the flock, and displace some of the geese from the center panel. Those geese are pieced into the borders of the quilt, which gave me the opportunity to indulge in some biology geekery. See the small flock of red geese there at the edge? An isolated, genetically distinct remnant population. And the one red goose in the larger yellow and orange flock? Hopeful monster. 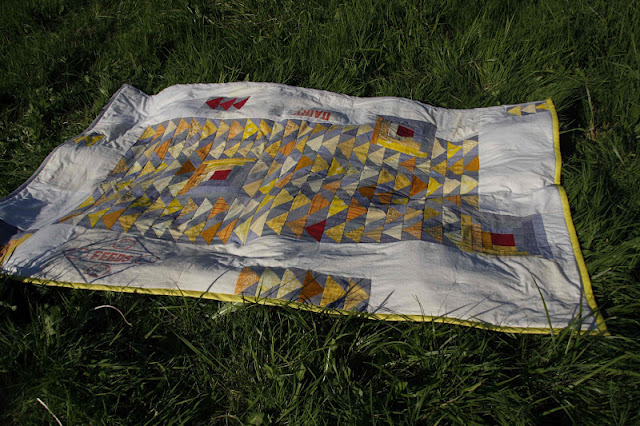 The blocks are pieced from a mixture of quilting cottons and secondhand fabric, mostly from men's shirts. (It was actually pretty hard to find shirts in the orange-y yellows that I wanted to use. But how amazing is it that I found a one the exact shade of red that is traditional for the center of log cabin blocks?)

After taking apart all those shirts I was left with a lot of buttons. I sewed some of them to the quilt along the outlines of several geese, an homage to the button blankets made by several Native American tribes in this area. (And one more art/craft form that has appealed to me for a long time. I'm kind of tickled that this quilt assembles a number of different aesthetic elements that I love, but it tells a story that's ambivalent.) 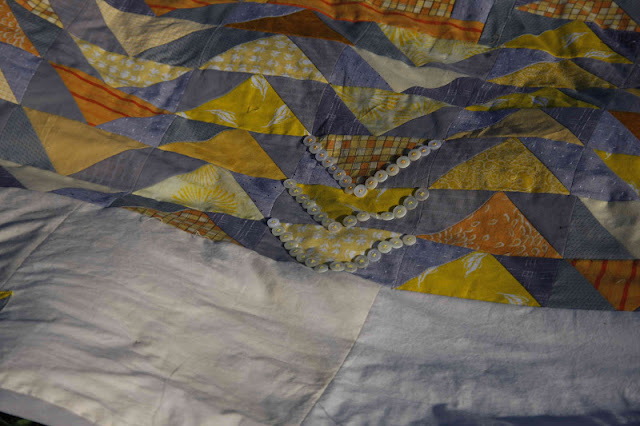 The border is made from various muslin-type fabrics and sections from a vintage dairy feed sack (a reference to the historical use of feed sacks in quilts, as well as the site's former incarnation as a dairy farm).

This was a really interesting object to work with. The construction seemed semi-industrial, if that makes sense. Clearly not handmade, but a little bit irregular. I could imagine Mrs. Kunkel turning out the sacks on her treadle sewing machine. Once I got the stitching undone, I was surprised that there was a fair amount of fabric there. I felt like I was getting a peek at long-past domestic economy: 100 pounds of animal feed = the back of a crib quilt. 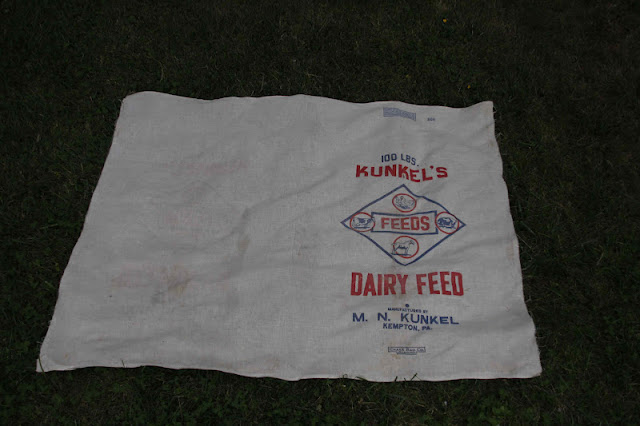 What I failed to consider was that a vintage dairy feed sack was going to come with bits of vintage dairy feed stuck to it. And that it was going to smell like it had been in a musty barn for 40-odd years. But I couldn't wash it, and this picture shows why! This is how you really know it was old--it was meant to be reused. That and the particulars of these washing instructions. 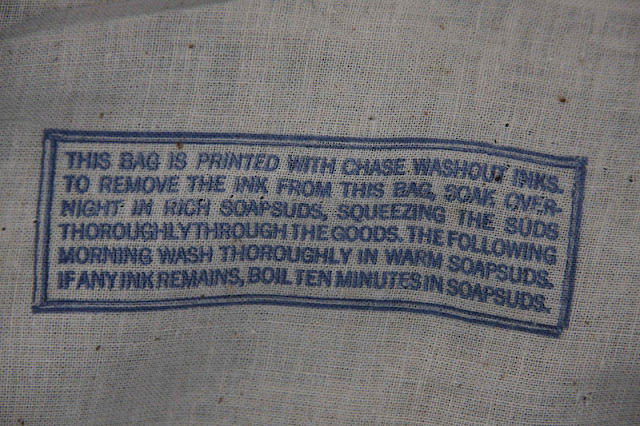 The back is pieced from leftover pieces of shirt, quilting cotton, muslin, and feed sack. I like the landscape-y quality. The prints on a couple of the gray shirts remind me of seedlings, or rain. 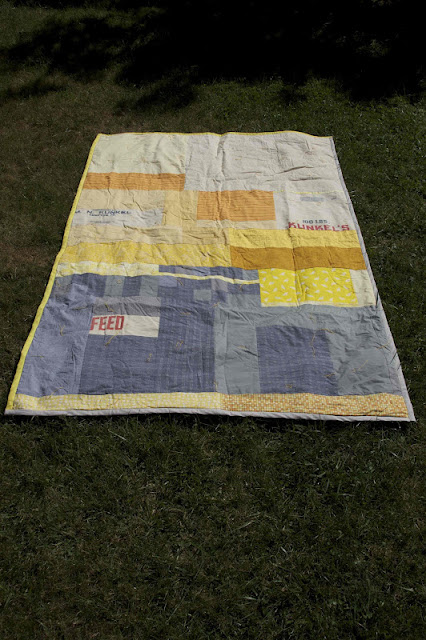 I tied the quilt, making the ties come out on the back (rather than on the front), with the idea that they would look like "roots." I left some of the ties really long. 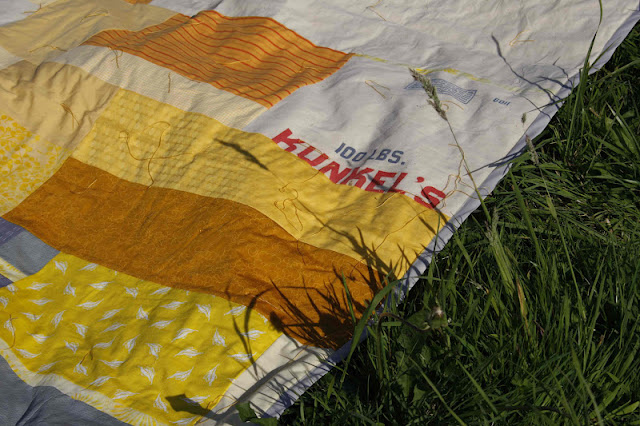 To install the quilt at the festival, I threaded the long ties onto a curved needle and worked it through the turf, sewing the quilt to the pasture at the farm. ("Putting down roots," literally.) 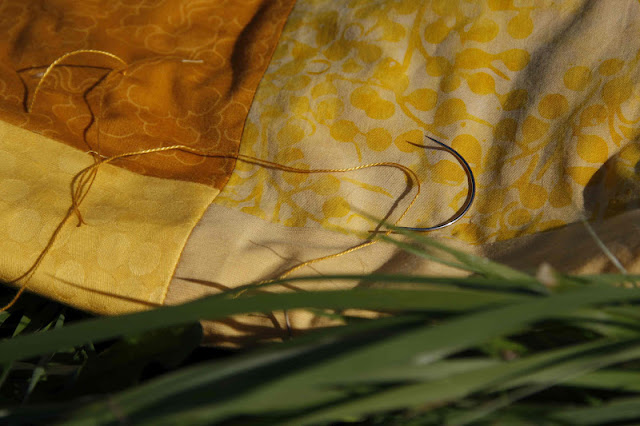 The funny thing was, I hardly had a space in the house that was large enough to work on the quilt, but once I got it out in the pasture it seemed SO small. "Not to scale, indeed." 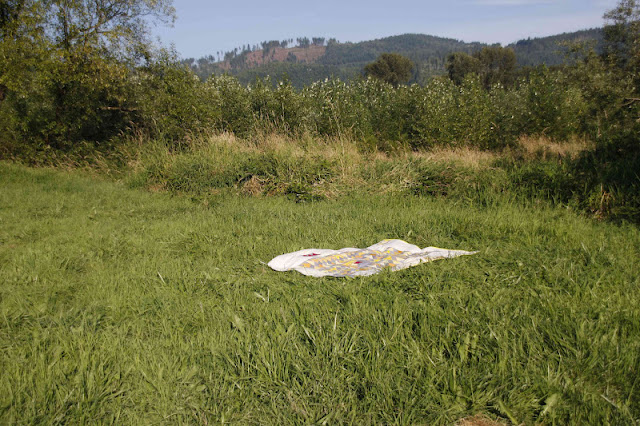 The quilt begins to become integrated with its environment... 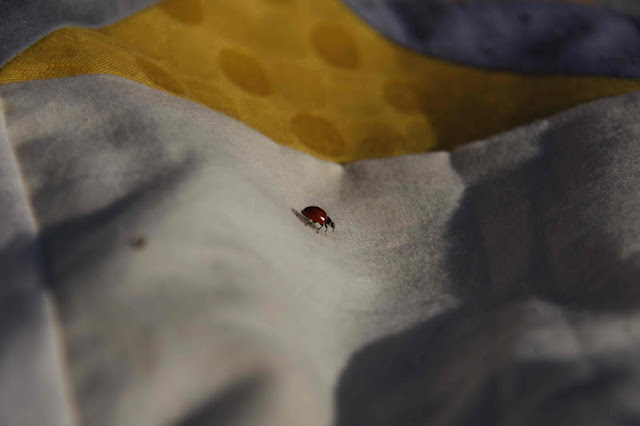 …and acquires history--the footprints of a mischievous dog. 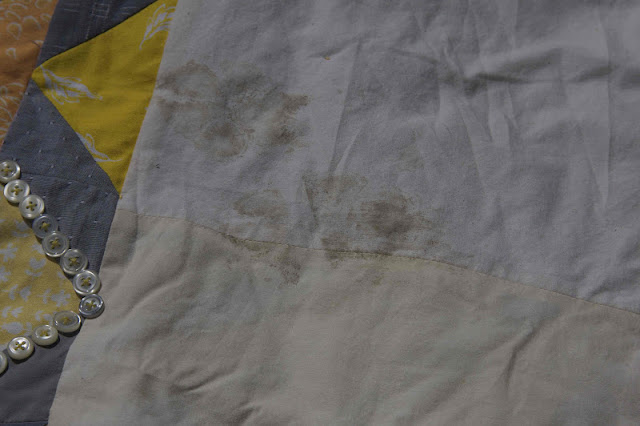 At the end of the festival, I snipped the threads that were woven into the turf to remove the quilt from the pastures. I had the idea that both the quilt and the site would be changed--if in a very subtle, minor way--by their time together. 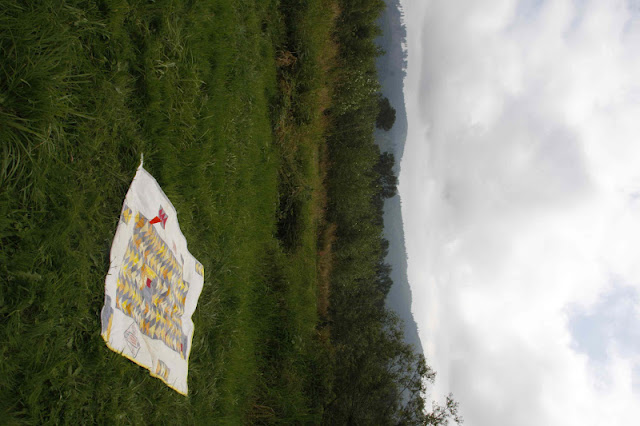