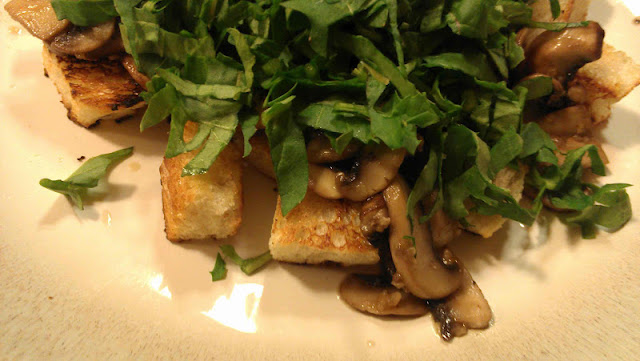 I promised a while back to share a recipe for sauteed mushrooms topped with arugula. I almost forgot! But here I am.

This dish was inspired by Ocho, a tapas restaurant here in Seattle that is a favorite date night destination for my man and me. Seriously, we get out once a month and I think we've been there at least four times in the past year, which, if you do the math, works out to quite a strong recommendation. The food is affordable (downright cheap for the quality), the cocktails are strong (I especially recommend the Dark & Stormy), and it's vegetarian-friendly (pretty rare feat for a tapas place).

One of our favorite tapas there is a kind of crostini topped with sherried mushrooms and a big mound of slivered arugula. The mushrooms have a subtle, pleasant heat that plays nicely off the sweetness of the sherry, and it turns out that the secret to this is just a little bit of cayenne pepper.

From a recipe for mushroom ragout in Yotam Ottolenghi's cookbook Plenty I took the idea of serving the mushrooms over croutons rather than slices of bread. This is a big improvement as it makes the deliciousness easier to shovel in one's mouth in large quantities.

The recipe below makes a light lunch or dinner for 2 people. I'd say it would probably serve 4 or more as a starter (before paella, perhaps? I'm eager to try the vegetable paella recipe in Plenty) or side dish. Or, you could make it a more substantial main course with the addition of that universal culinary solution, the poached egg.

Heat a large skillet over medium heat and coat the bottom with a very thin layer of oil. Throw in the cubed bread, sprinkle with a bit of salt, and cook, stirring occasionally, until the bread is nicely toasted on all sides.

Meanwhile, heat another skillet over medium heat and add about a tablespoon of olive oil. Add the sliced mushrooms and a pinch of salt, and stir to coat with the oil. Mince or press the garlic and add to the pan, along with the cayenne. Saute, stirring occasionally, until the mushrooms begin to soften. Then add the sherry and continue to cook until they are very tender and the liquid in the pan has cooked down to a glisten.

To assemble, place croutons on a plate, top with mushrooms, and then a shower of arugula.