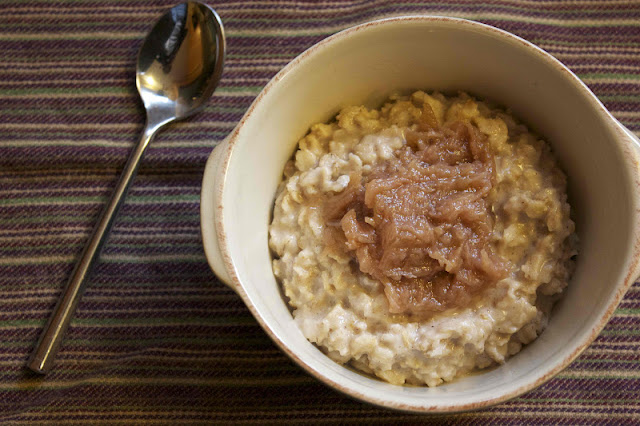 Decadent? Porridge? I know, the cognitive dissonance is overwhelming, but hear me out. You get two tasty breakfasts, and a head start on cocktails later. What could be better?

In the recipe below I've given measurements that are convenient, in the sense of using up a whole can of coconut milk; whenever I make a recipe that uses only part of a can the remainder seems to languish in the fridge until moldy. But, be warned, you will likely run out of rhubarb before you run out of oatmeal. Double, halve, or eat plain oats as you will.

To make the stewed rhubarb, combine the sugar and water in a small pan over medium heat. When the sugar has dissolved, add the rhubarb and simmer gently, covered, for about 30 minutes, until the rhubarb is falling apart. Cool briefly, then pour the contents of the pan through a fine-mesh strainer, catching the liquid in a bowl underneath. The very tender rhubarb that remains in the strainer is your compote to eat with your oatmeal, but don't throw away the liquid: you've just made rhubarb simple syrup. Use it. Again. And again.

To make the oats, combine the coconut milk and water in a saucepan, and stir until they are evenly combined. Add the rolled oats. Cook, stirring occasionally, over medium-low heat until the oats are creamy and tender.

To serve, spoon the oats into a bowl and the rhubarb on top. 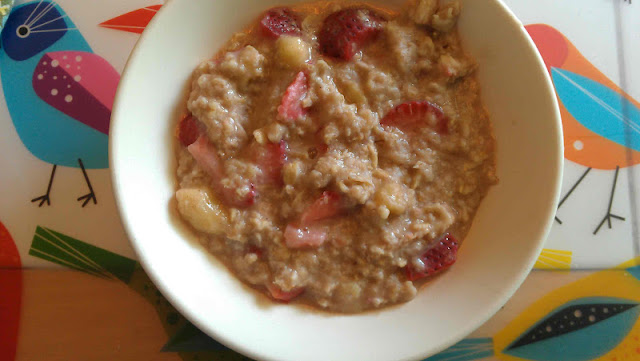 I came up with the above recipe because I thought my girl might enjoy oatmeal made with coconut milk. Spoiler alert: No. The recipe below was a bigger hit.

Combine the oats and water in a saucepan. Cut the banana into the saucepan in bite-size chunks. Wash and hull the strawberries, and slice them in thick slices into the pan. Add the cinnamon and brown sugar. Cook, stirring occasionally, over medium-low heat until the oats are creamy and tender.