When I first posted this list, my friend E. commented, "Do you have a plan for pacing yourself or setting deadlines within the 1,001 days? I love this idea, but wonder if I'd lose momentum after a while or get sidetracked by other stuff that comes up."

Well, as you could probably gather from my silence this past fall, I did get sidetracked by other stuff that came up.

As it happens, the first 100 days was up January 2. (So, of course, I have gotten sidetracked from this post, too! I've had this tab open in my browser pretty much since then.)

I had set a reminder for the first 100 days on my calendar in Outlook, and when this popped up about a week beforehand it served as a push to try to knock off a few more items and bring my total to 10.

Below are the items I've accomplished so far, with photo proof.

I'll be the first to admit that many of these items are seriously remedial, unfuck-your-habitat type things.

But I hope that tackling these easy items will create a bit of momentum to help me face the more involved projects. I also hope that being spurred by the list to do some of these easy things might help create a habit of taking care of such tasks in a more timely way, sans list, if that makes sense.

Finally, don't underestimate the improvement that even a seemingly tiny task can create! To no longer have to look at a useless plastic hook in the middle of the bathroom wall, or cringe when I open the bedroom door and it screams like a banshee, is very, very nice.

Blogger Sanae Ishida recently posted about "tolerations," a concept that she borrowed from a friend who borrowed it from a life coach (still with me?). "Tolerations are basically anything that is part of your life that is mildly to moderately annoying," she explains. "Aspects that grate on our nerves but aren’t high priority enough to require immediate attention and so we let them fester. The coach explained (to my friend) that individually, these tolerations aren’t a big deal. But collectively, they drain away your mojo, subconsciously adding to your stress and ultimately, you are less productive and more prone to procrastination."

It struck me that many of the items on my list fit the description of "tolerations," and yes, indeed it does make a difference to cross these seemingly minor items off.

I have posts planned to talk more about a few of the items below, but many of them are pretty self-explanatory so this post will be the record of their completion.

We bought this stereo when my girl was an infant, and it yielded many months of naptime womb sounds, Caspar Babypants dance parties, and bedtime audiobooks until it finally gave up the ghost last summer. My girl got a new music machine for her birthday; it sits on her (disaster of a) dresser. But did we bother to remove the old, broken one? No, indeed. 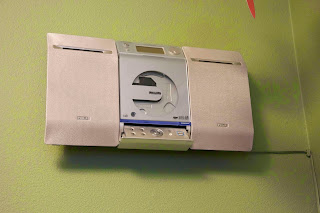 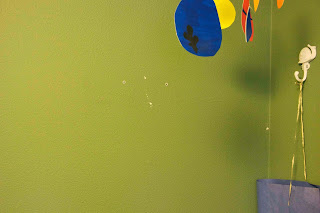 13.  Lay down weedblock over remainder of front lawn

Bit by bit we have been eradicating our front lawn, with the aim of converting it to a nice landscape of ferns, heathers, and perennials. We took out about one-third of it a year and a half ago, and I tackled killing the remainder this past fall. (This was done in early October, which is why the landscape looks so unwintry.) 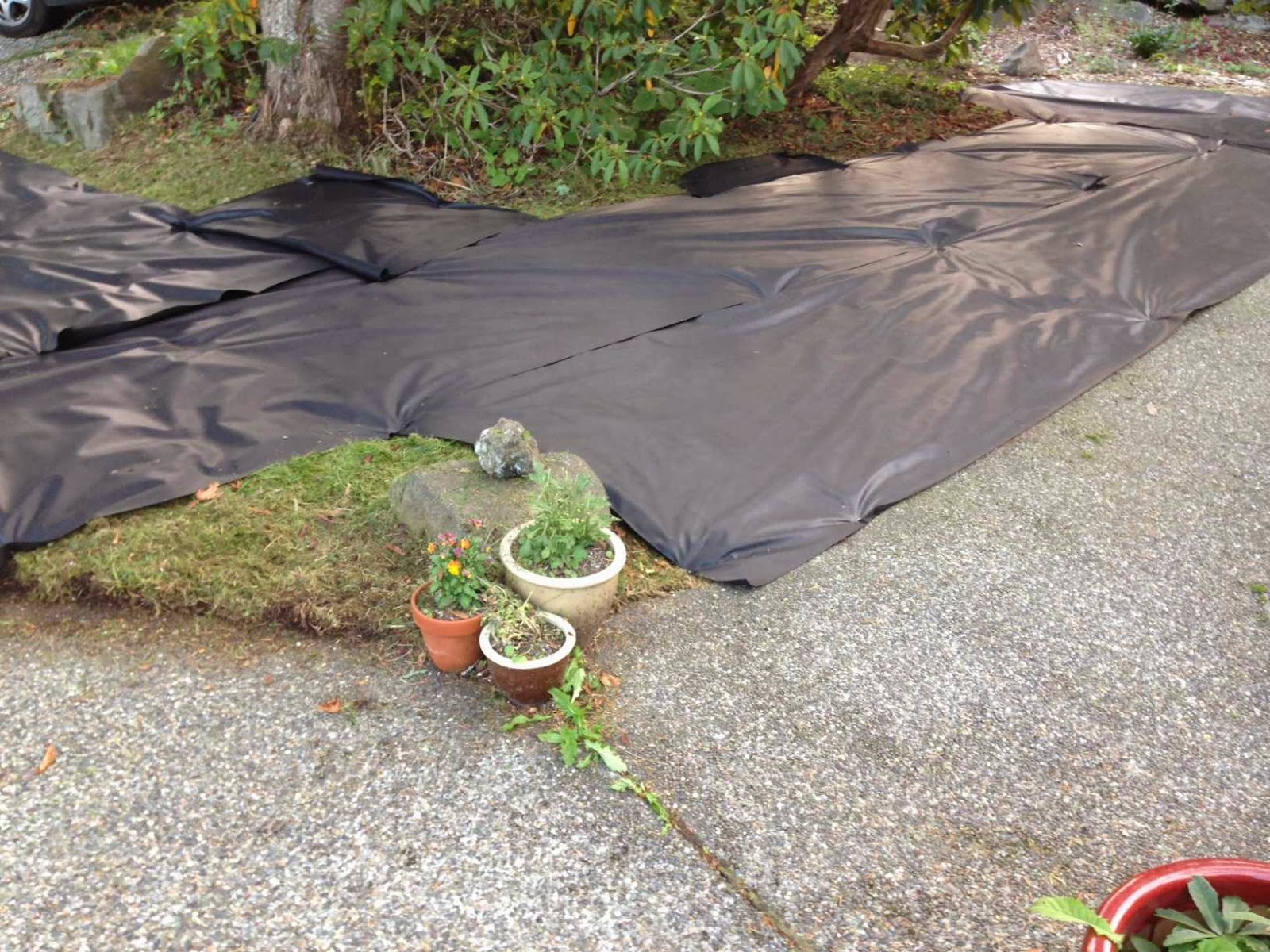 The man next door, who is a very kind and generous neighbor but from a different generation and more, shall we say, conventional about landscaping, asked me when we were going to put down soil on top of the weed block I installed. I tried to find some way of telling the truth, which is, "Hmmm, sometime around April if we're lucky," without actually letting him realize that it wouldn't be until April. 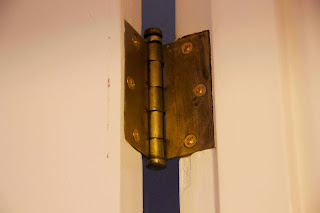 I can take no credit for this, by the way, my man went through the house with a can of WD-40 while I lay in a jet-lagged stupor soon after we returned from our Amsterdam trip. But it's done, and that's what counts!

26. Find a better way to store bags and purses (also, have fewer of them)

I am not sure why, but at some point I developed the habit of hanging my purses (in use and otherwise) over the knob of the office/guestroom door, as well as over the doorknob of the closet in that room. Messy looking and inconvenient for anyone who needs to open and close those doors (and sort of embarrassing, because the closet belongs to my man -- it would be one thing if my bad habit were only inconveniencing me but it's not really fair of me to create "tolerations" that mostly affect him). 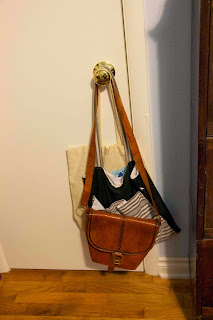 So now my purses are hanging on hooks inside my own tiny, tiny closet in the master bedroom. 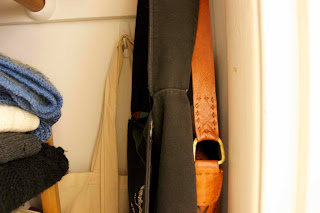 For the record, I did pare down my collection as well. And miracle of miracles, I'm cultivating a new habit of hanging the purse I'm using in the coat closet along with my coat (rather than piling one or both of those items on the kitchen counter). Sometimes one good habit begets another.


Bathroom
44. get plastic hook off wall

I put this Command hook up on the bathroom wall when my girl was potty-training; we hung one of those little plastic potty seats on it for her to use so she wouldn't fall in. :-) Of course, she stopped needing the plastic seat about three years ago, and I've been (intermittently) warring with the hook ever since. 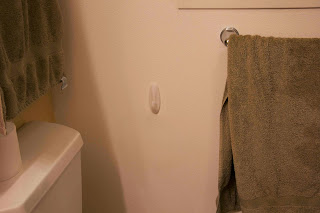 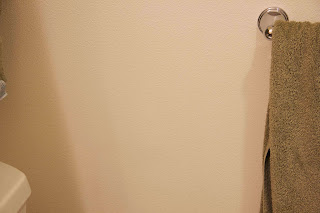 It took two spoons, a foot and a half of dental floss, and a butter knife, but to repeat, I WIN.

(Eagle-eyed readers will note that item #44 involved removing a Command hook, while item #26 involved installing two new ones. Call it the definition of insanity, I guess.) 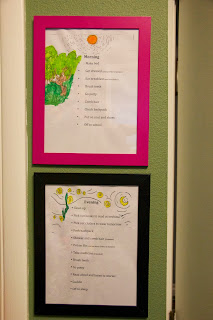 You've seen these before. I realized when I started writing up this post that we really weren't even using them anymore, but then I came up with the idea of having my girl earn screen time by getting points for doing each item on the lists without a fuss. I won't say our mornings and evenings are totally without strife, but at least it feels like we're on the same team.

Dining Room
79. Figure out how to store and keep track of napkins that are in use. 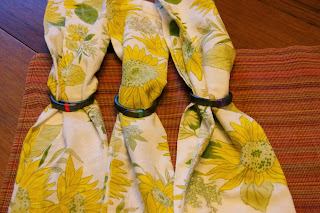 Living Room
85. Get a better tray for tea set

I thrifted this wicker tray, teapot, and cups when my girl was about to start Kindergarten, with the idea that we could have tea together in the afternoons and do homework/work at the dining room table. But the tray has started to seem a little musty, funky, and hard to clean, so I wanted a better one. 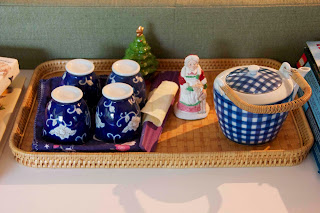 But it occurred to me that honestly, we don't have tea after school all that often. My girl has activities most days after school and it just doesn't happen. Leaving the tea set out resulted in it getting covered with cat hair, and the tray itself had become a clutter magnet, which is obvious from the picture above.

My girl really likes to have tea parties, so I didn't want to get rid of her teapot altogether, but I tucked it away in a cupboard where at least it's likely to stay a bit cleaner. 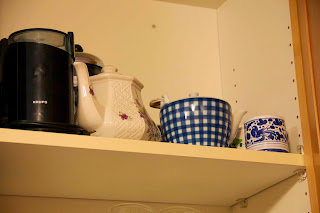 And the console table in the living room -- far from perfect, but getting a little clearer. 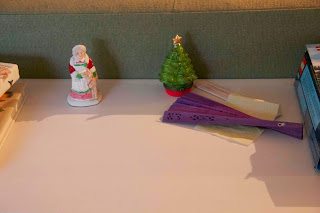 88. Get rid of screen, install curtain rod over cat box and make curtain 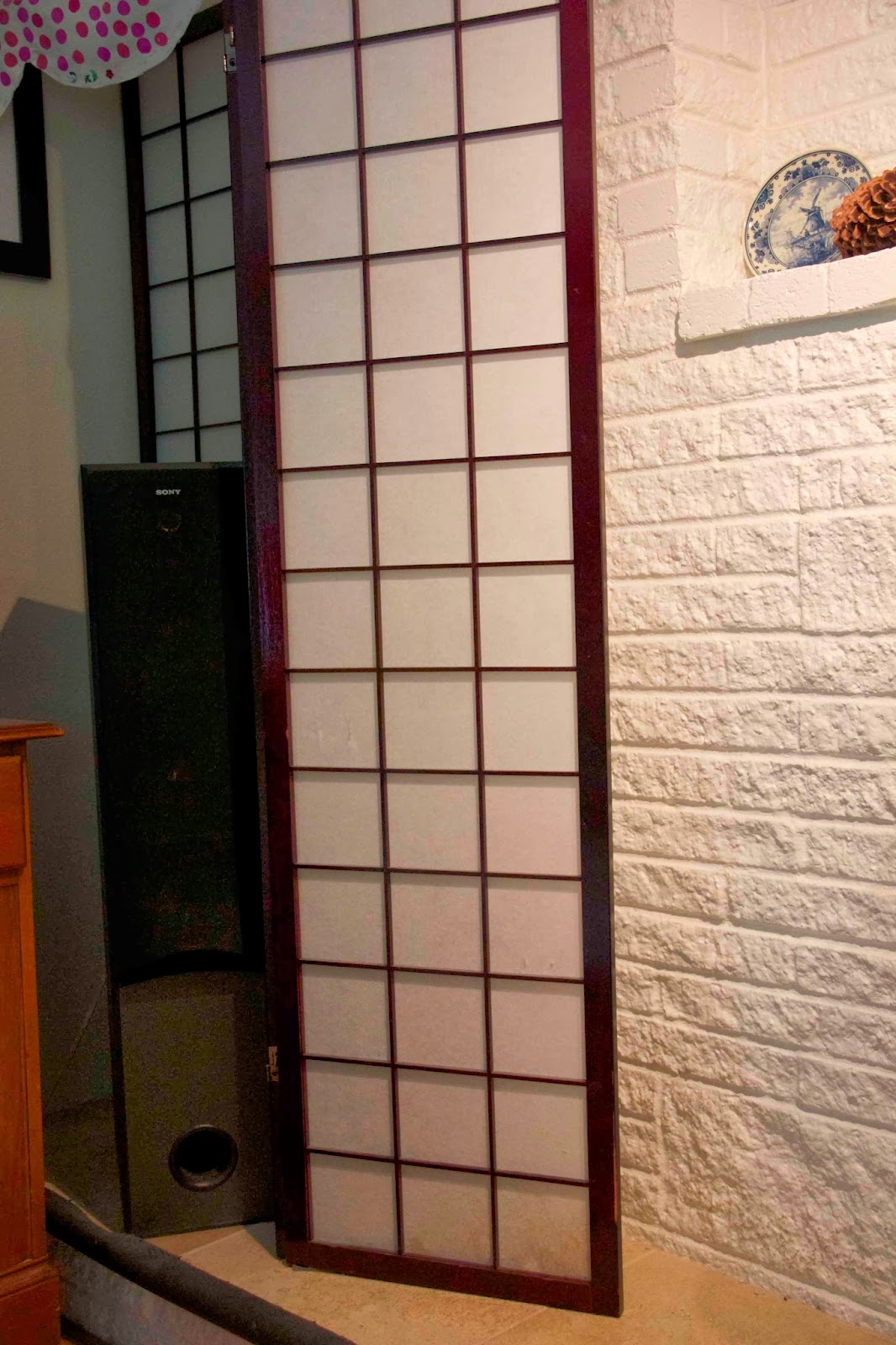 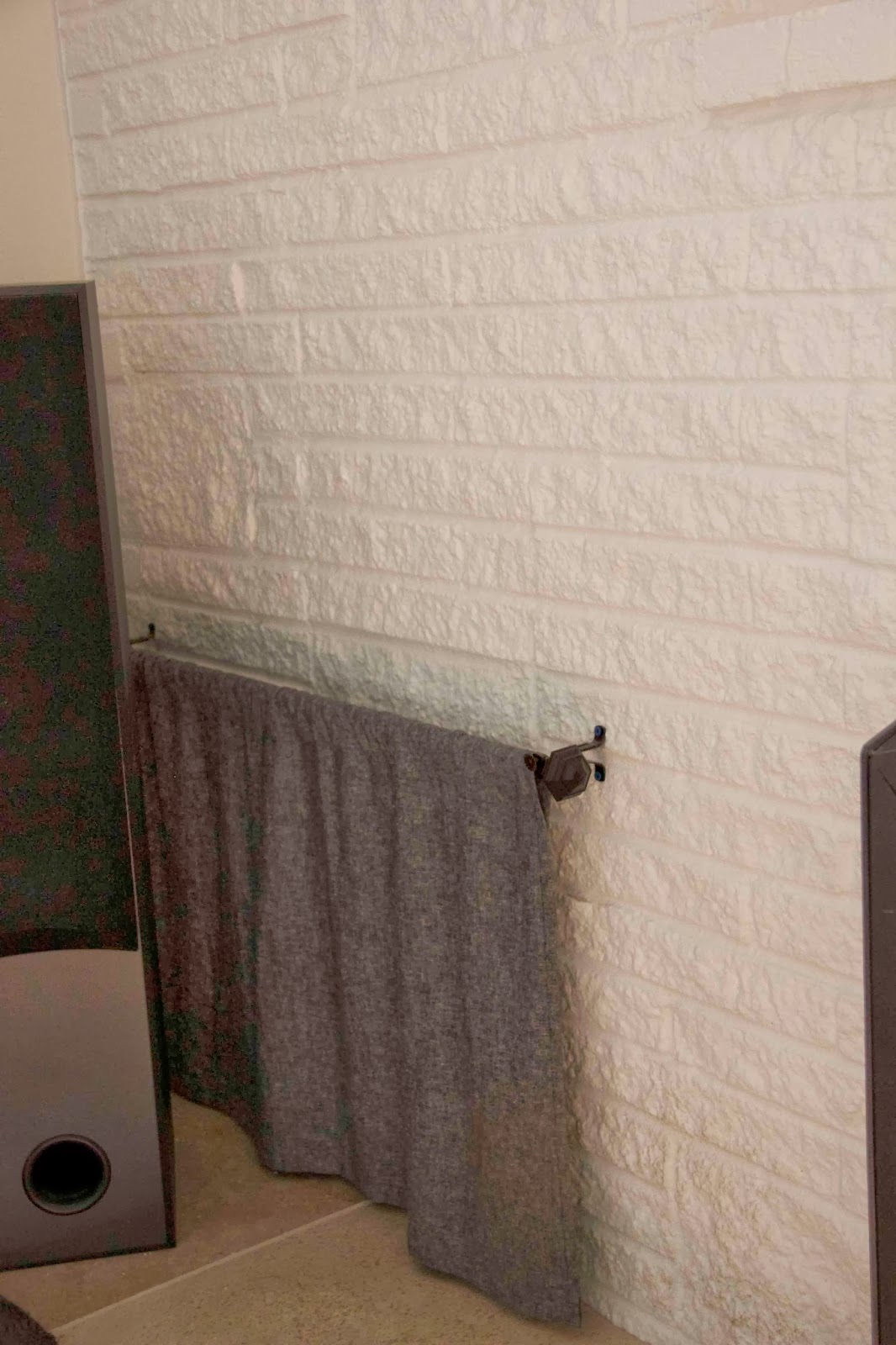 Office
94. Clean out corner behind door

Oh, this little corner behind the office door. It just seemed to attract crap. 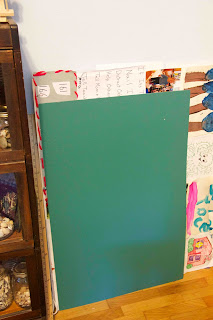 But now it contains less crap, and what remains is tucked away a bit more tidily, so the cutting mat is less likely to repeatedly fall into the middle of the room. A definite improvement. 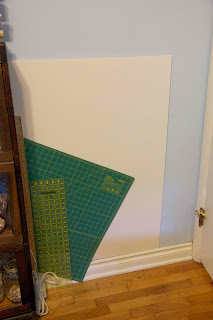